The sharp fall in sales in 1998 was mainly a result of plummeting sales, not only in Japan, but also in the Republic of Korea. Sales in these two countries fell by 21 per cent and by as much as 75 per cent, respectively, compared to the 1997 level (see Table I and Figure 1). 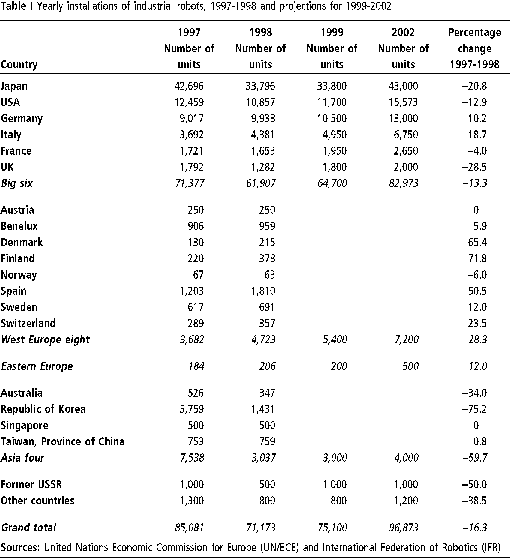 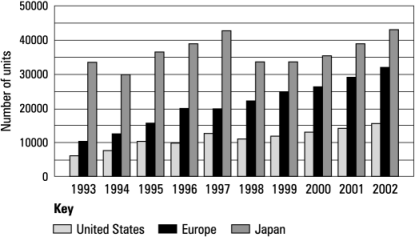 A steady growth in the European robot market

Growth in 1998 was, however, rather unevenly distributed among countries. In the eight smaller western European countries growth was as large as 28 per cent (see Table I). In Spain, Denmark and Finland, growth varied between 50 per cent and over 70 per cent.

Among the larger countries, Germany recorded a growth of 10 per cent and Italy 19 per cent. In France sales dropped by 4 per cent, and by as much as 29 per cent in the UK. This, however, is not unusual for the UK, which has for years shown a pattern of surging growth every second year and sharp falls in the years in between.

Asia is a depressing market - for how long?

As was shown above, sales plummeted in Japan and the Republic of Korea. In Singapore, Taiwan, Province of China, Thailand and other Asian emerging markets, the previously good conditions for robot investment have come to a halt - at least temporarily (see Table I). In Australia the market fell by 34 per cent.

Estimate of the worldwide operational stock of industrial robots

Japan accounts for more than half of the world robot stock. Its share, however, is continuously diminishing. In 1998, the robot stock in Japan actually fell in absolute numbers. 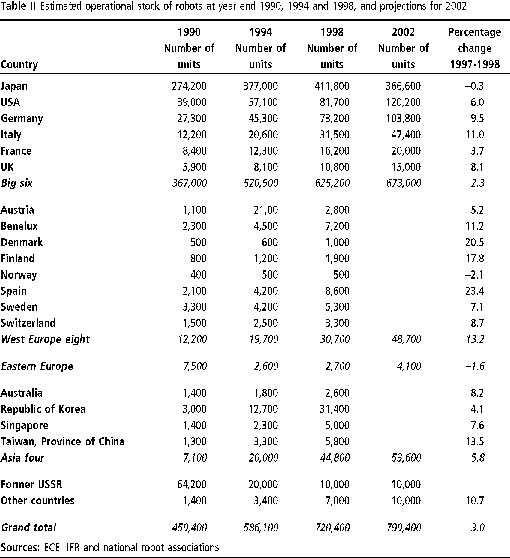 The world market for industrial robots is projected to increase from 71,000 units in 1998 to 97,000 in 2002, or by a yearly average of 8 per cent (see Table I and Figure 1). These projections are significantly revised downwards, compared to those in the previous issue of World Robotics, mainly because of projected stagnation in the Asian markets.

Sales in Japan continue to be sluggish . . .

Sales in Japan are projected to be flat in 1999 compared with 1998. By 2002, however, sales are projected to have recovered to the 1997 level of 43,000 units (see Table I and Figure 1). In this context it should be noted that a very large share of the new robots supplied will replace older robots taken out of operation. In 1997, for instance, more than two-thirds of the Japanese supply were replacement investment. In 1998 more robots were estimated to have been taken out of operation than new robots installed. In the late 1980s and early 1990s, before the economic slump occurred in 1992/1993, a large number of robots were installed in Japan. The peak occurred in 1990 with over 60,000 robots installed. At the end of the forecasting period these robots are most likely to be replaced. For this reason higher growth rates are projected for the end of the forecasting period. Despite this, the stock of operational robots is expected to contract continuously.

When comparing the data for individual countries, the reader should note that some countries report a much higher share of simple three-axis robots than other countries. They might also include equipment which, although formally satisfying the definition of industrial robots, is not included in other countries' statistics, e.g. automatic assembly on printed circuit boards.

Operational stock of robots continue to show steady increase, except in Japan . . .

In terms of units, it is estimated that the worldwide stock of operational industrial robots will increase from just over 720,000 units at the end of 1998 to 800,000 at the end of 2002 (see Table II). It is interesting that the operational stock of robots in Japan is projected to decrease from just over 410,000 units in 1998 to just under 370,000 units at the end of 2002. This implies that Japan's share of the worldwide stock of robots will fall from 57 per cent in 1998 to 46 per cent in 2002. The reason for this is, as was shown above, that the retirement of robots is higher than the new supply.

In the first half of 1999, worldwide order intake surged by 36 per cent, compared with the same period in 1998. This figure, however, hides some major differences between regions. While order intake from Europe increased by 32 per cent, it skyrocketed by 90 per cent in North America. In Asia the market was flat.

Looking at order intake by industrial branches, there are also big differences in growth. Orders from the motor vehicle industry, excluding component manufacturing, surged by 101 per cent on a worldwide basis. In North America it skyrocketed by 214 per cent, compared with the same period in 1998. Order intake from component manufacturers to the motor vehicle industry and the aggregate of "all other industrial branches", on the other hand, each increased by just under 10 per cent in the first half of 1999, compared with the same period in 1998.

Relative prices of robots are falling and their profitability increasing . . .

Nominal prices of robots are following a falling trend. In addition, when taking into consideration significant improvements in performance, prices of robots relative to labour compensation have fallen even more sharply during the 1990s than nominal prices show. This implies that the profitability of existing robot installations is increasing, while at the same time more and more potential robot applications will satisfy sufficient profitability limits and hence be realized. As the relative prices of robots are projected to continue to fall, and a labour shortage in certain countries remains a possibility, the diffusion of robots might accelerate faster than projected. In the long run (ten to 15 years) of falling relative prices, labour shortages and quality aspects in production will be further reinforced as the driving forces behind continued high volumes of robotics investments. In the present and previous issues of World Robotics, case studies have given illustration to the above conclusions.

A service robot is a robot which operates semi or fully autonomously to perform services useful to the wellbeing of humans and equipment, excluding manufacturing operations.

There are many difficulties in collecting reliable statistics on service robots. However, based on a survey carried out by ECE and IFR, the total world stock of service robots at the end of 1998 can be estimated at a minimum of about 5,000 units (see Table III). When, for instance, cleaning robots and lawn mowing robots have reached such a level of cost-effectiveness that they can be affordable not only for professional use but also for households, where the degree of utilization can be counted in only a few hours per day, then the market for service robots could rapidly take off. Other important growth areas for service robots are household robots, robots for handicapped and disabled persons, and, above all, robots in the medical field used and designed for robot-assisted surgery. 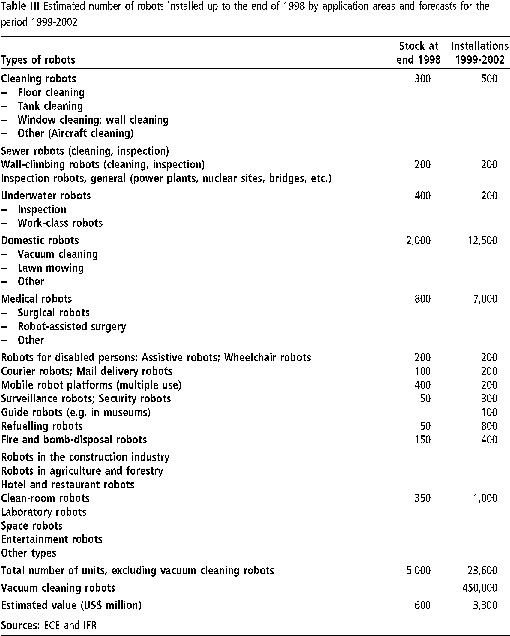 In the period 1999-2002, it is projected that almost 24,000 service robots will be installed and possibly also as many as close to half a million vacuum cleaning robots (see Table III). The figures above do not take into account sales of low-end entertainment robots which might be estimated at several hundred thousand.

Taking a longer-term perspective, say ten to 15 years from now, domestic service robots can very well have entered into a diffusion process similar to that which the PC, the mobile telephone or the Internet have had in recent years. In fact, the wide usage of the latter type of equipment greatly facilitates the introduction of service robots. Today or in the next few years almost all homes in western Europe will have PCs, mobile phones and Internet connections. The acceptability of "digital knowledge", or at least familiarity with it, in particular among young and middle-aged people, will smooth the transition of robots into our homes.

Increasingly, various types of tools and equipment in our homes (heating systems, fire and burglary alarm, stove, oven, refrigerators, etc.) will incorporate microcomputers and, above all, will be able to communicate with each other, by cable, electricity wiring or by infra-red or other wireless modes of communication. We will be able to control them remotely, using mobile phones as terminals. In this environment, domestic robots will serve as an important link between the various types of computer-controlled equipment and systems in our "wired" homes.

With the above-described complementary technology in place and with improved performance of domestic robots at a lower price (i.e. following a similar curve of price/performance ratio to other electronic goods), a potentially huge market is opening up. Modular designed robot platforms - to which various types of utilities, e.g. for vacuum and other types of cleaning, can be attached as well as articulated robot arms, various types of sensors and vision systems - could carry out a variety of tasks in our homes. They could vacuum clean, scrub floors, empty the dishwasher and place the china in the cupboards, lay the table, take out the garbage, open doors, guard the house against fire and intruders, mow the lawn, increase the mobility and security of old and disabled people, and much more. Increased functional flexibility will allow one robot system to free us from a number of routine jobs.

How much do we value our leisure time? It is reasonable to assume that it is a function of our hourly income, and the amount of leisure time left after having carried out professional work and necessary household tasks. If the time saved through using domestic robots is used for paid work, then it is easy to relate a value to the freed time and, from that, to attach an income to the domestic robots. For high income people there will thus be strong incentives to use domestic robots.