Having recently moved into a brand new factory extension in Bridgend, the compression moulding division of Atlantic Plastics is looking to robotics to play a major role in maintaining the company's position as a world class manufacturer of water management systems.

As well as deflashing, the robot can also be used to drill out fixing holes.

An indication of the pace at Atlantic, the first robot was installed in the compression moulding division in January 1997, by September 1997 another two had been installed, a total investment of around £180,000.

The robot cell was designed by Coventry-based FANUC Robotics. It is used to deflash compression mouldings for sleeves and boundary boxes for the water industry (see Plate 1). These are the boxes installed on property perimeters and can contain water mains taps and water meters. These mouldings weigh up to 3kg.

Each robot cell has twin tables so that load/unload time can be out-of-cycle run-on.

FANUC Robotics designed the twin station cell and all the perimeter guarding to comply with all the relevant health and safety regulations. Each table has a pull down interlocked door that must be closed before the start button is functional.

Within each cell there is a FANUC M6i robot which is fired with a Persk inverter controlled spindle at the end of the arm. This can run at up to 20,000 rev/min. Because the Dough Moulding Compound (DMC) is abrasive, diamond coated routeing tools are used.

As Wayne Barge, moulding shop supervisor says, "This is a relatively simple deflashing operation, but the savings are enormous. One robot cell with a loader has the same output as five operators manually processing the parts".

With a cell costing around £60,000 and labour requirements cut by four operators, it is easy to calculate that the payback for the investment is about one year. With such a rate of return, it is easy to see why another two robot cells were quickly added once the first had proved itself. 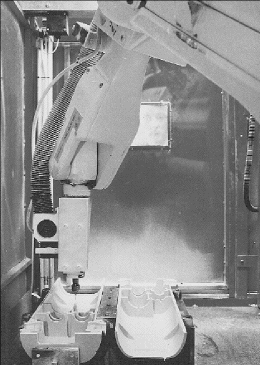 The robot's cells are located with a compression press on either side. For stage II of the automation, each press operator will only load the cell table that is adjacent to his machine. There will be no dedicated robot operator. The production cell, as a whole, then will balance with a two-minute moulding cycle for each press, then the two minutes for every other robot cycle.

Without any further investment that will eliminate all direct labour costs associated with deflashing. For Atlantic, a rapidly expanding company, that will enable trained labour to be deployed to other parts of the company.

To give an indication of current growth rates, the 1996 turnover was approaching £10 million; for 1997 it is likely to be nearer £15 million. An important part of the growth is long term major contracts with the major water authorities, both in the UK and Europe.

For example, a recent five-year contract to supply boundary boxes which contain water meters and stop taps was placed by Anglia Water.

Commenting on this order Wayne Barge said, "Before placing the order Anglia really put us under the microscope. I'm sure our vision of automation as a major factor in maintaining product quality played a major role in the favourable decision".

The experience to date at Atlantic convinces them that robotics is the way forward. As Derek Moore, manufacturing manager says, "The future lies in linking what are discrete operations into one automated function. Robots provide a flexible method of doing this on a step-by-step basis". He contrasted this with dedicated special purpose machines that tend to be all or nothing solutions without the flexibility that is inherent with robots.