In 1995, Dunlop Cox, engineers from Nottingham, bought an automatic assembly system from Modular Automation. The system makes automotive seat components for the Nissan Primera range. It is just one of a range of Modular Automation assembly machines in the plant.

The system is dominated by a pair of Comau 25 KG, six-axis robots which make automotive seat components faster, more accurately and at less cost than would be possible using traditional assembly methods. It consists of two robotic cells each a mirror image of each other.

The process itself is quite straightforward, however the application required Modular Automation to build-in some clever features to satisfy the product design.

One cell assembles the left-hand seat slide, the other, the right hand. But to avoid holding up production should one cell be interrupted, Modular Automation have designed both cells so that they can be programmed to assemble either side, as required.

An operator loads four components (slide plate, latch, lever and securing plate) on to a Linkline conveyor which presents the parts to the robot and provides a buffer.

The robot then picks up the four loose parts and locates them accurately in a 100 tonne hydraulic press for securing with a mechanical lock technique. An automatic emergency clutch is incorporated into the robot arm which stops the machine if it hits an obstruction. Although this is unlikely to occur during production, the facility avoids damage to the robot or any part of the machine during set-up when exact co-ordinates are being established.

A second gripper on the robot arm then removes the assembled unit from the press and presents it to a spot welder which performs seven welds using two guns (50KVA each), one fixed and one variable. The welders are water cooled to avoid overheating and are controlled direct from the robot, forming a "seventh" axis, rather than from a separate controller. 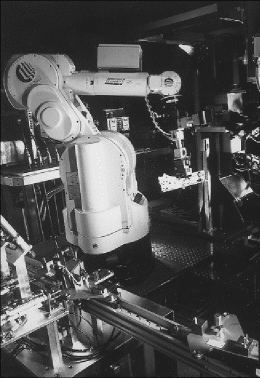 The Modular Automation machine built for Dunlop Cox. After two years service it is recognised as amomg the most reliable in the factory

For final assembly the robot places the unit on a walking beam mechanism where the seat belt anchorage nut is welded into place and torque tested. Again, the machine distinguishes between units for left and right-hand seats, placing the locking nut on alternate assemblies only.

The machine has interface controls, front and back, for easy operator access, and a walk-through facility for use during setup. Both cells are operated by a single operator.