Is your robot really friendly?

Is your robot really friendly?

The first industrial robot, the Unimate, went to work in a General Motors plant in 1961. It was big, hydraulically powered and rather simple minded. Simple, yes, but quite friendly. Programming was instinctive. I could jokingly claim, "It is so easy to program that even our directors can do it". The concept was "record-playback". There was a right-left switch mounted on each axis. One just pushed the axes to desired positions and clicked a hand held record button. When all steps were recorded, the entire program was ready to be played back. After adding a few interlocks to the program, the Unimate went to work.

Today industrial robots are much more sophisticated and they are capable of much more demanding tasks. Software engineers have kept pace with computer hardware advances and robot application engineering has become a full-fledged specialty discipline. Programming is no longer instinctive.

In manufacturing it is proper to look at robotics as a subset of automation. Industry is generally comfortable with system thinking done by experts, be the talent in-house or vendor supplied.

A way of looking at robotics in service might be to consider a robot to be a subset of Homo sapiens. That, after all, is what science fiction writers like Isaac Asimov had always envisioned. Ideally a lay human being should be able to deal with a service robot in the same manner as he or she would deal with an inherently subservient fellow human being. The man-machine interface of choice then becomes a natural language.

Voice recognition is, of course, not enough. Right now, using Dragon Dictate or one of its competitors anyone can speak to a PC to have speech documented. But understanding speech is only part of being friendly. The robot should also act upon verbal command and even report on the fruits of its labor.

Not that we can aspire to a humanoid of the Stepford Wives ilk. Well short of that, it is feasible with current technology to develop a robot caregiver for elderly and infirm folks. Such a robot would be mobile (wheels have it all over legs). The robot would find its way to any destination in the home-bound person's living quarters. On station this household robot would use visual scene analysis, hand-eye coordination, tactility and a modicum of artificial intelligence to provide caring service. 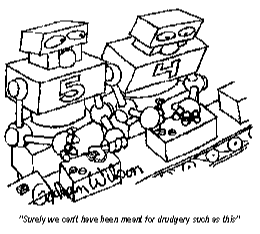 Through fetching and carrying, cooking, cleaning, offering an arm, monitoring health and conversing casually the robot caregiver would greatly extend independent living for mobility impaired "employers". And, the cost of such 24 hour per day labor would be far less than that provided by institutional caregivers. The technology was outlined in a previous Viewpoint and a projection that the robotic caregiver could be offered at a lease rate of $500 a month can be vigorously defended.

Personal service demands friendly robots or the service robot market just will not develop. Once user-friendly becomes a feature of service robotics, then the industrial community will demand as much. Foremen, even workers on the factory floor, would be able to train and retrain their robot colleagues without waiting for programming specialists.

Current robot languages would be embedded hierarchically in the high level command set that relies on natural language and sensory awareness.

The ideal robot wherever it works will be "smart enough to do the job and dumb enough not to mind", just as Capek imagined in R.U.R. when he coined the word, "robot".