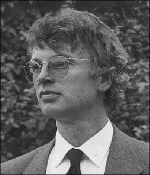 This is our 25th anniversary special issue, timed as it is to coincide with the 29th ISR and its fortuitous visit to the UK.

Our theme "Man/machine interfaces" has been carefully chosen but we look beyond the normal remit of "Windows style" interface discussions. Instead we head straight for the psychologist couch and address the premiss.

"Robots will only gain widespread acceptance and application if people like using them".

In the world there are roughly 5,800 million people, 400 million motor cars, and half a million robots. So not only has the impact of robots on most people's everyday lives been rather minimal (except perhaps that they helped make the cars) but there is also considerable room for expansion. I consider that the car/robot comparison is quite useful particularly with regard to service robots. Both are essentially luxury items, but more of a necessity for certain users, and given comparable scales of manufacture could be produced for the same amount of money: US$10,000 for a basic version, rising to US$100,000 for a robot with go faster stripes and a diploma in cordon bleu cookery.

So why have cars been so widely adopted? I consider there are three principle reasons and these are ­ steering wheel, accelerator, brake. A car is user friendly, most people can learn to drive within a few hours and the immediate benefits are great. Of course when you get to the end of your drive and hit grid-lock the benefits may seem somewhat more tenuous. But still we love them, they are our essential luxuries.

There was a quotation in our UK The Engineer weekly newspaper by Professor Roland Clift of the University of Surrey, "Computers have taken over much of the work... So a lot of engineering has become more routine ­ some would even say boring".

At first you might think surely this cannot be true, but soon realise that it is even though it flies in the face of computer sales banter.

Forgive me if I am wrong but I thought that the whole idea of computers was that they should take on the routine tedious work and free us from drudgery so our minds are free to traverse a higher plain? Cost savings are another major computer sales ploy but how many times have you asked for something that used to be freely available only to be told "we cannot afford to do that any more ­ not since we automated".

A motor car is our slave ­ we dictate where we want to go and it follows our instructions without question. Is that true of most computer applications? It should be but more often than not we end up being slave to the machine, having to enter data in a certain way or follow some prescribed sequence of instructions.

Perhaps computers are really our slaves but we are still at the stage of training them how to work for us. When the training is over we will regain mastership but until that time we will continue to be driven to distraction by their stubborn stupidity. At their current state of development computers have taken away a lot of the skill and satisfaction that we used to obtain from performing our tasks and have yet to replace these losses with something better.

The original unimates of Joe Engelberger's viewpoint were true slaves and much like our automotive analogy they did what they were told and teaching them was intuitive and natural.

Make them easy to use, have recognisable benefits, keep them affordable and sales are bound to follow ­ obvious? Perhaps ­ true? Probably not, at least not yet.

With current levels of software development I consider that a lot more work is needed before personal robots are ready for us, but are we really ready for them? For people with physical disabilities I am sure that the answer is a resounding Yes. Automation can help give them back what nature and misadventure has taken away. But what about the rest of us that are more fortunate?

I consider that modern society is in danger of forgetting that we are tribal animals, we need personal communication . If we try to replace this with machine dialogue I think we will run into serious psychological difficulties. Automobiles are popular because they allow us to travel easily to meet other people. They support the need for human contact rather than replace it. If we can recognise this and design our automation technology accordingly then the future of man and machine will be greatly enhanced.