Although network operators would undoubtedly prefer it to be otherwise, they normally have to compete for whatever stakes come onto the market, and as a result their bids are not always successful nor do they necessarily acquire majority shareholdings. Control is not a direct function of stake size, so it can sometimes be exercised via a minority, but it is fair to say that exercising control via a minority stake is likely to be a periodically fraught process.

Over the past two decades the largest mobile operators have unsurprisingly brought together something of a rag-bag of assets even if some element of geographical specialisation can be discerned. In respect of the minority holdings, questions have inevitably been raised by shareholders as to whether it is sensible to tie up capital in networks where control over such matters as dividend policy lies elsewhere, and in recent times the pressure upon operators to rationalise their holdings in a variety of ways, particularly including the disposal of minority stakes, has come to the fore given the difficulties of raising finance for investment in the open market at acceptable rates of interest. One operator that has been under such pressure for a relatively long time is Vodafone, and hence the analysis that follows uses Vodafone for illustrative purposes.

Table I contains the details of Vodafone’s directly-held network assets as of the end of 2009. It provides data on:

The notes contain information on the indirectly-held assets. All told, as of 31 December 2009, Vodafone had just over one billion gross subscribers and roughly 320 million proportionate subscribers (some numbers are disputed). What is immediately striking is that most of its directly-held assets take the form of majority stakes. The exceptions are:

Of these minorities, only three can still be said to matter in terms of money invested and subscribers, namely France, Poland and the USA, since the China Mobile stake was sold on the open market in early September 2010 for £4.3 billion (of which 70 per cent is to be returned to shareholders). Given the lack of control, the fact that Vodafone doubled its initial investment can be viewed as a satisfactory outcome and hence one can accept at face value that the sale was voluntary rather than in response to shareholder pressure. 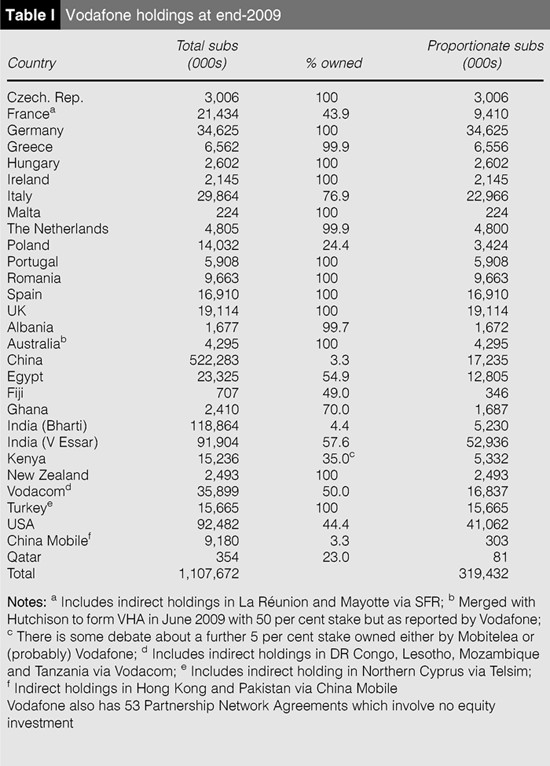 Table I Vodafone holdings at end-2009

The situation in France is more complicated. Vivendi originally acquired its controlling stake in SFR via the purchase of British Telecom’s stake in Cégétel which in turn controlled SFR. At the time, Vodafone allowed itself to be out-bid but, when Vivendi got into difficulties in 2003, it looked like Vodafone would acquire Vivendi and then sell off all of its assets bar SFR. In practice, Vivendi retained its independence and built up a modest mobile empire with two major network assets in France and Morocco. If it sold SFR there would be little or no point in it remaining in the mobile industry, so it has rejected Vodafone’s various attempts to acquire the SFR stake. The biggest problem for Vodafone is that Vivendi has first right of refusal on its minority stake, and in any event there would be no other obvious bidders meaning that the stake would effectively be valued in a buyer’s market.

Many of the same issues pertain in the USA where Verizon Communications has, since 2005, used its majority control over the profits of Verizon Wireless to pay down debt rather than distribute dividends. This has understandably irked Vodafone shareholders who would be able to make a significant capital gain if the US assets were to be sold but, here again, there is only one credible buyer with an incentive to offer a rock-bottom price. As for Poland, the position is, in principle straightforward in that the other shareholders in Polkomtel want to sell and Vodafone would be able to offer its stake at the same time. Unfortunately, in September 2010, the other shareholders proved unable to agree on a communal disposal and there is no buyer for Vodafone’s stake in isolation. However, there are signs that the various shareholders will shortly get their act together as potential buyers are circling.

It is worthy of note that if, in practice, the four assets discussed above had been sold before the end of 2010, Vodafone’s proportionate subscriber numbers would have fallen by roughly 25 per cent compared to end-2009, which would accordingly have constituted a fairly radical restructuring of the company. But there would have been a huge inflow of cash and most market analysts would probably have taken a positive view of the new structure, especially as it would have made Vodafone more geographically concentrated.

But therein lies the rub. At the AGM in May 2010, CEO Vittorio Collao announced that the company would be focused on developing its businesses in Europe, sub-Saharan Africa and India. This would to some extent justify retention of the minorities in India and Kenya and explain current negotiations to sell the majority stake in Egypt – it is alleged that the stakes in the Australian joint venture (with Hutchison) and New Zealand are also open to offers. However, it would not explain the participation in the second licensee in Qatar nor the strong rumours circulating in August 2010 that Vodafone was interested in buying an unspecified stake in TIM Brazil. Nor would it entirely explain the decision to return most of the proceeds of the China Mobile stake sale to shareholders given that this money would not be available for future investment.

But the prevailing view among shareholders – and it has long been reflected in the sluggish share price – is that Vodafone has in the past over-paid for assets of dubious quality (the misadventure in Japan is a good example) and is being given the run-around in France and the USA. However, there is the prospect of a renewed dividend stream from Verizon Wireless in 2012 so it would be surprising if there were to be any developments in the short term. Nevertheless, the fact that, as from 1 October, Vodafone intends to adopt a new organizational structure, involving only two units (reduced from three) covering Western Europe, Eastern Europe and Turkey; and Africa, Middle East and Asia-Pacific, does leave Verizon Wireless in something of a limbo (although it offers a rationalization for the stake in Qatar). As it happens, not only Verizon Wireless but Polkomtel, Bharti and SFR are being dealt with outside the new structure.

Vodafone is (as of mid-September 2010) worth £85 billion. Five years ago it was worth twice as much and in January 2001 it was worth £230 billion, so its massive expansion over the past decade has unquestionably resulted in equally massive value destruction. However, it is difficult to understand why the disposal of minorities is going to act as an agent for transformation of the company given at the very least that: disposals will take time; the price is likely to be poor in a buyer’s market; and emerging markets such as India where Vodafone is investing heavily are becoming increasingly competitive by the day and returns there are likely to be depressed for some time.

It is of interest that no other major operators are rushing to follow Vodafone’s example – some are selling minorities but not ostensibly because the assets lack control, although unlike Vodafone most seem better placed to improve their share prices. It is also of interest that Vodafone’s strategy should finally put to rest the false claim that there can be such an entity as a global mobile operator and hence the most geographically compact operators may find it easier to justify holding on to minorities in their respective shere of operations.

Peter CurwenVisiting Professor of Telecommunications at the University of Strathclyde, Glasgow, UK