The battle for the Latin American mobile space

The battle for the Latin American mobile space

It was only a short while ago, in March 2004, that Telefónica tabled a bid for the Latin American assets of BellSouth at a cost of $4.5 billion in cash plus $1.5 billion of inherited debt. Owing to the pace at which events occur in the TMT sector, this already seems like old history yet the takeover, like most others, is taking a great many months to wend its way through the regulatory process, which in this case involves a significant number of independent jurisdictions. As ever, the data reported in most of the media and on most Web sites have been consistently inaccurate, so the purpose of this Rearview is to disentangle what is happening.

BellSouth is not unusual in sinking back into its domestic market. During 2003, for example, Verizon Communications sold its stakes in EuroTel in the Czech Republic, Telecom Asia in Thailand and CTI Móvil in Argentina, and in June 2004 put its stake in Italy’s Vodafone up for sale. Meanwhile, SBC Communications sold its stake in Belgacom (majority owner of Proximus) in March 2004 and followed up by offering 31.1 per cent of Denmark’s TDC and 4.5 per cent of Telkom of South Africa in June. However, BellSouth did have a particular need for cash at the time, as did SBC, namely their joint successful bid (acting as Cingular Wireless) to acquire AT&T Wireless. BellSouth’s withdrawal from Latin America was, nevertheless, a touch ironic, since it had entered during the 1980s when the prevailing opinion was that it was a part of the world best shunned because of its dubious economic performance, and it was now withdrawing when Latin American mobile markets were growing very rapidly.

At the end of 2003, BellSouth was a major player in the Latin American mobile market, ranking third behind América Móvil, which had been spun off from Mexico’s Telmex and which remained under the tight control of Carlos Slim, and Telefónica Móviles, as shown in Tables I and II. The precise status of the latter company is slightly problematic in relation to Latin America since it must be borne in mind that Telefónica and Telefónica Móviles (TEM) are not identical; the parent owns only 92.5 per cent of its mobile subsidiary. Furthermore, the assets are not held consistently by either company, as the footnotes to Table I demonstrate. Nevertheless, they can be treated as synonymous for the purposes of this exposition. In fourth place, superficially a long way behind, was Telecom Italia Mobile (TIM) although here again it should be borne in mind that it has recently increased its stake in Venezuela and that its parent independently has several stakes in Latin America. Hence, in reality, the Telecom Italia Group was on a par with BellSouth as of June 2004. The only other operator to have significant multiple stakes in Latin America is Millicom International, which has five, but these only produced 1.73 million proportionate subscribers (total subscribers multiplied by ownership stakes) in December 2003, and need not concern us any further. 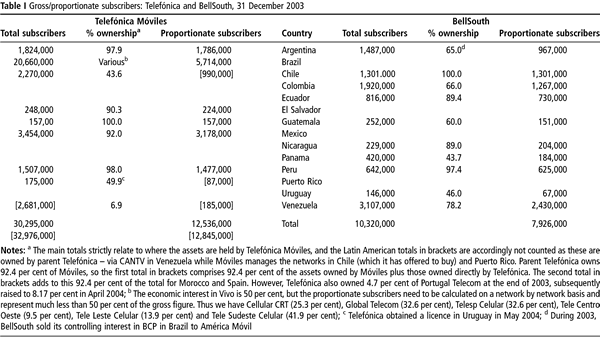 The tendency for media reports to cite gross subscriber numbers is another reason why a completely misleading impression has been given of what is happening. Such numbers tell one almost nothing useful: The only significant issue is who is getting money from whom, and to determine that one must have recourse to proportionate subscriber numbers. These demonstrate that at the end of 2003, América Móvil had roughly 40 million such subscribers, while TEM had a mere 12.5 million. Meanwhile, BellSouth had a further 8 million. Hence, ignoring the irrelevant point that joining these operators together would make them in gross subscriber terms as large as América Móvil, we note that the reality is that the merger will still leave the latter twice as large as the former in economic terms. Meanwhile, TIM will be left trailing a long way back in third place. On the other hand, América Móvil had only 16 million proportionate subscribers in the seven Latin American markets in which it operated outside Mexico at the end of 2003, almost exactly the number applicable to a post-merger TEM (also excluding Mexico) although the latter would be operating in 13 countries.

In fact, TEM has an even bigger struggle on its hands than the simple numbers indicate. In the first place, it must achieve regulatory permission in every single country where it is acquiring assets, and there is no guarantee that all will be accommodating. Certainly, where there are multiple networks, there may be a need to sell some assets, possibly to América Móvil since it is the obvious buyer. Prices in the event of forced sales are likely to be very poor, and badly affect the retrospective return on investment (ROI) of the companies concerned. Second, there is a branding problem given that BellSouth has tended to co-brand, producing the likes of Móvicom BellSouth in Argentina. Rebranding all the networks to the TEM brand will not only be expensive, but also could lead to churn among previously loyal BellSouth subscribers. Third, TEM is primarily a mass-market operator, whereas BellSouth has targeted high-ARPU subscribers. Fourth, TEM is already committed to the use of both GSM and CDMA in different countries. This is less than fully efficient, but BellSouth is a CDMA-only operator so the balance between TEM’s use of technologies will be disturbed. In particular, its tactic of extolling the virtues of GSM where appropriate is going to prove problematic. Fifth, where networks can potentially be amalgamated, the obvious source of economies, namely redundancies, is likely to be heavily resisted by both trade unions and, indeed, governments. As for the need to match up IT systems, the less said the better.

In conclusion, therefore, this proposed acquisition demonstrates yet again that little is what it seems at first sight in the TMT sector. Despite what has been widely claimed in the media, the battle for the Latin American mobile space is a very complicated matter, and its outcome remains for now very difficult to predict.