In recent years the number of engine components coated with diamond like carbon (DLC) coatings has increased significantly. With their unique combination of hardness and low coefficient of friction, DLC coatings can prevent different types of engine failure. Especially, in the diesel injection technology, these coatings have proven their value protecting parts submitted to increasing pressures and poor lubrication. However, the penetration and success of these coatings can be even greater if additional effort is spent on optimizing the total tribological system that is the substrate surface, mating surface and fluid lubricant.

More than just the coating

It is very important to take into account the total tribological system. As shown in Figure 1, more than just the coating is involved in determining the ultimate success of the system.

Coatings have different challenges to face

DLC coatings are mainly applied to increase the life time or improve the performance of a component. Although wear and friction are interlinked, we can distinguish different wear mechanisms that potentially call for different coating solutions.

A first wear mechanism is abrasive wear. This type of wear is characterized by the removal of parts from the surface of the worn-out component. To solve this problem, the wear resistance of the surface is increased, basically by increasing the superficial hardness with a coating. Given the typical hardness of >20 GPa of DLC coatings; these often overcome the abrasive wear, even for components that have to last the full life cycle of an engine. When necessary, the intrinsic wear resistance of a coating can be improved by increasing its hardness and toughness. As shown in Table I, different wear rates can be obtained. 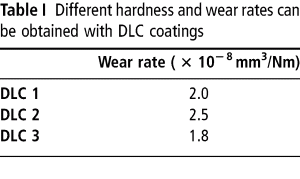 A very important element to monitor when coating components are employed in order to increase wear resistance, is their effect on the counterpart surface. Figure 2 clearly shows the potential danger of certain coatings. When the roughness of the deposited coatings is too high, it will wear out the counterpart, thus not solving the wear problem but merely moving it to the counterpart.

A second common wear mechanism is galling, typically characterized by the transfer of material between the two parts in the tribological system. Different properties of the DLC coating provide a solution for this. First, the DLC coating is an amorphous carbon-based film that acts as a barrier, and second, its low friction properties prevent the cold-welding phenomena.

For both wear mechanisms it is important to consider the full tribological system. In the case of abrasive wear the substrate material should be looked at first. Hard coatings like DLC coatings need to be supported by a sufficient hard substrate to be able to improve the life time of the coated component. The minimum hardness is depending on the contact stresses applied on the surface and therefore also on the contact zone. Hardness requirements will increase when coatings are applied in systems with high pressures or when the pressures are concentrated in a point or line contact. It is not uncommon to have a substrate hardness of 56 HRC or higher when DLC coatings are applied to solve abrasive wear problems.

When solving a galling type of wear, the substrate hardness is less crucial for the overall performance but it is still necessary to look into the substrate because the surface roughness will have an impact on the overall result. Additionally, a different choice of substrate material might be possible given the fact that a coating will be applied, allowing to choose cheaper or easier machine materials. In galling type wear tribological systems, the counterpart also needs some attention. As with the coated parts, the material chosen might be changed leading to cost saving on material or machining.

DLC coatings have a thickness of a few microns. This is one of the reasons why the properties of the surface upon which the coating is deposited are very important. To describe of the surface the most common values used are Rz and Ra.

As shown in Figure 3, having a high Rz value is undesired as, during operation, the coating will gradually wear out at the highest points, leading to a smoother surface but one which contains non-coated areas. These areas are potential spots for occurrence of adhesive wear which can lead to premature failure of the total tribological system.

The limit for Rz also depends on the application and the hertizian pressures involved in a particular system but typical values are situated between 0.8 and 1.0 μm.

Additionally, rough surfaces are not suited for thin coatings as the adhesion of the coating will worsen as the roughness increases. From different tests performed and based on long-term experience of coating race engine components, we can state that as a general rule, the smoother the surface prior to coating, the better the overall result will be. An example of this correlation is shown in Figure 4. Friction measurements using a ball-on-disc set-up were performed on two different samples. The coating applied is exactly the same for both samples; the only difference is the surface roughness (Ra) before coating. With improved surface roughness, the friction behavior of the coated system is improved. These results have been confirmed at different temperatures and show clearly the importance of a good surface finish on the performance of the total tribological system.

For high volume and cost-sensitive applications such as high volume automotive components, the optimal balance between the added cost of improving the surface roughness and the improved performance to be gained, has to be found.

The difficulty in defining the proper roughness specifications is shown in Figure 5. The roughness can be measured in the longitudinal and in the transversal direction. The values for Ra and Rz are similar for both measurements: Ra=0.08 μm and Rz=0.5 μm. Although the values are the correct ones to accommodate a coating, it is clear from the different profiles that the coating performance can be influenced by the direction of the movement/contact.

Additionally it also shows the limits of a specification that only comprises the Rz and Ra values of a surface. Therefore, values that indicate the bearing value of a surface are gaining importance in defining the surface conditions prior to coating. The Rsk value can often be used to compare surfaces that, like in Figure 5, have similar Ra and Rz values. In this example, the Rsk value is negative in the longitudinal direction and positive in the transversal direction. Negative values are preferred because during operation the bearing surface will improve without the risk of running trough the coating.

In search of the best compromise

DLC coatings have proven their potential benefits through the current use in numerous racing components. In the field of high volume automotive engine components, DLC coatings are proving their benefit in an increasing number of valve-train, piston assembly and injection components. But to accelerate the penetration of such coating in these applications, we continually have to examine the full tribological system in order to come up with the optimal cost/benefit ratio.

Are we using the right substrate material and is the heat treatment optimal, given that a coating will be applied? What are the minimum roughness requirements to benefit from coatings for specific applications? Can the coating be tuned to increase the performance/cost ratio?

Laboratory test setups can certainly be helpful to find the right combination, as the experience and know-how gained from racing applications often illustrate. But most progress is made when all parties involved have a close working relationship and components can be tested on test rigs where all elements of the tribological system are present.