Prematec Corporation is a manufacturer of large airframe components for the world's commercial and military aircrafts – including the Airbus A320, A330, and A340 and the Boeing 777 and C17 (Plate 1). 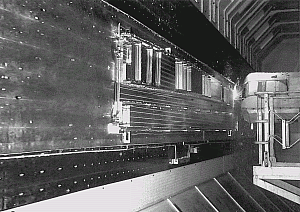 The main aerospace components produced at the company's plant at Llantrisant in Mid Glamorgan, UK, are wing spars and wing ribs. Larger parts are manufactured from aluminium and some smaller parts from titanium. The machine shop employs 50 staff and is equipped with ten high-speed, five-axis CNC machines, the largest with a sump capacity of 36,000l.

Prematec manages its own coolant, and whilst the company had no machining problems, operators were experiencing “misting” with the fluid being used, which affected the atmosphere in the workshop. They were also experiencing bacterial problems and, although a lot of biocide was being added to the fluid, it was still creating bad odours. Neither problem was very pleasant for the operators.

It was at this point that Prematec decided to review the coolant management function. As Director of Engineering, Gerry Broadbear explains: “We wanted a professionally managed coolant system in the factory so that we could forget about it.”

The relationship with Castrol began early in 2003 when Gerry Broadbear looked at four companies, which were evaluated on their product, price and professionalism. He says: “Castrol stood out because they were very proactive and suggested things we could do to improve our manufacturing performance.”

Following the award of the contract, a team from Castrol began a series of training courses for Prematec's operators, in order to explain the important contribution that coolants make in areas such as component quality, machine productivity and health and safety. The team also assisted with the cleaning and coolant change for the three largest machines and recommended a number of procedures for monitoring and handling coolants.

Prematec currently carries out weekly fluid checks, taking samples from the three key machines and sending them to Castrol for analysis. Castrol responds with reports on the condition of the coolants and recommendations to keep it in optimum condition.

Castrol recommended Hysol Excel cutting fluid for machining both aluminium and titanium and it is currently used throughout the factory. The switch to Hysol Excel also cleared up the health and safety issues that Prematec had with its previous fluid.

Gerry Broadbear says: “Both problems have disappeared since we started using Hysol Excel and we have not needed to add biocide since we changed coolants eight months ago.”

He adds that Prematec is very pleased with the professional service provided by Castrol and that the relationship has developed well. Prematec operators still manage the coolant themselves – monitoring, topping up levels and adjusting concentrations – and a Castrol engineer visits every month to run coolant checks and ensure that the schedules are being properly maintained.

Commenting for Castrol, Carl Sault says: “Prematec generates huge amounts of swarf, so we also installed equipment to filter reclaimed coolant from their own swarf compactor. The coolant is now fed back into the sumps and we estimate that recycling has reduced consumption by 60 percent. This, together with the saving on biocides, has cut Prematec's annual costs by 50 percent from 72,000 to 36,000.”

Summing up the benefits for Prematec, Gerry Broadbear concludes: “Castrol's services and training have allowed us to operate a Total Fluid Management programme without outsourcing.”