The findings of a recent field trial by Gregory Distribution in partnership with Shell have proven to be potentially very profitable. The trials, executed to a high scientific standard, showed fuel savings of up to 6 per cent in vehicles which used Shell's fuel economy package of Shell Pura Diesel and synthetic engine and gear oils.

Gregory Distribution runs a fleet of more than 400 vehicles of various sizes and makes (see Plate 4), including Daf, Mercedes-Benz and Scania, delivering a variety of products for blue-chip contracts from the South West of England. Gregory's chose to embark upon the field trials with Shell to see if, by using Shell's advanced fuel and lubricant package, they could reduce the fuel bill for their operation - increasingly important in today's climate of escalating diesel prices. 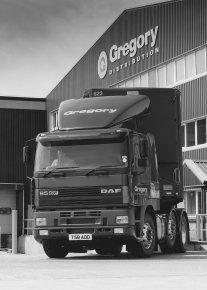 The trials were managed by an experienced team of field trial experts from Shell Global Solutions, based at the Shell Thornton Research Centre in Chester, and consisted of a statistically robust, formal trial structure which has been tried and tested in similar studies world-wide.

Gregory's farm milk collection depot in Crediton, near Exeter, was chosen for the trials. Twelve vehicles were involved, comprising six pairs of trucks that were carefully matched in terms of make, age and vehicle operation - a standard procedure in scientific testing which minimises the effects of variables, including any seasonal variations.

The vehicles were chosen to be representative of the fleet used at the depot, and included four pairs of N- and P-registered farm milk collection vehicles (rigid tankers), two pairs of which were Scanias and two pairs Mercedes. The remaining two pairs involved in the tests were long distance R-registered Scania tractor units. All of the vehicles were equipped with VEMIS units to monitor driver behaviour.

The trials started at the beginning of August 1999 and were concluded in December 1999. After an initial period of one month data-gathering to establish a baseline for comparison, six of the vehicles were switched to the Shell fuel economy package comprising Shell Pura Diesel, Rimula Ultra synthetic engine oil, and Spirax GSX and ASX synthetic gear and axle oils - whilst their respective matched partners continued to use standard diesel and the standard Shell mineral oil lubricant package. The vehicles were then monitored for three months.

Over this period, the long-distance tractor units covered over 50,000km each, primarily on motorways and A-roads, whereas the milk tankers each travelled around 17,000km, including many small lanes into and out of farms and frequent start-stop and stationary operations.

The results showed fuel savings in both types of vehicles, but the degree of saving was different based on the operation of the vehicles. The long-distance tractors running on Shell Pura diesel and the synthetic lubricants showed a saving of between 1.5 to 2.6 per cent compared to the vehicles using the standard package. More impressively, the milk collection vehicles showed typical improvements in fuel economy of 5 to 6 per cent. However, given the greater mileage done by the long-distance tractors, the financial savings on both types of vehicle operation will be approximately equivalent, resulting in a savings on the overall fuel bill.

These results confirm earlier detailed test work carried out in Shell research laboratories, which suggested that the greatest advantage in fuel economy would be found in urban operations. Tests on Euro I and II vehicles in a simulated urban cycle showed a typical improvement of 7 per cent, whilst vehicles under a simulated motorway cycle showed savings of 3.3 per cent.