Biodegradables 'they cost the earth'

Biodegradables "they cost the earth"

This was an extraordinary lecture from a highly respected engineer who seemed to enjoy teasing his rather sparse audience by making startling claims and confessions. He repeated many of the heresies and fallacies about internal combustion engine lubricants and possible alternatives as if he would have liked to have believed them.

Professor Schofield showed a graph (Figure 1) of Falex friction torque tests results on lemonade and Coca-Cola as lubricants with and without his patented super additive, a hetero-polar chelate made from a renewable source (the chincona shrub) which is soluble both in mineral oil and water. The paper goes into detail into the subject of chelation and the chelate acting to form a multi-molecular protective layer on metallic bearing surfaces. The additive has also been engine tested by Ricardo Consulting Engineers and found effective in mineral oils. 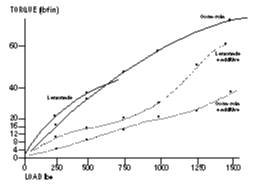 Coca-Cola (described as a source of phosphoric acid and water), together with his chelate additive, 8-hydroxyquinolin, acts as a combined engine lubricant and coolant. The results of Ford Cortina engine tests compared it favourably with a SAE 30 mineral oil. Professor Schofield admitted to using Mobil 1, at £26 for four litres, in his own car. This expensive synthetic lubricant provided superior lubrication and allowed him to greatly extend oil change intervals compared to what would be needed with a "£2.50 supermarket oil", in accordance with the aphorism "only a rich man can afford cheap clothes". He referred to a Slovakian professor friend who had run his Lada for 30 years and 200,000 miles on the same oil by regularly draining, cleaning, "re-spiking" and then replacing the oil. In Professor Schofield's view, motor vehicle filters are too coarse and too small. A filter for a 2-litre should have a maximum pore size of 10 micrometres and a surface area of 2,000 square centimetres. A further advantage of his chelate additive is that it coats wear debris particles, making them bigger, and electrostatically charges the filter thus effectively improving the effectiveness of the filtration.

Jack Schofield started his career of 20 years in industry followed by 30 years in academia as an apprentice turner on five shillings a week. By studying four evenings a week after his day's work he gradually gained academic qualifications which led to his becoming a lecturer at his local polytechnic in Liverpool and eventually a professor. The polytechnic is now known as the Liverpool John Moores University. His awards for services to engineering include an MBE and the Tribology Trust's Silver Medal, its highest national award. Jack Schofield is now a director of three Liverpool companies. Much of the content of his lecture was derived from the student projects he had set over many years, unashamedly using students as free labour to do his research for him. In each department 80 students a year need projects. Thanks to his enthusiasm, tribology proved to be a very popular final year option at Liverpool Poly from when it was first offered in 1968. Many of these projects involved the microbiology of lubricants and coolants, a subject Professor Schofield learned about by sitting in on lectures for two years.

Professor Schofield described at some length LD50 toxicity testing at Liverpool using daphnia (water fleas you can get from a pet shop), earthworms and grass. Apparently you can make worms come to the surface by watering the ground with a solution of Colman's English mustard. LD50 is the amount expressed in mg/kg of body weight of a substance that will kill 50 per cent out of a given statistical number. The LD 50 of common salt is 500 whereas for zinc dialkyldithiophospate oil additive it is greater than 2,000. Tests at his university were less reassuring. The chelate additive is broken down by light and has the same biological activity as common salt. It also acts to control bacterial and fungal growth in lubricants.

Professor Schofield was concerned about the 1.2 mt of grease lost into the environment every year worldwide. He would like to see an environmental award established in the UK along the lines of the Blue Angel, Green Tree and Maple Leaf awards in other countries to reward manufacturers of environmentally acceptable products and practices.

This was a light-hearted lecture with a very serious purpose which held the audience's attention throughout and led to some lively discussion. It was refreshingly different from some of the over pretentious lectures delivered in the past.