"The economic embeddedness of immigrant enterprise in Britain"

which appeared in International Journal of Entrepreneurial Behaviour & Research, Vol. 8 No. 1/2, 2002 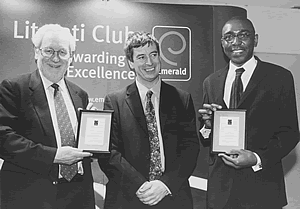 Dr Giles Barrett is Senior Lecturer in Human Geography at Liverpool John Moores University. He was the British partner in the European Union Fourth Framework Targeted Socio-Economic Research network ''Working on the Fringes''. He has completed a number of consultancies for public sector bodies in North West England. His publications include papers in Urban Studies Journal of Ethnic and Migration Studies International Journal of Entrepreneurial Behaviour & Research, and several edited volumes.

David McEvoy is Emeritus Professor of Urban Geography at Liverpool John Moores University. He was Director of the School of Social Science in that university from 1991 to 1998. His research on ethnic minority residence and on ethnic minority business in Britain and Canada stretches over 20 years. It has been funded by the Social Science Research Council (UK), the Economic and Social Research Council (UK), the Commission for Racial Equality (UK) and the Canadian High Commission in London.

Chris McGoldrick is an independent consultant who also works with base line research and survey within Liverpool John Moores University. She is an experienced fund-raiser from EU and UK sources for education and urban regeneration projects involving public and private sector organizations. Her teaching and research interests include black and minority ethnic business, urban and social policy issues, and employability and learning in higher education.