Denoting labor by L, capital by K and output by Y, assume that isoquants are right angled corners and that the production function is given by: 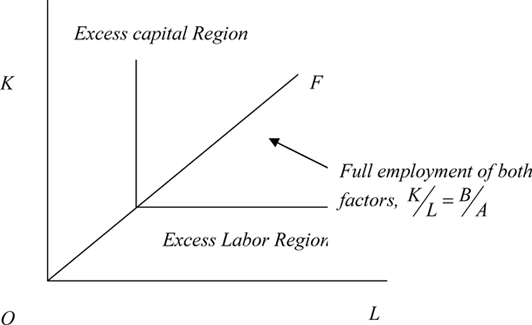 Thus, as opposed to Solow's model of perpetual full employment, we shall be dealing in general with unemployment of either labor or capital in this model.

3. Growth paths of capital and labor

, where s is the constant marginal and average propensity to save out of income. To keep the algebra simple, we shall assume zero depreciation of capital. The output will be BL(t) and AK(t), respectively, above and below the ray OF.

We shall not pursue the factor market structures here and merely concentrate on how the economy behaves if it imitates the Solow economy by investing all savings at each point of time. Our analysis breaks up into two cases, depending on whether the economy lies above or below the ray OF at time point zero.

as in Figure 2. In this region,

. Since n, s and A are exogenous, two sub-cases arise. 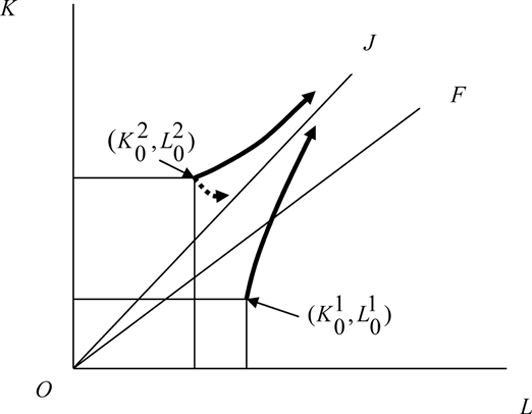 , both K and L rise, but K rises faster than L, since

and the economy is on OF with

. So, K keeps on rising faster than L, with K/L rising above B/A and the economy moves to the capital surplus region, the production function changing to

, it follows that L/K falls so long as

. The growth rate of capital is greater than n, but it declines over time, asymptotically approaching n. Thus, although both K and L increase, the rate of increase of K falls towards n and K/L converges to a number higher than B/A. In the limit,

and K/LsB/n. The unbroken curve starting from

in Figure 2 demonstrates this.

Note that along the ray OJ, both capital and labor are growing at the same rate n. Thus, in the long run, the model behaves the same way as the Solow model, as far as the rate of growth is concerned. Capital, labor and final output rise at the rate n. However, unlike Solow, we do not have full employment of both factors. In particular, all capital is not employed. Actual employment of capital falls on the ray OF. The vertical distance between OJ and OF measures the extent of unemployed capital in long run equilibrium.

Denoting the actual employment of capital by

, we see that both

approaches a positive constant, which is less than unity. The excess supply of capital as a proportion of the growing capital stock converges to a steady positive value.

, so that both K and L rise. In other words, the broken line starting from

cannot represent the behavior of the economy. The correct behavior is captured by the unbroken arrow starting from

in Figure 3. At any point on this curve, the slope is less than unity, since capital grows at a slower rate than labor. The ratio K/L moves through flatter and flatter rays such as OQ and eventually approaches zero. Since the economy continues to remain below the ray OF, there is full employment of capital. 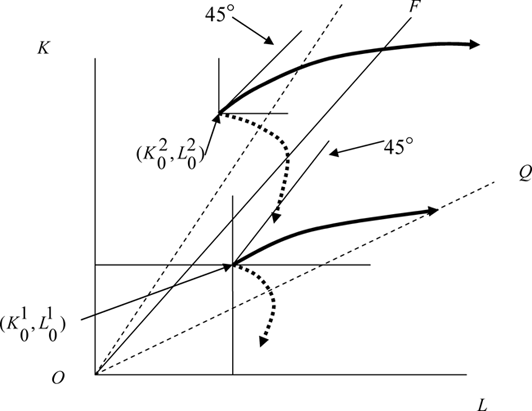 The actual employment of labor,

continue to grow at the same rate, but K/L approaches zero. This means

also approaches zero. The quantity of employed labor as a fraction of the labor force becomes infinitesimally small with time.

Finally, note that output growth is given by

3.2 Initial point in the excess supply of capital zone

There are two cases again.

Following section 3.1, the economy behaves the same way as in the excess-supply-of-labor case if

on OJ, we must have

above OJ. Thus, starting from

. Therefore, L rises faster than K and K/L asymptotes to OJ from above, as shown by the unbroken arrow starting from

. The economy ends up in the long run with properties similar to the excess-supply-of-labor case. Note that both K and L must grow. Hence, the broken line starting from

. So, K keeps on rising slower than L and k(t) falls below B/A. Once this happens, the behavior of

. This implies K/L falls indefinitely, though K and L both keep rising. Once again, the limiting behavior of the economy is the same as in the excess-supply-of-labor case. In particular, Y and K both grow at the rate sA. The economy moves along the unbroken arrow from

and not along the broken arrow.

In all the cases shown, either capital or labor remains unemployed despite the fact that capital employment, labor employment and output grow in the long run at positive rates. Full employment occurs if

falls on OJ. In this case, through a proper choice of s, the economy grows at the rate n from the beginning, without any unemployment.

4. Comparisons with other models

We now try to distinguish these results from other models with which the model of section 3 has often been compared and sometimes even identified.

There are two principal features of the Harrod model, the warranted rate of growth and the natural rate of growth. The former is derived as follows. First, as in Solow's model,

, where S is aggregate savings. Aggregate investment I is supposed to be a function of expected change in output,

, where A is constant. Thus,

As opposed to the warranted rate of growth, the natural rate of growth of the economy, n, is that rate of growth that keeps all resources fully employed at each t. If n=sA, then the expectations fulfilling growth rate is consistent with full employment.

Suppose, however that n>sA. Since

Thus, aggregate investment will exceed aggregate saving, leading to excess demand for output. So, trying to grow faster than the warranted rate will make entrepreneurs conclude they are growing too slowly. This will make them want to grow even faster, giving rise to unabated inflation.

Now, there will be a cut back on output and a continual downward revision of the rate of investment. The entrepreneurs will feel they are growing too fast and invest even less.

In the fixed coefficients model, the system could end up with unemployment, but it will be growing at a constant rate. Harrod's rate of growth will contract under Equation (4). The only similarity between the two systems lies in the full employment cases, which can occur under very special circumstances.

Domar looked at two implications of investment. The first was income generation. The second was novel, the increase in productive capacity. Domar pointed out that capacity may grow at a higher rate than output unless investment grew at a well specified rate.

The change in output demanded, however, must satisfy the condition:

and we require output and capacity to grow at the same rate, then Equations (5) and (6) imply

. However, there is no guarantee that private investors would invest at the rate sσ. If

, then using the fact that aggregate capital stock at t=T is

, we end up again with

. For developing economies, it has an undesirable implication of forced obsolescence of older installed capacity may result.

An endogenous growth model is one for which the long run growth rates of output and capital are not determined by the exogenously given rate of growth of labor. Instead, they are determined by the choice variables of the model, such as the savings rate. Using this definition, notice that the Case sA<n of section 3 was an example of an endogenous growth model. The long run rate of growth of the system equaled sA, and s can be a choice parameter.

We shall now outline very briefly a model (based on Lucas (1988)), which demonstrates how endogenous growth may result with full employment of all factors. We begin with the so-called AK model, which assumes that Y=AK, where A is a constant and K is an aggregate of all factor of production. Using Case sA<n of section 3,

, which is an instance of endogenous growth with full employment.

To convert this to an endogenous growth model with full employment of two factors, we need to give up the restriction on the rate of growth of L (thus eliminating the case sA<n) as well as the technological fixity of K/L. Lucas did this by replacing the aggregate factor of production K of the AK model by human capital H, thereby changing the AK technology to:

where β represents the fraction of human capital employed in human capital accumulation. To this he added a second sector characterized by a neoclassical technology for final goods production function:

where K stands for physical capital.

Now the maximization of a well defined social welfare function incorporating future utilities would lead to a choice of β (via the choice of an optimal saving rate) and this would determine the rate of growth of H endogenously. Once the growth of H is known, Equation (7) would ensure growth of Y and K at the same rate (following Solow's methods).

Students should not fail to notice, however, that at least one sector in the economy must employ a linear technology if endogenous balanced growth is to occur. Romer (1986) deals with endogenous growth without linearity and balanced growth. Dasgupta (2005), section 3.2.8 gives a simplified representation of this complex model.

This short note is clarificatory in nature. It addresses a common misconception that replacing the neoclassical technology in Solow's growth model by the Leontief fixed coefficients production technology gives rise to the growth models of Harrod and Domar. In the process, it also tries to shed light on another common error, viz. the statement that Harrod's growth exercise is essentially the same as Domar's. Finally, it draws the reader's attention to the fixed coefficient feature of an endogenous growth model.