Can the EU Rebuild Failing States? A Review of Europe’s Civilian Capacities

The recently formed European Council on Foreign Relations (ECFR), based in Brussels, has tackled head-on the crisis management that the European Union extends to help failed States find new life. The problem analyzed is an illustration par excellence of sound applications of foresight, in this case what the EU is capable of and how well it attains its objectives, staffing, and provision of training and support to States in trouble – and then rating the results.

The context in which this is achieved is known as ESDP, European Security and Defence Policy – a programme in which the Union is still, very much, feeling its way. The EU has completed about two dozen missions intended to mitigate crisis since 2002, acquiring in the process applicable knowledge for future operations of several types:

After describing the conditions produced by a failed nation (as in Somalia, the Democratic Republic of the Congo, Bosnia-Herzegovina, Moldova, possibly Yemen), the authors stress what needs to be done to assist nations in emerging from the breakdown of governance and societal order: the EU for its part must have access to the appropriate civil or military backgrounds of a variety of experts, be able to count on the services of such experts for missions longer than six months, and be sure that its recruits do their job effectively but diplomatically. 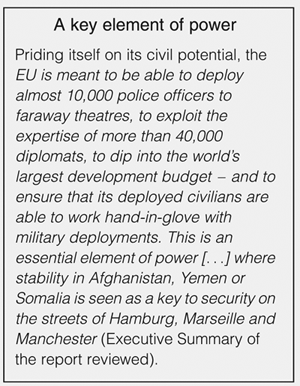 Jean-Marie Guéhenno, a former top official of the UN charged with the management of peacekeeping operations, assesses (in the Foreword) the Korski-Gowan report as “severe” on how the EU performs as a civil power. He believes, however, that “the good news is that no group of countries […] has more civilian capacity potential than the EU”, and that “opinion polls conducted across more than 50 countries find more support for a rise in the EU’s global influence than for any other major power. This is, indeed, an extraordinary vote of confidence, but can Europe live up to it?”. That is the critical question raised in this compact paperback.

The authors, look-ahead specialists in public policy, write fairly critically of the EU’s security strategies and procedures –to the point that they cite much of these as “unactionable fluff”. This is part of the image of the Union’s work that their book should help to correct while avoiding the trap of “afghanistics”: the persistence of some in waging wars without victory.

This ECFR report should be of particular value to country leaders asked to provide human resources and logistics for failed-State missions, and peacekeepers assigned by the United Nations. The next generation of these missions, cautions the report, “are likely to look a lot more like Gaza, Afghanistan and Somalia: fluid, violent, and with a few clear-cut good and bad guys”.

Jacques RichardsonMember of the Editorial Board of foresight