The UK is still the most cost effective business location from which to operate and service commercial office property in Europe, according to The Europroperty/Johnson Controls' Index of European Office Costs. The Index (see Figure 1), which is published every six months, reveals that property operations and office services can be up to 50 per cent more economical to run in the UK than in any other major strategic corporate European location (on a like for like basis). Denmark and Spain are highlighted as two of the most expensive countries in which to run offices.

High taxes for energy and water have made Denmark the most expensive country at 36 per cent above the average. However, if utilities were not to be included, Denmark would be one of the lower cost countries.

At 26 per cent above the average, Spain is the second most expensive country. The most disparate of the eight countries, Spain has the highest costs in communications, reprographics and stationery and the lowest costs in the seven remaining cost areas. 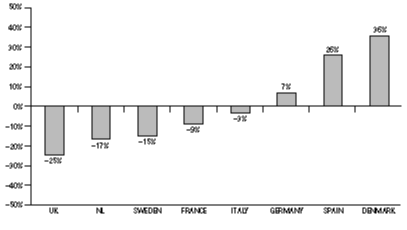 With its highly sophisticated facilities management industry and low labour costs, the UK is still the most cost effective at 25 per cent below the average.

Other highlights include a drop for France from 9 per cent above the average to 9 per cent, below the average. This is partly due to a decrease in communication and reprographics costs. France is the most expensive country in maintenance and one of the cheapest in stationery.

The Index calculates average costs for a typical medium grade office building in each country and compares country performance as a deviation from the base average, which is set at zero. The model used is based on a medium sized, air-conditioned building of 15,000 square metres with 750 employees working between 8 a.m. and 6 p.m. The index is calculated in Euros.

"Accurate information on which to base strategic business decisions has never been more valuable", said Mr Barry Varcoe, Johnson Controls' International Performance Manager, who has been analysing the European facilities market for more than three years. "Now businesses across Europe can clearly understand the underlying cost performance of different locations side by side, as they consider strategic property decisions".

At the heart of The Europroperty/Johnson Controls Index of European Office Costs is the international performance management (IPM) system. This is a unique data warehouse which has been developed by Johnson Controls and contains workspace information on more than 40 million square metres of office and industrial facilities around the world. This enables Johnson Controls to measure and compare the quality, service delivery and cost performance of facilities across the globe so that improvements can be identified and efficiencies made.