Britain's construction industry is in its healthiest state for ten years, and key players in the sector are confident that workload is to grow, says the latest report published in April by the Royal Institution of Chartered Surveyors (RICS). Output has now increased for the eighth successive quarter and construction activity trends look set to remain steady for the coming year.

Workload expectations have survived the Budget unscathed amid a growing feeling that the construction upturn is broad-based enough (by both sector and region) to survive the inevitable drop in spending after the millennium. This is after a period during which optimism had been on the decline as the industry adjusted to the new government's tight spending plans.

The RICS Construction Market Survey looks at the workload of chartered surveyors practising in the building industry. They are among the first to detect new trends in construction because of their early involvement in proposed projects.

Figures for the first quarter of 1998 show that workload has increased across every region of the UK for the first time since early 1989. Chartered surveyors reported activity up by 4.7 per cent in Wales and the South West, 2.2 per cent in Scotland and 2 per cent in Northern Ireland. There was lower growth in the Midlands and East Anglia (1.3 per cent), the South East (0.9 per cent) and the North (0.2 per cent).

With a 39 per cent increase in activity over the year, the private commercial sector is by far the strongest (Figure 1). Industrial property follows with growth of 13.1 per cent. The private housing, public housing and public works sectors are all lagging behind. 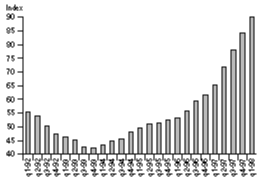 Skills shortages remain serious. Half of all firms taking part in the survey had difficulty finding enough carpenters and plasterers, and more than four-fifths had problems obtaining bricklayers' skills. Today's labour shortages are in part down to the extent of the early 1990s shakeout when construction shed 500,000 workers, many of whom have retired or retrained and represent a permanent loss to the industry.

"We are enjoying a refreshing period of stability in the industry, which should remain for some time to come. Last month's Budget carried no nasty surprises for construction, leaving workload expectations among chartered surveyors virtually unchanged.

"There have been fears that current levels of work will not survive the drying up of millennium projects after 2000, but I believe that, with modest expansion taking place across nearly all sectors and in all parts of the country, the health of the industry is sustainable into the early years of the new century.

"However, let's not forget that even with output at its highest for several years, we are still at only 54 per cent of the 1988 level, which illustrates the severity of the building recession in the early 1990s."