Pricing levels on a £1 million project are some 12 per cent lower than on a £100,000 project, according to the BCIS Study of Pricing Adjustment Factors published recently in the BCIS Surveys of Tender Prices[1]. 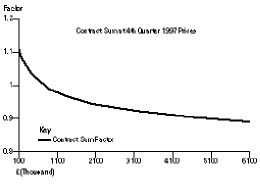 The BCIS study of pricing adjustment factors shows the pricing levels of a range of factors including location, procurement route, number of storeys, size of contract, type of work and building type.

1 The BCIS study of pricing adjustment factors is part of the BCIS Surveys of Tender Prices which also includes an update of the BCIS Tender Price Index, the Contract Percentages Study, the Study of Average £/m2 Prices and Functional Prices for a whole range of building types. Available individually at £65.00, on subscription at £210.00 p.a. for four issues, or as part of the BCIS Bulletin Service, from the Building Cost Information Service, 12 Great George Street, Parliament Square, London SW1P 3AD.