During the Northern Hemisphere Summer of 2010 the International Centre for Anti-consumption Research (ICAR) and New Approaches in Consumer Resistance (NACRE) approached Euromed Management Marseille to host the first anti-consumption and consumer resistance symposium in Europe. Geographically a port in the Mediterranean basin, Marseille is a European city heavily influenced by a melting pot of ideas and practices. It is simultaneously complex, conflicting, and convergent; a perfect place for the topic of our symposium. Indeed, as Thierry Fabre (1998, p. 12) a major Mediterranean thinker wrote:

Markets and exchanges may have always been at the heart of Mediterranean societies, but money has never been our main value. Trading things involves first and foremost trading with other people, and we feel that the economic domain continues to be subordinate to the human one.

This ancient and enduring perspective on trade, economy, and human interaction seems obvious, but has somehow been lost to the majority of business practices in less than two centuries of industrial/commercial expansion and only a few decades of neoliberalism. Thus, one major contribution of topics such as anti-consumption and consumer resistance is to redress this “momentary” slip and force business scholars to reconsider the broader focus of our discipline.

The Marseille symposium was organised in conjunction with this special section in the European Journal of Marketing (EJM), which focuses on the concepts, concerns, conflicts, and convergences prominent within the discursive space on anti-consumption and consumer resistance; its intention is to delineate between the two burgeoning areas. We hope that the combined effort of more than 50 first round submissions, 107 initial authors, 66 valuable reviewers, a two-day symposium, one roundtable at the European Advances in Consumer Research London, two competitive rounds of review, and four grateful Guest Editors will fulfil this objective.

Consumer resistance is a rich and well-defined area. Drawing from Peñaloza’s and Price’s (1993) seminal work, this growing field of research has explored, in various contexts, the reactions displayed by consumers towards companies and their influences and practices. As the term suggests, all acts of consumer resistance must include:

Therefore, the focus of consumer resistance always revolves around the topic of power or, rather, power asymmetry (Foucault, 1975, 1982).

We broadly classify anti-consumption into a three non-exclusive phenomenon: reject, restrict, and reclaim. In processes of rejecting, individuals intentionally and meaningfully exclude particular goods from their consumption cycle, for example, rejecting Nike because of functional, symbolic, or ethical reasons. The idea of restricting incorporates cutting, lowering and limiting consumption when complete anti-consumption is not possible; for example, restricting electricity or water use. Whilst reject is about avoiding the consumption of some goods, and restrict is about the reduction of some goods, reclaim represents an ideological shift regarding the processes of acquisition, use, and dispossession. For example, voluntary simplifiers reclaim their identity via production instead of consumption, when they choose to grow their own vegetables rather than acquire them through conventional markets. Similarly, dumpster divers and ecological artists reclaim “trash” from the process of dispossession, and imbue “waste” with new meaning/value.

In contrast, consumer resistance focuses on consumer/s opposing or escaping a dominant force exerted by certain actors, behaviours, and devices (Roux, 2007). Specifically, as firms and their representatives attempt to influence consumers’ choices and decisions, they exercise power over consumers (Marsden, 2001). However, by resisting such influences, consumers can adversely affect the achievement of company objectives. Consumers have power over firms to the extent that firms depend on their cooperation. Because power is based on dependence, some firms use legitimization as a strategy for remaining favourable (Pfeffer and Salancik, 1978). Firms try to be legitimate through their products (inclusive of all offerings), their practices, and by presenting themselves as worthy partners in the exchange process (Bourgeois and Nizet, 1995). These three facets of legitimization are also the echo chambers in which consumer discontent is amplified. With regards to the first facet, products and other offerings presumed legitimate by the firm, may still be swept aside by consumers’ claims to freely chosen codes and signs, and rejection of mass-marketed meanings. Considering the second facet, legitimate practices, individuals can feel saturated and repelled by the manipulative, if ineffective, advances made by companies (Fournier et al., 1998). Selling tactics are resisted in the name of autonomy and ethics. Complaining behaviour, boycotts, and “culture jamming” are all expressions of dissatisfaction, feelings of harassment and moral sanction applied against hegemonic practices and propaganda. Finally, at the third level of legitimate partnerships, some consumers question if certain companies are acceptable as trading partners and as responsible actors for future generations. Whereas companies urge consumers to trust them and to rely on their business skills, individuals can choose to ignore or avoid them, and instead pursue partnerships with alternative distribution channels such as second-hand markets and consumer-to-consumer exchanges.

So, in some cases, consumer resistance is expressed by acts of anti-consumption, directed against a domineering corporation, leading to boycott behaviour of its products. At other times resistance may also be expressed through certain consumption choices, for instance, opposing the dominant retail channel through the formation of consumer co-opts that fulfil consumption needs (Kates and Belk, 2001). Similarly, not all acts of anti-consumption need involve resistance against a dominant force. For instance, functional voluntary simplifiers perform many acts of anti-consumption that are primarily motivated by a desire to reclaim a more authentic self-identity than to oppose specific actors or situations; here, anti-consumption may still be ideological (Kozinets et al., 2010) however, there may not be a specific target of dominance that the voluntary simplifier actively confronts. Similarly, many studies of undesired self highlight the relationship between anti-consumption and the rejection of the undesired self, once again, in these studies, anti-consumption of certain goods/brands allows a person to negotiate their self-identity project without resisting a well-defined dominant antagonist. 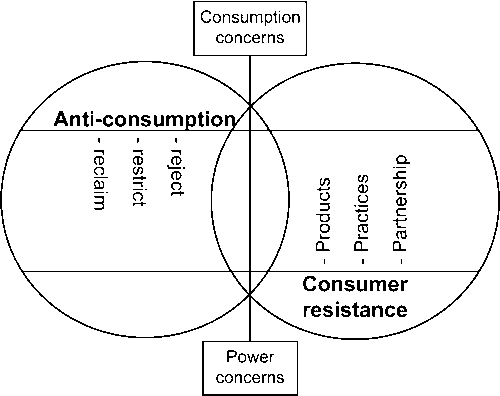 While we believe we have successfully delineated between the two concepts at a theoretical level, the papers show that in practice, the majority of works lay most comfortable within the overlap of anti-consumption and consumer resistance. One study was, and a few others could potentially be, positioned only in the realm of consumer resistance. What then of cases that speak to the concepts of reject, restrict, and reclaim, without opposition towards any antagonist? Do such purely anti-consumption phenomena exist? This editorial is based on a hunch that such cases must exist, but future research could utilise, or challenge, the framework provided here to either position work in, or redefine, this burgeoning area.

Finally, we close by sincerely thanking EJM Chief Editors Nick Lee and Gordon Greenley whom were highly receptive to this idea of a special section on anti-consumption and consumer resistance, and our tremendously helpful reviewers who are listed alphabetically below.

Mike Lee can be contacted at: msw.lee@auckland.ac.nz