The morality of economic man

The morality of economic man

AbstractArgues that modern neo-liberal economic theory is constrained by mechanistic and reductionist assumptions about human behaviour. In particular, it clings to a belief in Homo Oeconomicus (economic man), a somewhat abstract figure motivated by narrow self-interest and competitive instincts. This is at most only half the picture. Human beings have evolved as sociable creatures, with a strong ethical sense, for whom co-operation and security are essential. It is therefore important that economics take greater account of the co-operative and moral aspects of human behaviour, so that the market system can deliver genuine freedom and prosperity, instead of atomisation and nihilism.

Economic behaviour is multifaceted and context-dependent. In the “I & We” paradigm developed by Amitai Etzioni (1988), economic behaviour is co-determined by utility calculations and moral considerations. Two major factors can explain the ethicality of economic behaviour; namely, the moral character of the agents and the relative cost of ethical behaviour. Economic agents are moral beings, but the ethical fabric of the economy determines which face of the moral economic man predominates.

It is a common belief in our age that people are motivated by their own material well-being when taking economic actions. This is the well-known Homo Oeconomicus image that depicts economic agents as rational, self-interest-maximizing beings. However, economic behaviour is much more complex than the Homo Oeconomicus model suggests. People have rather different motivations, which may determine their economic choices (Jolls et al., 2000).

Some interesting experimental results aptly illustrate the above-noted behavioural features (1)-(6). The following famous studies provide strong counter-evidences for the Homo Oeconomicus model. They suggest that people are moral beings in their economic actions.

The Homo Oeconomicus model presupposes that the allocator will propose $9.99 for herself/himself and only $0.01 to the other player, and that the receiver will accept this offer on the grounds that the utility of one penny is greater than zero. But this is not what happens in reality. Offers usually average between $3 and $4. Offers less than $2 are often rejected. Frequently there is a 50-50 division. These results cut across diverse cultures and the level of stakes (Sunstein, 2000).

The Homo Oeconomicus model predicts that people will always defect in a prisoner’s dilemma game situation. Each player may believe that it would pay more if she or he were non-cooperative since the other player is also expected to be non-cooperative.

Robert H. Frank and his colleagues conducted their prisoner’s dilemma experiment with real money several hundred times. The subjects met in groups of three. Each was told that she or he would play the game once only with each of the other two subjects. Confidentiality was maintained so that none of the players would learn how their partners had responded in any play of the game. The rate of co-operation ranged between 40 per cent and 62 per cent (Frank et al., 1993).

To refine their experiement Frank and his colleagues asked subjects whether they would cooperate or defect in a one-shot prisoner’s dilemma game if they knew with certainty that their partner was going to cooperate. The answers for cooperation ranged between 42 and 66 per cent (Frank et al., 1993).

Anthony M. Yezer and his colleagues conducted the so-called “lost-letter” experiment (Yezer et al., 1996). The letter was placed in an unsealed, stamped, plain white envelope, with a single name and address on the front and no return address. Inside were ten one-dollar bills along with a brief hand-written note indicating that the enclosed currency was for repayment of an informal loan.

This experimental evidence indicates that people display respect for the interests of strangers. The returned envelopes also provided some qualitative evidence on student reactions to the lost letters. In two cases, students added messages indicating that they had made extraordinary efforts to locate the addressee, including checking the student directory, the telephone directory and the university registrar (Yezer et al., 1996).

In their pioneering study, Gerald Marwell and Ruth Ames designed an experiment where subjects were given some initial endowment of money that they were to allocate between two accounts, the “public” and the “private”. Money deposited in the subject’s private account was returned to the subject dollar-for-dollar at the end of the experiment. Money deposited in the public account was pooled, multiplied by a factor greater than unity, and finally distributed equally among all subjects (Marwell and Ames, 1981).

The first players sent an average of $12.41 to their partners, who returned an average of 45 per cent of the doubled sum. The existence of a previous acquaintance affected behaviour: both the amount initially sent, and the percentage returned by the second player, rose in proportion to the length of time the players had known each other (Glaeser et al., 2000).

Amitai Etzioni developed a theory that he calls socio-economics. He introduced the so-called “I & We” paradigm that “sees individuals as able to act rationally and on their own, advancing their self or ‘I’, but their ability to do so is deeply affected by how well they are anchored within a sound community and sustained by a firm moral and emotive personal underpinning – a community they perceive as theirs, as ‘We’” (Etzioni, 1988, p. x.)

Etzioni presents a new model of decision making in which people typically choose means largely on the basis of emotions and value judgments, and only secondarily on the basis of logical-empirical considerations.

Individuals are, simultaneously, under the influence of two major sets of factors – their pleasure, and their moral duty (although both reflect socialization) … There are important differences in the extent each of these sets of factors is operative under different historical and societal conditions, and within different personalities under the same conditions (Etzioni, 1988, p. 63).

The relationship between pleasure and morality is that while both affect choice, they also affect one another. However, each factor is only partially shaped by the other; that is, each factor has a considerable measure of autonomy. This co-determination model is shown by Figure 1. 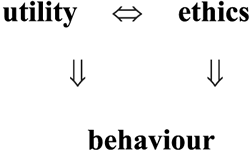 Etzioni states that “people do not seek to maximize their pleasure, but to balance their service of the two major purposes – to advance their well-being and to act morally” (Etzioni, 1988, p. 83).

The ethical fabric of the economy

Economic behaviour is co-determined by utility calculations and moral considerations. The major factors that can help in understanding behaviour can be identified:

Moral character refers to the strength of the moral beliefs and commitments of the agents. In a given situation the relative cost of ethical behaviour is determined by the cost of an ethical option compared against the cost of the unethical option in terms of transaction cost and opportunity loss. 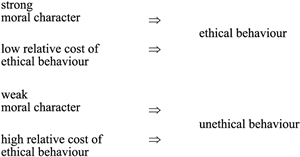 Figure 2 Determinants of the ethicality of behaviour

The level of corruption in European countries is a good illustration. Transparency International produces the corruption ranking of countries year by year. Their ranking for 2003 is shown in Table I. 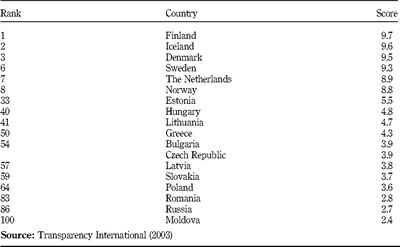 Table I Corruption indices of selected European countries in 2003

Collective belief in the ethical norms, pro-socialness of agents, high cost of transgression as well as transparency and accountability are all major conditions for the proper functioning of the moral economic man.

AcknowledgementsThis article is based on the author’s chapter “The moral economic man” in Zsolnai, L. (Ed.), Ethics in the Economy: Handbook of Business Ethics, Peter Lang, Oxford and Bern, 2002.