The previous Internet editorial coincided with the launch in July of the latest UK government policies and progress reports on e-commerce. This editorial focuses on the policies of G7 and other countries.

Two good sources for links to other countries' government Web sites are available. Europa, the European Unions Web server, has links to all 15 European Union member states and 30 other European countries. Links are to the main governmental sites for each country. The site also has a "useful links" page that provides access to sites for institutions such as the national parliament, the national statistics office, the central bank and the national cultural organisation. The DW Infoserver site provides information with a greater telecommunications and Internet emphasis. It provides links to at least 53 countries' telecommunications information and infrastructure policies.

The key goals for e-commerce for each country are presented in Table I. Further analysis of targets that government's have set for individuals and businesses are shown in Table II. However, it must be noted that these details are obviously susceptible to the value judgements of the author and team members who helped to compile this information for a major international comparative project for the UK Government's e-Envoy Office. 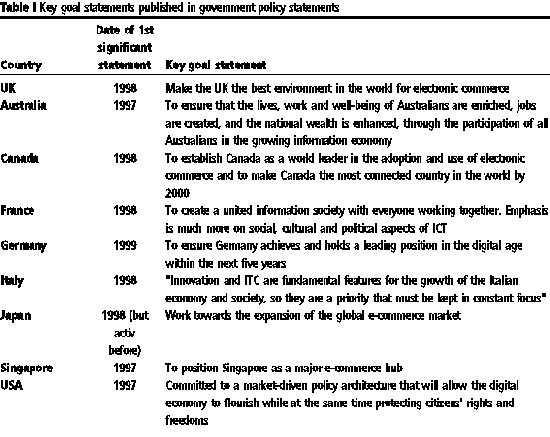 Australia, Singapore and the USA published the first significant government Internet or e-commerce policy statements in 1997, see Table I. Nearly all the others studied followed these three countries in 1998. The only exception was Germany where the first document was published in 1999. Most countries have recognised the impact that the Internet and e-commerce can have on the way they operate. In promoting e-commerce and Internet access several have recognised the catalytic role that government can play in better utilising the Internet.

Nearly all countries emphasise the importance of e-commerce in their policy statements. However, US and Japanese policy documents have far more of a global emphasis, highlighting the need to expand e-commerce throughout the world, rather than just in their domestic market. Indeed, all of the USA's five "basic principles guiding policy" have an international, rather than a domestic, tone.

The divergence in policy emphasis is interesting. Tables I and II show that nearly all countries place a strong emphasis on e-commerce within their policy statements and targets. The only countries that do not seem to emphasise e-commerce fully are Germany and France. Germany sets targets for the connectedness of businesses for e-commerce, but does not stress the need to enhance e-commerce. The French emphasis is much more on social, cultural and political aspects of information and communication technologies in general, rather than the Internet in particular. The relative lack of emphasis on e-commerce could possibly be due to the French Minitel system that enables some e-commerce. 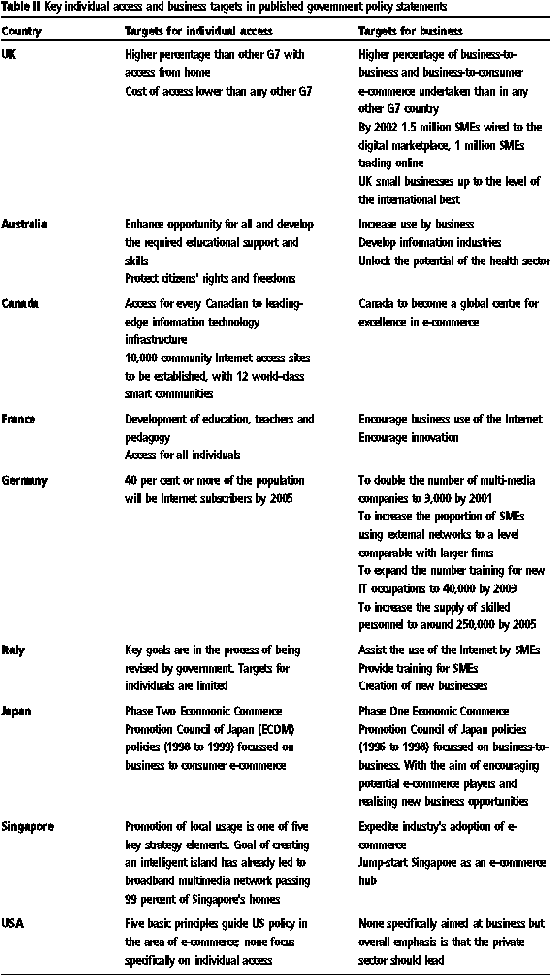 Policies towards access differ between countries. The UK, Australia, Canada and France all place great emphasis on enhancing access for all and they have specific policy goals and initiatives to promote access. Indeed, Canada's goal was to become the most connected country in the world by 2000. But like many objectives, specific measures against which to record the achievement of this goal are not provided.

Table II provides an overview of the individual access and businesses use targets different countries have adopted. Targets have not generally been quantified. However, some nations, such as Canada and Germany, have set specific domestic targets. Only the UK has set targets with an international benchmarking dimension.

Several countries have set themselves the non-quantified goal of becoming a leading nation for e-commerce. For example:

In the UK, Japan and the USA e-commerce issues are administered from the centre of Government, in the Cabinet Office (UK) or within inter-departmental agencies chaired by the Prime Minister (Japan) or Vice President (USA), see Table III. France has decided not to centralise e-commerce administration; instead, all public service departments are involved in PAGSI (Action Plan for France's entry into the Information Society). Six departments and organisations support this group but the champion is the Prime Minister with Cabinet Office involvement. 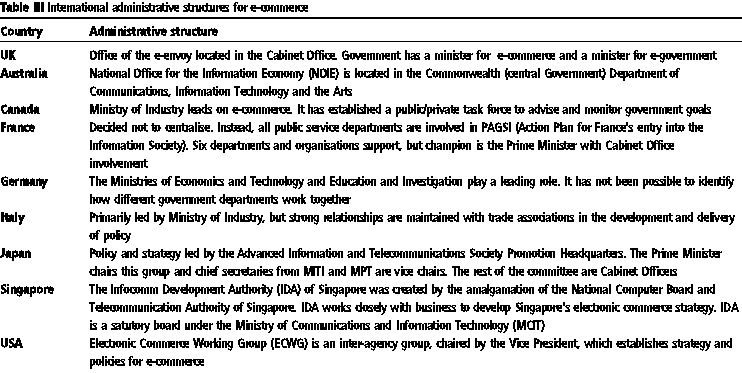 In most other countries, e-commerce issues appear to be administered primarily from Departments of Telecommunications (Australia and Singapore) or Industry (Canada, Germany and Italy).

The degree of rigour with which e-commerce measures are monitored in different countries is influenced by the prevailing government's managerial philosophy. In the UK and USA over the last two decades, government's preferred management strategy has moved towards managerialism with objective setting, targets and performance indicators. As a result the monitoring and collection of data for evaluation have been widely adopted. In other countries there is less emphasis on monitoring and measurement.

It is therefore not surprising that significant differences are apparent between countries in their collection of data. The UK has adopted fairly rigorous methods to collect data about individual access and business use of the Internet and e-commerce. Others such as France, Japan and Italy have not placed as much emphasis on data collection. A number of countries have been awaiting the outcome of OECD discussions defining "e-commerce" before embarking on major domestic studies. OECD produced broad and narrow definitions of e-commerce in discussion documents in April 2000.

Table IV presents is a selective review of Web sites that provide details about international government departments, reports and other sites mentioned in this paper. Dynamic links to these pages can be found at the International Electronic Commerce Research Centre home page: http://www.dmu.ac.uk/ln/ecommerce/ebr10.html 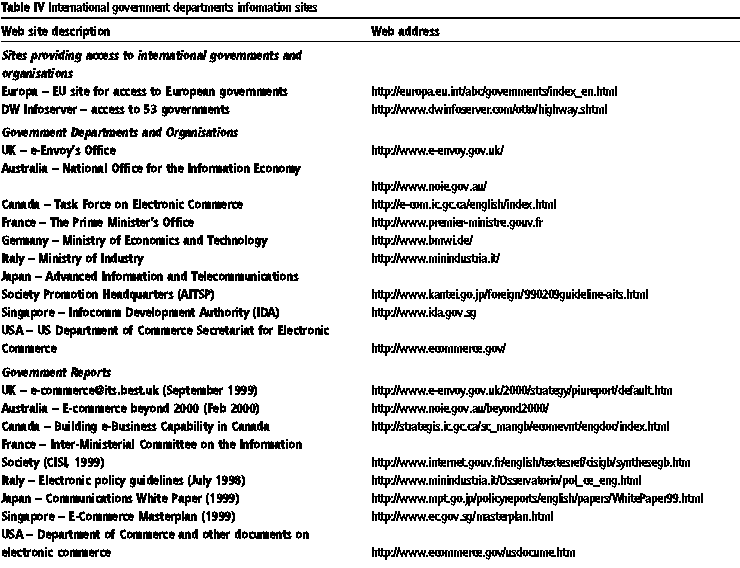