This summer, at about the same time as this edition of the European Business Review is published, the UK government will be producing a follow-up document to 'e-commerce@its.best.uk'. This was the first UK government report to concentrate on the topic of electronic commerce. The document, to be published in summer 2000, will provide a benchmark for e-commerce performance in the UK and outline policies to enhance e-commerce in the UK.

To provide a context for the report, and the media interest it will generate, this editorial will focus on the development of e-commerce policy in the UK.

Government's agenda and broad aims for e-commerce and information and communication technologies (ICT) were first outlined in the December 1998 Competitiveness White Paper. The detailed plans and background work were set out in "Our Competitive Future: Benchmarking the Digital Economy". This document formed part of a broader Government agenda (also published in December 1998) for addressing the challenges of the knowledge driven economy - "Our competitive future: Building the knowledge driven economy".

The Performance and Innovation Unit of the Cabinet Office were commissioned by the Prime Minister to develop e-commerce ideas presented in the Competitiveness White Paper. They produced 'e-commerce@its.best.uk', in September 1999, which recommended a series of further actions for Government to help ensure the UK achieves digital leadership.

The UK Government's primary aim, set out in the 1998 Competitiveness White Paper, is to "make the UK the best environment in the world for e-commerce". 'E-commerce@its.best.uk' provides a strategic framework to achieve this goal. The report's 60 recommendations focus on building sound foundations for e-commerce, improving understanding, increasing access, enhancing trust, promoting government as an exemplar, developing monitoring of e-commerce, and co-ordinating activities for e-commerce within government.

The report also highlights five key indicators for becoming the best environment in the world for e-commerce. These are:

These objectives sit alongside the specific targets for ICT set by the Secretary of State for Trade and Industry, in May 1999. The targets are that by 2002 there should be:

In January 2000 Alex Allan, most recently the British High Commissioner to Australia, took up his post as the Government's first e-Envoy, reporting directly to the Prime Minister. He will also report on a day-to-day basis through Patricia Hewitt and Ian McCartney.

Patricia Hewitt was appointed as Minister for Small Business and e-Commerce at the DTI on 29 July 1999. As the Government's e-Minister she reports directly to the Prime Minister on Information Age issues. Ian McCartney, the Minister for e-Government, has particular responsibility for the delivery of e-Government objectives.

The e-Envoy's Office has a staff of 11 people. Alex Allan is also responsible for the Cabinet Office's Central Information Technology Unit (CITU), the Unit has 23 staff (including administrative and support personnel). The primary role of the CITU, set up in November 1995, is to advise Ministers on the development of strategy for the use of IT by Government. However, in recent months it has also taken on a number of activities related to e-commerce. CITU's current activities include taking forward the Information Age Government agenda of the Modernising Government White Paper including the corporate IT strategy for government and the Channels initiative.

Only time will tell whether government will be able to achieve the objectives it has set. The next Internet editorial will examine how UK government's strategies, operational procedures and objectives compare with those adopted by other G8 countries.

Listed in Table I is a selective review of Web sites that provide details about agents and other sites mentioned in this paper. Dynamic links to these pages can be found at the De Montfort University International Electronic Commerce Research Centre home page: http://www.dmu.ac.uk/ln/ecommerce/ebr9.html 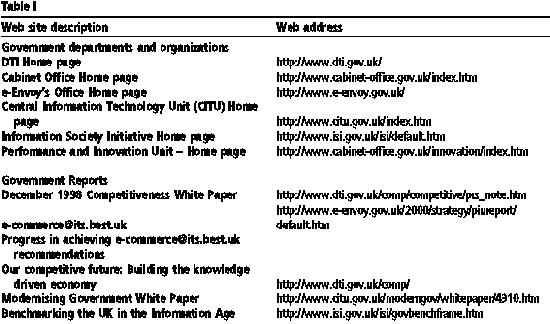