Assessing the impact of contamination in an SMT production environment

Contamination is a major source of defects resulting in lower yields and lost production in today's SMT environment. This paper examines the key sources of contamination, how it can be measured and what can be done to negate its effect.

Generally, SMT production does not take place in a true cleanroom environment but is usually in an enclosed area. This area is generally assumed to be clean however manufacturers still find that there is an unacceptable level of defects and rework.

Carrying out a detailed contamination audit is therefore essential to get to the root of the problem. Particles in the air can come from a variety of sources such as hair, lint from cleaning cloths, fibres from clothing, dust, skin flakes, epoxy dust, solder paste, solder resist and packaging materials. Problems arise when these particulates are present on the substrate during processing.

The first type is a contamination matrix for each department on which all the samples taken in that department are logged, together with their analysis results. Presenting the contamination analysis in this way makes it immediately obvious where housekeeping procedures or manufacturing protocols need to be increased or changed within the department. It also identifies what the major types of contamination are. A sample of this type of matrix is shown in Figure 2. 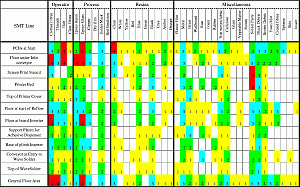 Secondly, there is also a summary contamination matrix for the facility as a whole, where the departments are listed, with their total contamination levels logged. This matrix shows the flow of contamination throughout the plant.

From analysis of these matrices, which can be colour coded to make them easier to read, it is possible to highlight the major areas where contamination poses a high risk to process yields and appropriate action can be taken to reduce the contamination levels.

After each remedial action has been taken it is advisable to repeat the contamination audit in that area to establish the change in contamination level. In addition, close monitoring of improvement in the process yield should be carried out. The revised matrix can then be overlaid on the original one to illustrate the improvements.

The contamination audit assesses both the air quality and the type and concentration of surface contamination within the audit areas. The audit also aims to identify the sources of the contamination through detailed analysis of the samples and observation of the production processes.

The next stage of the contamination audit is the preparation of plans of every area to be audited. These plans should show the layout of all the equipment in the room and the positioning of all doors to the room. Any other points where material or product enters the production area should also be noted. A corner of the plan should have space for notes regarding the type of clothing the operators in the area are wearing and any other relevant details. These plans will be used to identify the position of all the samples taken so that the contamination audit can be repeated in exactly the same manner.

To assess air quality in the process environment, a tyndleometer is employed. This can provide a qualitative measure of the number of particles in the air and can be used in environments which would quickly clog up a standard air monitor. The sampling process is very rapid enabling real-time analysis of air quality at various locations within a room. The sampling positions are marked on the department plan. Samples of surface contamination are then collected using a special hand-held roller (such as the Teknek DCR roller) designed to pick up loose particles down to 1µm in size. The roller is passed over the surface and the particles collected are then transferred on to a sheet of special adhesive with a grid pattern on it. This concentrates and permanently holds the contamination for later analysis. The sample is then covered with a release sheet containing details of the exact location of the sample. Any relevant notes about the sample area should also be included, for example, peeling paint on equipment.

Areas to be sampled

The floor provides one of the key sites for contamination analysis, as examples of most types of contamination eventually make their way to the floor. Floor samples should be taken at the entrance to the room and in a passageway remote from the door. Comparison of the two samples will allow an assessment of the quantity and type of contamination being carried into the room.

Floor samples should also be taken under conveyors and other handling equipment as any contamination knocked off the boards will fall there. Special attention should be paid to the area where the material and people enter the department, as floor samples there will indicate the contamination coming in on the product.

Samples taken off the walls of production areas often show that the painted surface is flaking and shedding contamination. Noticeboards and whiteboards can also be significant source of contamination.

Any contamination from ceilings, being the highest point in the room, has the potential to fall directly on to the product being processed. Ceiling tiles are often made from pressed board which degrades with time. In addition, the inlet and exhaust filters for the air supply are often situated in the ceiling and both can suffer from a build up of contamination which will suddenly fall into the area below.

Most SMT equipment is fully enclosed to prevent ingress of contamination and to minimise operator access for safety reasons. Often the assumption is then made that inside the equipment does not require cleaning. The contamination audit focuses on sampling the surfaces inside the equipment to establish the levels of residual contamination which could be redistributed onto the substrates by either the forced airflow for cooling or the rapid movement of parts. The top of enclosed equipment is sampled to indicate levels of airborne particles which have settled out. Floor samples from under equipment are also taken to check the effectiveness of the housekeeping protocols.

Samples should be taken from the faces and edges of several boards immediately before any sensitive process, such as dry film lamination, exposure or AOI, to establish the actual level and type of contamination on the product. The presence of copper or epoxy particles or other process-generated contamination indicates a need for process evaluation but other types of contamination must come from the environment to which the board is exposed.

Totes and carriers, tolleys and carts are often used to transport product from department to department or operation to operation can be a major source of contamination.

People are a major cause of contamination, even in a controlled environment. Samples should be taken from the back and legs of operators for analysis. Even if cleanroom coats are worn, if the legs are exposed this can be a source of contamination.

The primary method of analysis is to use a microscope with a variable magnification up to 60× to examine each square in the sample grid. Each type of contamination within the square is identified from reference photographs and the number of particles of that type is counted. The totals for the completed sample are added up and the results entered in the department contamination matrix.

If there are unusual or unidentified particles in the sample, it is a good idea to have colour photographs taken so that further investigation can be carried out. This contamination should also be entered into the contamination matrix.

Failure to address contamination issues within the SMT process can lead to a number of serious problems such as:

The conventional solution to contamination is to wipe the underside of the printing stencil with a cloth and solvent. This can cause more contamination with the result that several boards can go through before defects are spotted. This leads to considerable downtime and reduction in production yields. Fibres can come loose from the cloth and contaminate the board.

In addition, a significant amount of contamination within an SMT line is airborne resulting from solder fumes. Airborne particles range in size between 0.01 and 1,000µm therefore if the pitch of the component leads is 20mm airborne particles can certainly be an issue. The finer the component lead pitch the greater the risk of contamination causing errors.

Defects generated in the screen printing of solder paste are the major contributor to overall levels of defects and so any reduction in contamination within this key operation has a very big impact on overall yields (Figure 4). 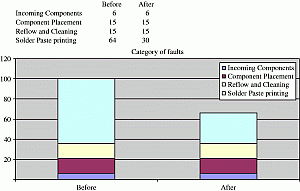 Figure 4 Incidence of SMT defects before and after cleaning

By cleaning the board and removing static charges before entering the production process it is possible to reduce defects. Figure 4 shows the incidence of defects before and after the board is cleaned and static removed.

Sheila Hamilton is a Technical Director of Teknek, the global leader in contact cleaning technology for the electronics sector. She joined Teknek in 1987 as technical director after working as a product designer (yachting equipment) and power station engineer. She has also run her own consultancy in the field of electronics component packaging. She has obtained a BSc in Mechanical Engineering from Glasgow University and is currently studying for an MBA at Strathclyde University. In addition, she is a recipient of two Smart Awards in the field of Electromagnetic Interference.