Printed electronics is a relatively new technology that is evolving very rapidly. The term encompasses printed and potentially printed electronics and electrics. Two years ago, it was thought that printed electronics would make things cheaper and one year ago there was much talk of tightly rollable electronics so a mobile phone could look like a pen because it will have a snap back roller giving a large display and keyboard when needed, that flexible plastic film also gathering power from light and heat no more flat batteries. These dreams are reaching reality today but it is now realised that printed electronics can do so much more.

Consider electronics providing superhuman powers not just repairing the disabled but enhancing their capabilities. Many such capabilities are now being demonstrated in laboratories.

Consider edible electronics for medical purposes Kodak has just patented that for medicine. Others make their new disposable electronic products edible because there is always a chance of a child chewing such a things as an electronic, paper game card (e.g. Menippos Germany, Thin Film Electronics, Sweden) or disposable skin patches delivering drugs and cosmetics in a controlled manner (Power Paper Israel, etc.). In the last year, there has also been a growth in work on biodegradable electronics printed on paper (Helsinki University, Finland; Abu Akademi, Finland; Stora Enso, Sweden, etc.).

Invisible (transparent) electronics will generate power and act as a computer on a window or watch face without spoiling the view. It will even be a display that is invisible until needed. Transparent organic light emitting diode displays have recently been demonstrated. The new venture 3T Technology in the UK calls itself “The Transparent Electronics Company.” With the help of Cambridge University, UK, it is bringing transparent displays, batteries, photovoltaics and transistors to market. Hewlett Packard and others have also demonstrated such capabilities in the laboratory. Then you are only at the beginning of understanding the awesome capabilities of printed electronics.

Now and soon even morphing

These are not distant dreams. A contact lens that projects video has been demonstrated. A stretchable, flexible, self-cleaning device that can be used as a mobile phone and keyboard that harvests solar energy and senses the environment is on view at the Museum of Modern Art in New York thanks to Cambridge University and Nokia. They call it morphing electronics.

In past years, some activities seen as frivolous have converged with professional disciplines such as healthcare. For example, video games (frivolous) are now used to assist the recovery of brain damaged patients (serious). This continues with printed electronics. It enables us to have electronics as art for the first time but consider the following report referring to Elumin8 screen printed, inorganic electrophoretic displays on polyester film. These displays are seen over huge areas in subways and on billboards. They are pasted up like posters yet they emit light in chosen patterns and sequences making advertising, signage and decorative features much more compelling. The information below was recently issued by Back Gallery Project in Vancouver, Canada, on the occasion of their exhibition of this British invention.

“A bio-responsive garment made of Elumin8 printed material turns the intimate breath of the wearer into pulses of electric aqua light. The inhalation and exhalation of the wearer activates a breath sensor that dims and brightens the printed lighting in the garment. The wearer is safely connected to the national power grid by an umbilical cord/power cable and while this creates a seductive light, it also creates a frisson of danger and unease.

Technology enables us to listen in on the mysterious and invisible signals that emanate from our bodies. Mostly, this data is used for medical purposes, but as an artist Suzi Webster transforms this private bio information into a metaphoric, wearable display of color, light, sound or vibration. Webster is interested in what is lost, found or suggested by this transformation, and how it explores the ways in which technologies impact and shape our experiences of being human. Her wearables are hybrid works that are responsive and dynamic; that explore intersections between sculpture and performance, fashion and computing, the body and its context, public and private in a critical way.

She completed a BFA at Emily Carr Institute and an MFA at the Slade in London, UK and now teaches in the Digital Visual Arts Department.”

The outstandingly successful investor Jim Mellon has recently invested heavily in solar power, initially in the form of the metals that will be needed such as gallium and germanium. He says it will be “bigger than the internet within five years”. He adds, “Solar is genuinely clean it ticks all sorts of zeitgeist boxes. Within five years, solar power will be as cheap as oil and gas without the subsidy.” Although, there is doubtless an element of exaggeration about this he has a point and he is right to perceive that little of this potential will be tackled with conventional crystalline or amorphous silicon. However, even conventional silicon is making some people very wealthy such is the race for the new power sources. For example, directors of PV Crystallox Solar in the UK netted $480 million, when it floated on the London Stock Exchange in 2008.

Need for a new approach to solar cells

Silicon photocells are seen in many places but the technology is severely limited. Silicon will never give tightly rollable devices let alone transparent ones or even low-cost power generation on flexible substrates. No hope here of strong thermo-photovoltaic effects, where heat generates the electricity when light does not. No hope of generating useful power when the light hits at a narrow angle or is reflected from windows or otherwise polarised. The typical silicon photovoltaic unit is heavy, inflating transport and installation costs and it may break into dangerous shards of glass. Amorphous silicon gives thinner layers but it has stability problems and all the above limitations as well, so, if we want a breakthrough we have to look elsewhere. Above all, there is no chance of either option being printed at high speed, reel to reel on low-cost substrates using low-temperature processes, where necessary involving very wide areas. Ubiquitous photovoltaics will need to be thin, flexible, environmental and very low in cost. Who knows, the subject is advancing so fast, we may even be facing the prospects of variants that are:

Fortunately, there are many new alternatives. Nano-silicon is ink jet printed by Kovio and others and it promises many of the photovoltaic features that conventional crystalline and amorphous silicon can never achieve. It can be printed reel to reel on stainless steel or other high- temperature substrates. However, most of the work on the next generation of photovoltaics is directed at printing onto low-cost flexible polymer film and ultimately on common packaging materials. The main contenders are currently as compared in Table I. 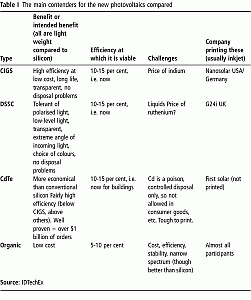 All the new forms of photovoltaic unit employ thin films and, to increase output and reduce cost, they are increasingly printed reel to reel. For example, G24 Innovations prints dye sensitised solar cells (DSSC) by ink jet and nanosolar is building two factories to ink jet print copper indium gallium diselenide (CIGS) photovoltaics. Others claim a better result, but not necessarily a lower cost, by using RF sputtering or chemical vapour deposition, for example and there are exciting new manufacturing technologies being proven such as Optomec Aerosol Jet® deposition which overcomes some disadvantages of ink jet.

Increasingly, the new photovoltaics will be co-deposited with batteries and other components. It will even form part of the new industries concerned with stretchable electronics, not least in healthcare, and electronic smart packaging. We are only just beginning to grasp what will be possible. People are even working on edible electronics and electronics that morphs into different shapes.

Certainly, this is not just a matter of dreaming. First, solar has taken orders of over $1.5 billion in recent months in the USA and France for its thin film cadmium telluride photovoltaic units, because they are more economical than conventional silicon. Its total order book now amounts to many billions of dollars. These devices did not need to be printed reel to reel to achieve that success.

Many different needs a place for all

These are exciting times, with wristwatches being developed that charge the battery from transparent photovoltaics over the viewing glass so the battery then lasts longer than you do. Photovoltaics is in space. This has its own requirements of radiation and heat tolerance, very high efficiency and very light weight so these are being met by complex multilayer constructions using thin films, for example involving gallium and germanium. However, if we are to generate very large amounts of power from broad widths of tape unrolled alongside hundreds of miles of freeway, we may care little about efficiency and a great deal about cost, so the exciting new organic photocells made by high-speed printing processes may be the answer, even at the 5-6 per cent efficiency now achieved.

On the other hand, Konarka and others have made fibers with photovoltaic organic surfaces, so energy generating clothing can be manufactured. After all, the US military has a target of reducing the weight carried by its warfighters by 70 per cent over the next few years and electronic apparel will be an important part of this. Then there is the market for leisure and workplace clothing, including self-heating, medical sensing and illuminating apparel, when the photovoltaics is combined with batteries.

To some extent, this revolution is part of the move to a $300 billion market for printed electronics. Indeed, 1,500 organisations are working on printed and potentially printed electronics and electrics and by far the favourite topic is the new photovoltaics, with the largest concentration 440 organisations working on this aspect and several already selling new photovoltaic products.

Whereas, CdTe, CIGS and DSSC photovoltaics are already being sold in the marketplace, the topic that has the second greatest emphasis, printed transistor circuits, has seen nothing sold as yet, so the photovoltaic activity is very much driving the whole subject forward. Indeed, the materials have much in common between all these devices.

Some developers are progressing organic layers while others are advancing inorganic layers, mainly inorganic compounds. Put at its simplest, this is a trade-off between it being easy to print organic materials such as polymers and oligomer precursors but the properties of the resulting devices are often poor. On the other hand, it is difficult to print inorganic materials but their properties are often much better. However, it will not be simply a matter of which wins. There are many very different needs to be satisfied and many of the most promising recent devices are based on composites and mixtures of inorganic and organic materials, including quantum dots and DSSC. They are neither organic nor inorganic. They are both.

Of the developers of new PV, about half are academic, but many of these are spinning off start-ups. The largest number of developers is in Europe, but the USA is investing as much as any territory. In Japan, a large number of major corporations is involved, including Honda setting up reel to reel CIGS production in the last year. This new industry is addressing the needs of two billion people that lack access to electricity and the two billion mobile phone owners who want to avoid flat batteries and much more besides. No one will need convincing that this is a huge new industry in the making.

For more on the new photovoltaics and electronics read the IDTechEx reports:

Attend the annual IDTechEx conferences “Photovoltaics beyond conventional silicon” in Denver, USA, 17-18 June and the conferences “Printed electronics” each annually in the USA, Europe, and Japan. The next Printed Electronics Conference is in Dresden, Germany, 8-9 April.