The ICT's First Evening Seminar of 2008 took place on Tuesday, 8 February, at the White Swan Hotel in Arundel following the Annual General Meeting. The event was chaired by the ICT's Technical Director, Bill Wilkie, and before the seminar's first speaker was introduced, he broke the sad news of the death of David Kingsley to the attendees. David had spent many years in the PCB industry and had made a significant contribution to the ICT until his retirement.

Unlike some recent ICT seminars, this one did not have a specific theme and the programme was therefore able to cover three wide ranging subject areas that were of specific interest to members. These were legislation, new technology and forecasting the future of the industry. The first presentation of the evening was given by Mike Inman of BSI and this covered the recently introduced REACH regulations. He began by giving an overview of the various related pieces of producer responsibility legislation that were already impacting much of the electronics industry supply chain from design to end of life. These included the RoHS and WEEE directives, as well as the battery and accumulators directive and the energy using products (EuP) directive. REACH was another piece of similar legislation and this would impact all users of chemical substances. It was estimated that around 100,000 substances would be implicated in REACH and Mike emphasised that REACH would have an impact on virtually all industrial sectors, including the downstream users. The REACH regulations would replace 42 existing pieces of legislation and, instead, would give one unified European system. REACH would also address World Trade Organisation obligations and reduce animal testing, as well as supporting duty of care. Mike stated that if there was no data on a substance there would be no market for it! He then outlined the REACH timetable and, although the regulations came into force in June 2007, the next key date was June 2008, when the 6 months pre-registration period for “phase in” substances began. Other registration deadlines, which depended on tonnages, were in 2010, 2013 and 2018. There were a number of exemptions in REACH and examples included substances in transit, radioactive substances and waste, which was covered by other directives. Also, food and pharmaceuticals were exempt. There was now a single central agency based in Helsinki, known as the European Chemicals Agency (ECHA), which was tasked with supporting REACH implementation across Europe and with providing the requisite guidance and software tools. Pre-registration would be paperless and could be achieved using one of the database systems such as REACH-IT or IUCLID 5 and this process would close on 1 December 2008. Mike then went on to give a description of just what constituted a so-called “phase-in” substance. For substance quantities above 100ton per annum evaluation was required and a test programme would be agreed by the ECHA. The ECHA was also responsible for coordinating the testing and any substances of high concern would require Authorisation. Examples of such materials included carcinogens, POPs, and mutagens. There would be a central data repository and Substance Information Exchange Forums that would be used to facilitate data exchange. Safety data sheets would be used to communicate information down supply chains and some examples were shown. Within REACH there were also REACH Implementation projects. Mike then went on to outline what substance users must do to comply with REACH and this included letting manufacturers know of the proposed uses of their substances and participating in a two-way communication process. BSI was offering training services and help with GAP analysis, file preparation and the pre-registration process.

The second presentation of the evening was given by Darren Southee from Brunel University, who gave a talk on the work of the Cleaner Electronics Research Group. His presentation was entitled “Printed interconnects, components and batteries using offset lithography”. The aim of the Cleaner Electronics Group was to work towards the reduction of environmental impacts from electronics products and it had over 11 years of experience in this area. Darren gave a brief review of the history of the group and said that much of the work had been centred on use of the offset lithographic printing process, which is more traditionally used for printing books and magazines. Early work had focussed on the printing of silver-based conductive inks to form conductive tracks and the technique was capable of both high-resolution and high- printing speeds, whilst also being low cost. A key initial challenge had been to achieve low enough sheet resistances to make the inks of practical use in interconnect applications. Later work had then been focussed on increasing the conductivity of the silver inks and subsequently on replacing the silver with copper oxide. Examples of the circuits produced were shown and these included a working telephone, a strain gauge and a digital thermometer. More recently, Darren had been investigating the fabrication of voltaic cells using the conductive lithographic film route. An initial feasibility study funded by the Innovative Electronics Manufacturing Research Centre (IeMRC) had shown that this route was indeed possible and zinc-carbon-manganese dioxide type cells had been successfully demonstrated. Two substrate materials had been used, namely PolyArt and Melinex and different paste thicknesses were also evaluated. Peak currents of 18mA had been achieved.

Areas for further work were also identified and these included improving to cell shelf life and peak current capability. Data were shown illustrating the wet shelf life improvement that had already been achieved and cells with a stability of several weeks could now be fabricated. Cell capacities of 10mA hours had also been attained. A technique known as Electrochemical Impedance Spectroscopy had been used to characterise the cells. This gave an indication of what was happening inside the cells and example spectra were shown for cells produced at Brunel and they were compared to spectra from conventional cells. There were several industrial partners supporting this work including Hallmark, Gwent Electronic Materials and Du Pont. Work had also been carried out on the manufacture of electroluminescent displays that could be printed using offset lithography and data were given showing how the luminance varied with applied voltage. Low-power thermochromic displays had also been fabricated. A key part of the presentation was when the lights were dimmed in the room for the demonstration of a printed electroluminescent device that was powered by a printed battery!

The final presentation of the seminar was given by Francesca Stern of BPA Consulting Ltd and was entitled “Forecasting for the PCB Industry”. She began by outlining why forecasting was needed; essentially, good forecasting enabled senior company managers to take their businesses in the appropriate direction. When forecasting for the PCB industry, it was important to monitor a number of other economic sector growth factors, e.g. the semiconductor industry. Most economic factors tended to show positive growth curves, but quite often these could also be quite erratic when data were reported on a month-by- month basis. Smoothing over a suitable period such as 3, 6 or 12 months could thus be useful in ironing out these erratic swings for forecasting. Leading indicators were also useful for analysing the general economic state of the economy, e.g. house build starts and this type of information was just one of the many sources that were used to help produce an accurate industry forecast. BPA had also developed a methodology for longer-term forecasting which enabled them to produce accurate sectoral forecasts, e.g. for PCBs and computers, etc. BPA also had over 30 years of cumulative data which it could draw on to help produce future forecasts. Some examples of historic forecasting were given and compared to what happened in reality; the results had generally turned out to be remarkably accurate. Some of the factors that could upset a forecast were also discussed. 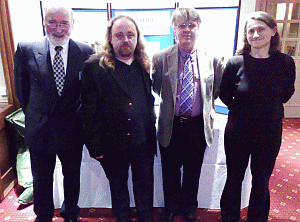 Information such as PCB lead times was also able to help give a good indication of what was actually happening in the industry. European PCB price trends were shown and it was stated that European PCB prices were currently showing a slight increase, despite the pressure on prices from China. European electronic equipment production was predicted to be flat during 2008 with some resumption of growth occurring in 2009. Towards the end of the presentation, example road mapping information was also presented including the “Flipchip BGA Substrate Technology” roadmap and this included information on the likely trends in materials and pitches as well as who was typically using this technology. Kyocera's CPCore, Ibiden's Filled Via Stacked-up Structure and Endicott Interconnect's interconnection technologies were also introduced.

Overall, this seminar provided the attendees with information on three disparate but important and interesting subjects that should be of key interest to all those involved in the PCB industry. The ICT programme of evening seminars continues throughout the year and more details can be found at the ICT web site. The ICT Annual Symposium will be held at The Tweed Horizon Centre in Newtown St Boswells, Melrose on 3 June. See web site: www.instct.org/events.asp for more details.