The ICT's Evening Seminar on Design for Manufacture was held at its regular southern venue, the White Swan Hotel in Arundel. The good-sized audience was welcomed to the event by Bill Wilkie, the ICT's Technical Director. Bill continued by thanking the event's sponsor, Martin Morrell and Artetch Circuits. He also gave an overview of the benefits of ICT membership and outlined the ICT's recent activities and its plans for the future. He then described the theme of the seminar before introducing the evening's first speaker.

Sue Critcher of Routability Ltd and Total Board Solutions Ltd gave the opening presentation on PCB Design and it was entitled “The design community”. Sue had been working on PCB design for many years and the aim of her presentation was to give an overview of some of the standard problems that could impact design and which were frequently encountered by designers. The first of these was “Annular Ring” where there were often discrepancies between the dimensions that the board makers needed and what the designers intended. Copper slivers were another area that had attained increasing significance because of the need to achieve ever higher interconnect densities and the consequent need to route tracks through smaller spaces and ever closer to each other. Solder mask materials could also lead to issues where libraries had not been updated and where autorouters were used. A post routing command could be utilised to help space out traces but this was not often used. Solder mask issues could also occur between two closely located components and this was particularly important as boards moved to higher frequencies and where impedance control was more important (see below). When designing impedance matched boards there was a even greater need for dialogue between the designers and the fabricators in order to ensure that the designed boards could actually be fabricated. Sue also highlighted the importance of developing an early dialogue with the fabricators and the importance for the designer of understanding their capabilities. One good way of achieving this dialogue and of getting a better understanding of just what could be manufactured was for the designer to visit the fabricator's facility and to see the actual board-making process in operation.

The second paper of the seminar was presented by Neil Chamberlain of Polar Instruments and was called “Controlled impedance”. The main focus of the presentation was on impedance modelling on multiple dielectric substrates and their influence in impedance control. The key challenge for many manufacturers was not just to move to higher frequency devices but to move to higher frequencies while still being able to use standard materials. Despite their shortcomings conventional laminates such as FR4 were often the preferred choice rather than the more “exotic” high-frequency materials since these were often considered to be too expensive for many applications. FR4 was a difficult material to model because of its composite structure of epoxy and glass. Local structural inhomogeneities could lead to significant variations in important properties such as dielectric constant across a board. This could be important where, for example two tracks passed over different board structures, e.g. one that was glass rich and the other resin rich. Neil also described how some board builds were made of mixed materials which again complicated the situation. For example, a multilayer might be mostly composed of standard FR4 material but could also contain an inner layer of a more specialist material. He then described how other important materials such as solder mask could have an influence on high-frequency properties. He cited the example of solder mask thickness, which could have an impact on impedance especially in the inter-trace region between closely spaced tracks. Similarly, the resin layer in a differential microstrip design also had an impact on impedance. The ever increasing move to finer line widths and higher operating frequencies would result in more lossy lines. The IPC's D24/C “High frequency high speed” Committee was currently working on the development of a standard method for loss measurement. In conclusion, it was also stated that there was a need for simplified approach to the modelling of structures, although it would still be necessary to measure impedance.

The next presentation on “Data management in electronics design and manufacturing” was given by Jan Keijzer from Adeon Technologies BV, a company based in Oosterhout in The Netherlands. Jan began by introducing Product Lifecycle Management (PLM), which was defined as the process of managing the entire lifecycle of a product from conception to end of life. Smooth collaboration across the supply chain was the key to success, especially with consumer electronics, and data management was a key part of this activity. There was likely to be an increasing need, and demand, from OEMs for all supply chain partners to provide information into some type of PLM system. Jan described how the established large and formal PLM systems were typically not able to handle fast changing data or to interface with other PLM systems. He then introduced a new design information management system known as CXInsight. This was developed to be a scaleable system and had been built to operate in a fast moving dynamic and distributed environment. It provided full traceability for all users and yet provided 128 bit data encryption to give high levels of security. The system allowed project managers in both the design and manufacturing environments to have full visibility across projects and activities and tasks. 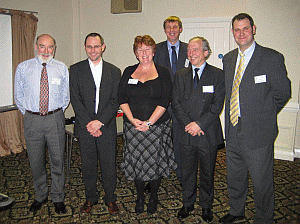 The seminar concluded with a presentation from Matthew Beadel, Product Development Manager of Artetch Circuits on “Control centre automated design for DFM”. Matthew began by giving a definition of design for manufacture. This was described as a pre- manufacturing check of the suitability of a design for manufacture and an assessment of the product's likelihood of being manufactured with a high- acceptable yield through a given manufacturing process. DFM was used at Artetch every time a board design was submitted to the company. He then went on to describe how Artetch offered both a standard and a premium DFM service for customers to help them make an assessment of their board designs. This service required the customers, or potential customers, to submit a variety of information including their ODB++ or Gerber 274X data. Artetch could offer a rapid turnaround with results were communicated back to premium users within 30min by e-mail. Matthew then showed some examples of the typical DFM reports that were generated and how they highlighted potential problems. The DFM tool could also compare the results from a specific board design against company or industry standard specifications and then give an immediate response. The standard and premium service was offered free of charge by Artetch and could be located at www.DFM4FREE.com or via the Artetch web site; www.artetchcircuits.co.uk

Overall, this was a very useful and focussed seminar with four presentations from industry experts on a topic that had attracted an audience of both designers and manufacturers. The seminar concluded with a buffet supper and an opportunity to network with the speakers and delegates.