On the first Monday and Tuesday in March, the beautiful city of Budapest hosted the Green Electronics Conference. Held at the Danubius Hotel Gellert, the conference marked the 10 year of the European CARE Electronics programme and was attended by over 160 people from a total of 30 countries.

The conference was opened by Mr Bela Mohacs, the Hungarian Deputy Minister of ICT and he gave a speech that highlighted how new technologies have added a richness to our culture, as well us making us all more efficient and productive. He also highlighted how, despite all this technology, we were all working much harder and longer. As Hungary prepared for its forthcoming entry into the European Union, Mr Mohacs said his personal mission was to increase ICT penetration in Hungary and to fight what he called the digital divide, so that his country could move towards having a knowledge based economy. There was a new legal framework being implemented to help achieve this aim and there were programmes to help people obtain PCs and to have access to the internet. Hungary had achieved a 41 percent increase in domestic internet access in the last year.

Following this opening speech the rest of the morning session was dedicated to a series of presentations detailing the status and plans for the implementation of the WEEE and RoHS directives in Poland, Hungary, the Baltic States and Slovenia. These were complemented by talks covering end-of-life product recycling in Japan by Mr Tanaka of Matsushita and the compulsory take back and voluntary financing systems for WEEE in Switzerland (Plate 5). 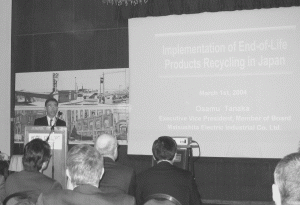 The Monday afternoon session began with a review of state-of-the art collection logistics by Gregor Eckerth of the company Interseroh in Germany. The differences in the cost of recycling mobile phones depending on the sytem employed was highlighted. A model used in the UK was almost ten times as expensive as a model employed in Sweden. Andrew Baynes of Apple then presented examples of end-of-life management of products at Apple. He covered their take back experiences, how to take the first steps to implementing a take back scheme and offered some tools and tips. Bernd Kopacek of Ecotronics in Vienna then described his company's activities relating to the reuse of products and components from ICT equipment. Ecotronics has a strategy to recover discarded products at the highest possible level in order to obtain the most value for maximum economic and ecological benefits. Where possible, whole products or sub-assemblies were dismantled for reuse. There was also a market for recovered electronic devices and when the value of these was more than around 30 to 50 eurocents it became increasingly economically viable. Experience had shown that component recovery could give a yield of more than 98 percent of devices in working order. The company had a unique automated disassembly technology for mobile phones and printed circuit boards.

The next two presentations were on plastics recycling. The first was from the Spanish company Gaiker and covered the state-of-the-art in the identification, sorting and recycling of plastics. The presentation detailed methods, such as the various types of spectroscopy, that can be used to enable different types of plastics to be identified. Details were also given of their "Sureplast" plastic identification and sorting plant. The second paper was on plastics recovery and recycling ahead of the WEEE directive and was from the company VKE in Germany. The day concluded with presentations on the latest technology used in the processing of cooling appliances and white goods and the dismantling and processing of ICT and brown goods in the Nordic countries. The final paper of the day from the company BayLogi gave practical examples of WEEE processing in Hungary.

The second day of the meeting began with a paper on Aging and Materials, which was presented by Andreas Middenhof of the Fraunhofer Institute in Berlin and this was followed by paper on Active Disassembly using Smart Materials by Pia Tanskanen from the Nokia Research Centre in Helsinki. In this latter presentation principles of active disassembly were described, including the use of shape memory materials in screws, snap fixings and clips. A Nokia 5110 mobile phone was shown that had been rebuilt with five smart material mechanisms built in to the product to aid disassembly. The vision of an active disassembly process was also described and it was concluded that, although more material research was needed in this area, active disassembly could offer an industrial scale route for dismantling end-of-life electronics. There then followed paper from ReUse that described the activities of their "Disassembly Factory", with the focus being on PCBs which are seen as a source of valuable materials whilst also providing components that can be recycled. The problems associated with component recovery were discussed and contrasted with the benefits offered with the automated computerised disassembly process used by ReUse. Using up to date market price data, an intelligent, semiautomatic disassembly cell was used to select and robotically remove components, via laser or infra-red desoldering, whilst imparting the minimal thermal stress to the components.

Dr Bernd Kopacek continued with the same theme in his presentation on the MOBILEREC project, which involved the collection, disassembly and recycling of mobile telecommunications equipment. It was stated that the world market for mobile telephones in 2007 was predicted to be around 735 million units. A modular disassembly cell had been developed for recycling end-of-life phones that enabled reusable parts such as specific devices and LCDs to be extracted. The process used a combination of destructive and non-destructive disassembly technologies and the fractions gained were very clean whilst ensuring minimal damage of valuable parts. The project had demonstrated that it was possible to develop an eco-efficient process for the recovery of mobile phones through the extraction of reusable components and optimised material recycling.

There then followed a presentation on the eco- efficient treatment of television sets and monitors by the Spanish company Indumetal. In a project known as "TV Target", a number of companies in Spain had collaborated to explore the development of a semiautomatic process for television and cathode ray tube (CRT) dismantling and recycling. A video demonstration was shown of a semiautomatic, modular process that could separate the CRT panel glass from the funnel glass for more efficient recycling. Details of the related ReLCD project were then reported by Reinhard Roth of Ecotronics. This was also a multipartner project that had the objective of providing a cheap and fast test methodology for testing obsolete liquid crystal displays and to develop a technology that would enable them to be refurbished.

The next part of the conference covered a variety of topics including a central European electronics recycling network (P. Kopacek, Vienna University of Technology), a virtual European recycling centre (E. Larrauri, Gaiker, Spain), and a cost management system for greening electrical and electronic equipment (J. Alonso, Lear). The morning session was concluded with presentations from Sony, Germany, on environmental life cycle information management and acquisition and a review of the Ecolife II thematic network by Michael Brandstotter, of SAT, Austria.

The final afternoon of the conference began with a presentation from Motorola on best practice in ecodesign and an excellent example shown was of the environmentally improved mobile phone that Motorola developed with Swisscom. This phone had a number of key features including a lead-free solder, a recycled plastic case, a bromine-free PCB and an energy efficient charger. This was followed by a presentation from Joachim Hafkesbrink of Arow, Germany, which covered strategies and tools towards sustainable development. This very detailed talk emphasised the importance of embedding ecodesign in business and of taking a proactive approach to legislation monitoring. 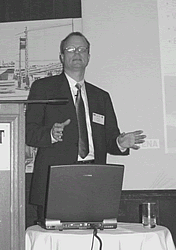 The next paper of the day was given by P.Oscar of STENA Technoworld in Sweden and this detailed a European Advanced Recycling Network (EARN) (Plate 6). This was followed by an introduction to the Eco-design of Energy Using Products Directive (EUP) by Jan-Willem Sheijgrond of Epson. The EuP directive is a framework directive and will have no direct impact on manufacturers their obligations will be set through voluntary measures or implementing measures. EUP will affect global markets through generic or specific design specifications. The final paper from the Technical University of Delft was entitled "Successful ecodesign is not an environmental issue". An example of a green television designed by Philips was given. This was designed in 1996 and offered environmental benefits in a number of areas but it unfortunately was never commercialised. It was stated that the scope of ecodesign had widened substantially from technical issues to encompass both business and value chain issues as well.

Overall, this was a very well organised conference with the range of speakers highlighting the breadth and volume of activity within the electronics industry to address current and forthcoming environmental issues and to take a proactive stance in making electronics more "green". The large attendance at the conference is a testament both to the importance of the subject material and to the content of the conference itself. The organisers are to be congratulated for putting together such an excellent conference, and holding it in such a beautiful city.