A week before Productronica 2003 in Munich, the Taiwan Printed Circuit Association (TPCA) Show was held from 29 October-1 November 2003 at the Taipei Convention Centre in Taipei, Taiwan. This centre is next to the highest building in the world, the Taipei 101 which is more than 500 m in height. The show was organized for the fourth time. For this event, the Printed Circuit Association and the Surface Mount Technology Institutions agreed to hold the show together and the result was a very good attendance. It is estimated that there were over 300 exhibitors and 80,000 visitors at the show (Plates 1 and 2). Participants showed new PCB fabrication technology as well as PCB assembly equipment and processes. During the show, many PCB fabricators reported having a full production load. Equipment fabricators showed new orders coming in and assemblers said that they were willing to pay more for PCBs if supply times could be shortened. As Taiwan's PCB fabricators were very busy, new orders at present had longer delivery times and higher prices. High-end PCBs that have to be purchased from Japan were very difficult to get, as the market in Japan was also very busy. Flexible printed circuit boards and embedded passive technology were just two of the hot topics much in evidence at the show and there were various "forum sessions" dedicated to these subjects. The TPCA also co-organized the "Taiwan PCB International Purchasing Competitive Symposium" with the Communication Supply-Chain Association. 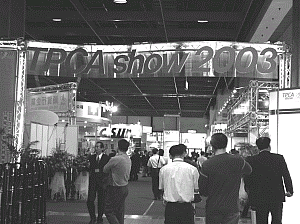 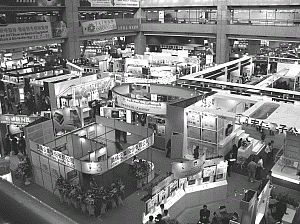 The TPCA Exhibition is a World Electronics Circuit Council (WECC) event and this meant that all WECC member PCB associations support and send representatives to the event. Europe was represented by Michael Weinhold who is the technical director of the EIPC (Plates 3-5). As this event was organized by the PCB industry associations, any income from the show is put back into the PCB industry for the benefits of the PCB industry. 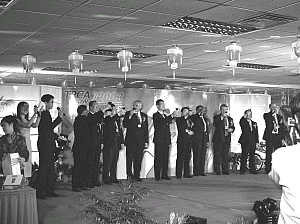 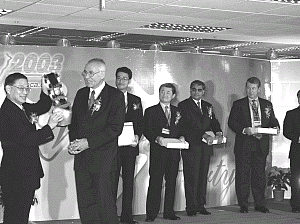 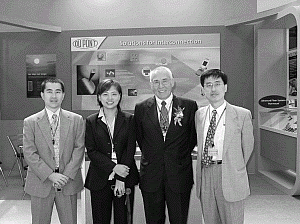 The show gave a good indication of the current market trends in the industry. High-end PCBs would be in demand for the next generation of mobile phones, laptop computers and PDAs and this type of board had largely been sourced in the past from Japan. Presently, however, Japanese fabricators were found to be very busy and they would not ship PCBs to Taiwan. Taiwanese PCB fabricators therefore needed to develop their own processes for the production of advanced PCB and this would result in many new investments in equipment and technology. The present standard Taiwanese products would be moved over to China, as most PCB fabricators in Taiwan had either their own PCB factories in mainland China or had a close cooperation with companies based in mainland China.

Flexible Circuits and Rigid Flexible Circuits were said to have the highest market growth in Asia at the time of the show. Many of the newly emerging hand-held electronic devices could only be manufactured if this technology was used. As the markets in high-end applications were growing over-proportionally, this type of PCB would be needed for most of the new electronic devices.

Equipment suppliers from Europe are well established in the Asian markets outside of Japan. For example, Schmoll, who exhibited at the show, sold nearly 300 drilling machines in the prior 12 months in the Asian Market. Another exhibitor, Siemens Dematic, has moved its laser laboratory to Taipei. UV laser technology utilizing micro-trepanning technology allows the manufacture of small holes with diameters of less than 60 μm. The hole shape and the diameters are very well controllable. In addition, UV lasers using ablation technologies do not leave residues in the holes. Siemens claimed that with their dematic microbeam laser, the plating process becomes very reliable due to the clean holes that are created.

System on package is an increasingly popular fabrication method for functional modules that are then soldered to the PCB at a later stage. However, this technology requires packages made by using PCB fabrication processes. Very small holes (< 70 μm) and lines and spaces of 60 μm are often needed. Hole plugging by plating is a process that is needed by the current packaging industry and will be needed by the PCB sector next year.

The WECC held its annual meeting during the TPCA show. It was an opportunity for attendees to share market data and to discuss trends in customer behaviour and tariff issues relating to PCBs or assembled units that are crossing boarders. Understanding the technical trends and helping the PCB fabricators on tariff issues is a key objective of the WECC.

The TPCA show gave a very good indication of the current market trends, of new PCB fabrication technologies and the needs for new material and processes. It also highlighted the shortage of some high-end materials. However, it is important that the PCB fabricators understand these trends and make the necessary investments in equipment, know-how and people in due time to be ready when the market demand for high-end PCBs increases.