The usual late summer slowdown in the N. American PCB industry was far less severe this year. Chart 1 shows the PCB book/bill seasonality from 1995 to 1999. 1995's summer growth was "phony" due to feared laminate shortages, but comparing 1996 to the present the 1999 book/bill fared the best. On an actual basis when compared to an admittedly poor June 1998, this June's rigid PCB $ orders were up 6per cent, rigid laminate square foot orders up 33 per cent and flex circuit $ orders up 28 per cent. It would appear that a solid recovery is under way but further analysis suggests some caution. 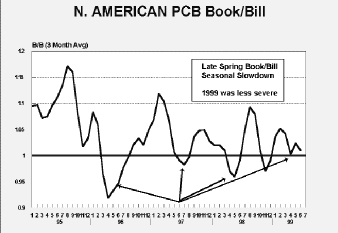 The key to sustained growth is an ongoing increase in electronic equipment orders. Chart 2 shows these orders on a monthly, 12-month average and trend-line basis from 1982 to the present. Notice that the monthly orders are above the 12-month average, indicating continued growth. For June 1999 electronic equipment bookings were up 8.9 per cent on an annual and 9.4 per cent on a three-month basis and up 6.3 per cent versus June 1998. 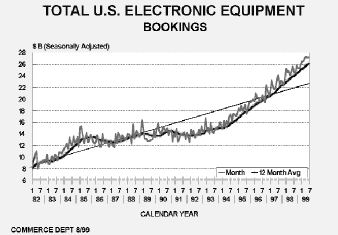 Per Chart 3 the 3/12 rate of equipment order growth is 9.4 per cent versus rigid PCB's 6.4 per cent but there seems to be signs of a slowing. Chart 4 "dissects" the equipment portion of Chart 3 into its four components ­ military, measurement and control equipment, computer and office, and communication equipment. Notice that communication equipment is driving the overall growth while computer and military growth are slowing and the instrument expansion is flattening. Chart 5 gives more detail including annual, three-month and one-month growth for many key PCB related measurements. 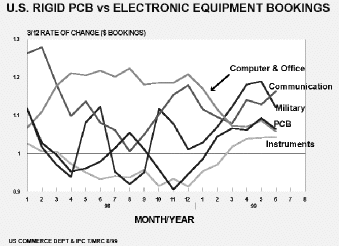 Chart 6 shows communication equipment orders on a monthly and 12-month average basis. June 1999 was up almost 22 per cent versus last June.

Every July Electronic Business publishes a list of the largest global producers of electronic equipment by category. Their Website includes all these charts. See http://www.eb-mag.com/registrd/issues/9907/0799top3.htm

Chart 7 reproduces the communications equipment data. Others on the Website include military and government, consumer, instruments, controls, medical, computers and peripherals. These make excellent target lists for a PCB salesforce!

Chart 8 shows the financial performance of the publicly traded N. American PCB producers. Without Sanmina (80 per cent assembly/20 per cent PCB) the group would not have been profitable in the second quarter of 1999. Price degradation and some ill-timed acquisitions hurt many companies' earnings.

To prevent inflation Alan Greenspan is preparing to raise interest rates to slow economic growth. But the fragile PCB industry needs a continued expansion of electronic equipment orders to ensure a modest profit. This could be threatened if US growth is slowed too fast. Going into an election year any interest rate adjustments will probably be modest. For the balance of 1999 and into early 2000 I expect PCB orders to expand at the same overall rate as electronic equipment (6 per cent at present) but a focus on the high growth customers (Chart 7) and end markets (Chart 4) will differentiate the better PCB fabricators.