World production of printed wiring boards and flexible circuits reached a record high of $34.3 billion in 1998. This is according to the Report on the World Market for Printed Wiring Boards and Substrate Materials recently published by IPC's Technology Market Research Council (TMRC).

Input received by organizations, manufacturers, and industry experts from around the world helped build IPC's estimates of global rigid printed wiring board (PWB) production of $31.5 billion and flexible circuit production of $2.8 billion.

Japan is ahead of the competition when it comes to the global market for rigid PWBs. Japan accounted for 25.3 per cent of the world market in 1998 followed by the USA (24.5 per cent), Taiwan (10.5 per cent), China/Hong Kong (6.6 per cent) and South Korea (5.3 per cent). Both Japan and the USA lost market share compared to 1997, down from 25.4 per cent and 26.1 per cent respectively. This marks the first time in three years that the USA has trailed Japan in the world market for rigid PWBs. The European market also witnessed a decreased world market share from 20.9 per cent in 1997 to 17.9 per cent last year.

Japan also dominated the flexible circuit world market in 1998, accounting for 36 per cent of production. The other top five players included: USA (31 per cent), Taiwan (6 per cent), Thailand (5 per cent) and Germany (4 per cent). 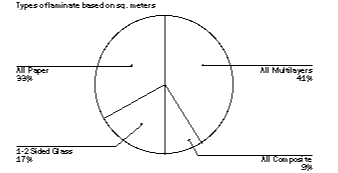 The TMRC World Market Report also reported worldwide microvia production. In total square feet, Japan produced 5.2 million (480,000m2), North America accounted for 300,000 square feet (28,000m2), and Europe and other parts of Asia accounted for another 200,000 (18,500m2). This translates to a world market share of almost 88 per cent for Japan, where production is expected to continue to increase based on capacity and projected growth by the major PWB manufacturers. Based on current production levels and planned investments, the report says Japan and other Asian producers are expected to continue to dominate production of microvia substrates in the near future. Microvia information is based on data contributed by Prismark Partners LLC.

In the survey, conference attendees identified the technologies they felt should be addressed. They were then asked to rate how well IPC Printed Circuits Expo covered those technologies. The survey was commissioned by IPC.