How much debt? The rise and rise of bond finance

Bond Finance is increasingly favoured over equity finance these days. This is a trend that started in the mid-1990s, and has accelerated dramatically as the Eurobond market has taken off following the creation of the Euro (see Figure 1). There are powerful economic forces underpinning this change: the world-wide fall in government borrowing is making bond finance cheap; the current obsession with "new economy" stocks is making equity finance expensive in the "old economy"; and in the UK the extra tax levied on dividends paid to pension funds has pushed up the post-tax cost of equity still further. Faced with these changes in the relative cost of debt and equity, which are both large and permanent, every finance director needs to reconsider the debt-equity mix of his company. If it was right a year or two ago, it cannot be right today.

"How much debt should we be carrying?" is one of the most important strategic questions that top management has to grapple with. It is also one of the most difficult. The basic facts are well known. Debt is cheaper than equity, even before you take tax into account, and is a lot cheaper post-tax. For an average UK company the cost of equity today is around 11 per cent. The cost of debt is closer to 7 per cent, which in the UK means around 5 per cent post tax. 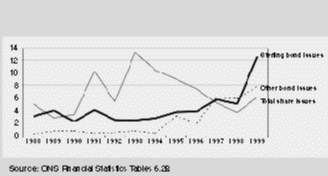 If you do the sums from a shareholder value perspective, borrowing has obvious attractions. On standard assumptions, every £10 million of additional borrowing will generate tax savings with a net present value of £3 million, which can be added to the value of the firm. More generally, ignoring risk and assuming the tax savings are properly valued by shareholders, if you increase debt by 10 per cent of the value of the company, you should boost the share price by 3 per cent. And if you can save money by re-financing relatively expensive short-term debt (e.g. bank borrowing) with cheaper long-term debt, the potential increase in value could be significantly greater than this. So why not borrow every penny you can lay your hands on?

The answer, of course, is that debt can give you sleepless nights. If profits take a nose-dive you can always pass the dividend, but if you miss an interest payment you will be in serious trouble. Debt finance can save you a lot of money when times are good, but may lose you the firm when recession strikes.

So how do you strike the balance between the benefits of extra debt, which show up in the cash flows and are relatively easy to quantify, and the costs, which are reflected in the discount rate applied to those cash flows and are both uncertain and difficult to measure? As with most difficult business issues, a good starting point is to find out what other companies do. The PwC economics team has analysed debt to value ratios for a large sample of companies in the FTSE 350. But to make sense of this information you need to understand the relationship between debt and risk.

A good place to start is with the macro-economic risk, which is all about the effect of recession on a company's cash flows and borrowing costs. This is likely to vary enormously across different industries. A company selling necessities, like fuel or water (or, to the smoker, cigarettes) will be relatively sanguine about the effects of recession. A company selling luxury consumer items (jewellery, holidays) will face a much sharper downturn. And for a business which depends on the investment cycle (e.g. housebuilding or construction), the recession risk is greater still. So you would expect to find that firms in cyclical industries were in general less highly geared than those in the non-cyclicals.

We can verify this proposition using a measure of macro risk, known as the beta. The equity beta of a company measures the extent to which the returns on a company's shares vary with those of the market as a whole. Cyclical companies have betas greater than unity, non-cyclicals have betas of less than one. The market, and the average company in the market, has a beta of one.

A company's equity beta depends on two things: how cyclical the industry is; and how much debt it has. The impact of debt on any company is to exaggerate the volatility of profits. In the upturn the geared company grows faster than an identical ungeared company, and the converse is true in the downturn. It follows that the higher the gearing of a company, the higher, other things being equal, will be its equity beta.

We use this measure in Figure 2, which sets out a risk map of British industry, based on our analysis of the FTSE 350 companies. Each point on the chart represents an industry. On the vertical axis we can read off the riskiness of the industry, as measured by the asset beta. On the horizontal axis we can read the level of gearing. The basic message of the chart is that industries lie in an envelope clustered round the downward sloping line, labelled the unity equity beta line. It confirms the common-sense analysis set out above: firms in industries with a high inherent level of macro risk (advertising, house building) take on relatively little debt. Firms in industries which face a lower level of macro risk (tobacco, water) tend to make life more exciting for themselves by taking on more debt.

We can make a stronger statement: the evidence set out in Figure 2 suggests that companies and their shareholders generally feel most comfortable with an equity beta reasonably close to one. So, for example, a company in an industry with an asset beta of 0.6 needs to gear up, to the point where equity accounts for only 60 per cent of the value of the firm, in order to deliver an equity beta of one. (The value of a firm is measured by the market value of its debt plus the market value of its equity.) More generally, the amount of borrowing should be inversely proportional to the asset beta. 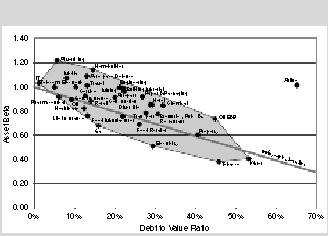 The risk map serves one simple purpose: it allows you to benchmark your debt policy against the FTSE 350 group of companies. If your firm lies outside the shaded envelope, then you will need to explain why you have so much more or less debt than the average company facing your level of macro risk. If you are inside the envelope but to the left of the unity equity beta line, you may want to consider whether you can take on more debt.

The PwC survey of the FTSE 350 also reveals that debt policies vary enormously, even among similar companies facing similar risks. This suggests that in many companies there is a lot of value to be extracted by moving to the optimal level of debt. The calculation of optimal debt levels is complicated, but the cost is a small fraction of the value that can be created by getting the debt level right. The risk map is a tool to help senior managers assess the size of the potential gains. It is not a substitute for careful analysis. Rather, it offers a quick method of judging whether such analysis might be worth undertaking.

Bill Robinson is head UK business economist in Financial Advisory Services at Pricewaterhouse-Coopers. He is a former special adviser to the Chancellor of the Exchequer.