The mouse that squeaked

The mouse that squeaked

Earth-shattering, paradigm-shifting, epoch-making: the hype and jargon surrounding all things to do with the internet are enough to make all but the most hardened of enthusiasts wince. And the banking industry is no exception. No lesser man than Bill Gates who, it must be admitted, knows a thing or two about technology, famously declared a few years ago that, thanks to technology, banks would go the same way as the dinosaurs. You can see his point. On the one hand there are traditional banks with masses of branches, expensive staff and excess profits; on the other all those nimble e-banks with no branches, minimal staff and, naturally, no profits at all (something of a competitive advantage that). Products will become commoditised because, thanks to the click of a mouse, consumers will be able to pick and choose between them.

Perhaps, though, Mr Gates was a little premature. For a start, it seems odd to write off an industry that is raking in huge, in some cases record, profits (though stockmarkets just about everywhere in the world have been doing just that in recent months). To be fair, investors are concerned less about the present and more about the future, and the future for traditional banks, they seem to be saying, looks very bleak indeed.

Not, however, as bleak as might first appear, or at least not uniformly. Banks are not unused to technological change: ATMs were introduced in the 1970s and telephone banking in the next decade. Both of these were seen by many as heralding the demise of banks as we know them. It has not quite turned out that way.

Is the internet any different? In one way, of course it is, for the internet is a far more powerful tool than either of these previous two technological changes. It lowers barriers to entry, cuts the costs of offering banking products, and breaks down geographical borders. The likes of Net.B@ank or E-Loan, two American online banks, claim that they are able to undercut their competitors substantially. Net.B@ank says its operating expenses are about half those of traditional rivals; E-Loan, which specialises in online lending, reckons that it is able to save borrowers about three-quarters of a percentage point. Search engines are now starting to offer consumers the best deal. Cue disintermediation of traditional banks.

Or so the argument goes. In fact, things are rather more complex. There is, for a start, no reason why existing banks cannot do the same thing as new rivals. In America, Citigroup, Chase and Wells Fargo, to name but three, are developing big online banks. In Britain, Lloyds TSB is using the internet to expand across Europe; Barclays' online bank now has 600,000 customers, 100,000 of whom were added in January alone. And in Scandinavia, where online business is probably more advanced than anywhere else, MeritaNordbanken now has half of its customers banking online. Perhaps, indeed, they can do it better. Wingspan.com, America's best-known online bank, has found it very expensive to pinch customers from other banks. E-Loan has not fared much better. In short, start-up online banks have struggled to make much of a dent. 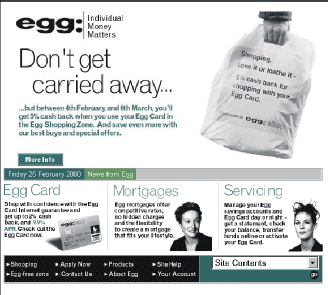 Four things weigh in the favour of traditional banks' online strategies. The first is crucial, especially in retail banking: customers are amazingly loath to move to other banks. In essence, this allows banks to charge more for their services than in a more efficient market. Those expensive credit-card charges and overdrafts, and the paltry rates (at best) that banks pay on checking accounts: in a less slothful world such margins would long have been competed away. Internet banks, by offering mouth-watering deals (Britain's Egg is a good example) should be able to take some of this business away, but the point is that in general they will probably do so rather more slowly than most might think.

The second reason for thinking that incumbents will be more successful than newcomers is that they actually know something about banking, although, since many banks have lost spectacularly large amounts in one way or another in the past few years, some might doubt this.

The third reason is that they have lots of capital to throw at e-banking. Although the amount of money now being invested in venture-capital funds means that this is less important than it was, there is, presumably, a limit to how long investors will be willing to tolerate losses on internet banks.

The fourth reason is probably the most important: their brands. The more commoditised a product, the more important it is to have a good brand; it is, after all, almost the only thing that differentiates them from other sellers of similar products. Traditional banks have, in general, more developed brands. Not wonderful ones, to be sure, which is why banks are spending so much more than they did on trying to spruce them up. Although any British bank that claimed that its brand gave it a competitive advantage would be a laughing-stock, this is less the case elsewhere. In Germany, for example, bankers are apparently considered more trustworthy than doctors (though this might say something about the German medical profession). In Japan, despite their unerring ability to get into a bad deal, bankers are still respected if disliked.

Against all this, there are, for many banks, particularly in Europe and Asia, big problems in reacting to the challenges posed by the internet. It is clear that, at the very least, banks will have to adjust the way in which they offer products: less branches and more technology. Unfortunately, this means sacking people, which in most of Europe and Japan is decidedly tricky. But the point still stands: despite the hype, it is too soon to write banks off just yet.

Richard Cookson is banking and markets editor for The Economist, and writes on all manner of things connected with those two areas, including risk management. Previously he wrote for Risk magazine.