The rising tide of bond finance

The rising tide of bond finance

There is a sea change underway in corporate finance, driven by a unique conjunction of powerful economic forces. The phenomenon is a global one, driven by persistent low inflation and the worldwide fall in government borrowing. But it is given an added fillip in the UK by the spectacular turnaround in our own government's finances and, most important of all, by Gordon Brown's radical reform of the UK corporate tax system, the impact of which is still underestimated.

All the finance textbooks tell us that debt is a cheaper way of raising money than equity. Yet the sceptical finance director, comparing dividend yields of around 2.5% with short-term interest rates of over 6%, finds this difficult to understand. He should of course bear in mind that those interest payments are fixed in cash terms, whereas dividends grow over time. Being inherently inflation-proof, dividends should be compared with index-linked gilts. And dividend yields are higher, on average, than those on index-linked gilts.

However, the difference is small and is not the main reason why debt is so attractive in principle. The real benefit of debt finance is that interest payments reduce taxable profits, and hence reduce corporation tax, whereas dividends are part of profits and are effectively taxed at the corporation tax rate. It is a curious system. If money flows out of a company to the capital provider in a box labelled 'Interest', every pound arrives intact, worth 100 pence. But if it travels in a box labelled 'Dividends', the taxman takes 30 pence en route, leaving only 70 pence for the capital provider.

The institutional investors, who own nearly half of all UK equity, used to be fairly indifferent between debt and equity. But that was before the tax system changed. Under the old imputation system of corporation tax, the institutions received a dividend tax credit worth 25 pence on every pound paid to them. The corporation tax of 33 pence in the pound was largely offset by the 25 pence tax credit, so the effective tax rate on distributions was only 8 pence. This increased to 13 pence in 1993 when the tax credit was cut to 20 pence, and leapt to 30 pence last April when the tax credit was abolished.

Dividends now bear the full brunt of the current 30% corporation tax rate. Pension funds looking for income find debt instruments much more tax efficient than equity. Indeed, if the institutions could wave a magic wand and exchange shares for bonds offering the same pre-tax income stream, their post-tax income would rise by 43%. This is why they will put increasing pressure on corporates to issue debt instead of shares.

Debt-financed share buy-backs are one way of doing this that is becoming increasingly common in the US. But they are still comparatively rare in the UK and you don't have to buy back shares to enjoy the benefit of debt. It can be used to finance expansion. This appears to be what UK companies are doing, on an increasing scale.

So what has caused our sceptical finance director to overcome his dislike of debt? It is certainly not the newly enhanced tax advantage of debt finance. The trend towards bond finance pre-dates the new tax regime, which came into force only last April. What has really been driving the sales of corporate debt is a combination of the fall in inflation ­ or more accurately the rise in the market's belief in the sustainability of low inflation ­ and a dramatic turnaround in the government's fiscal position both here and in the US.

The fall in government borrowing is a remarkable feature of the economic landscape. In 1995 the UK government borrowed no less than £39 billion. This year it is set to repay some £6 billion. That represents a potential fall of up to £45 billion in the annual supply of UK gilts. The resulting scarcity has helped to drive their price up and their yield down.

It is that fall in bond yields which has tempted companies back into the bond market. When bond yields were at 10% (which was the case between 1982 and 1992) paying interest looked a lot more expensive than paying dividends, which were then yielding around 5%. The gap nullified the (then small) tax advantages of borrowing. When bond yields started to fall in the 1990s, dividend yields also came down, and the gap hardly narrowed. It is only in the last four years or so, as bond rates have plunged, at the long end, towards 4%, that the gap between the dividend yield and the coupon on debt has really narrowed, as Figure 1 shows.

Another significant feature of the recent past has been the inversion of the yield curve. As the authorities have stopped worrying about recession and started worrying about overheating, short-term rates have risen. But because the market now appears to believe firmly that inflation will not be a problem in the longer term, the rise in three-month and five-year interest rates has not been reflected in the cost of very long-term debt, as Table 1 shows. 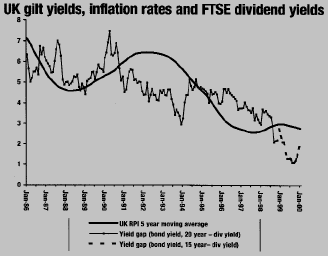 These seismic changes in the economic landscape have triggered the long awaited rebirth of the UK corporate bond market. In the old days corporate treasurers who needed money looked to their bankers first, and to the equity market next. That is now changing. The cost of long-term borrowing via the bond market has fallen relative both to the cost of equity and to the cost of bank borrowing ­ and that is before taking account of tax.

It is the unique combination of a major tax change, together with the profound change in the macro-economic environment documented above which is now making the sharper corporates rethink their financing strategies. The fall in long-term interest rates reflects an increase in the supply of debt available to corporates. The effect of Gordon Brown's stealthy tax hike is to reduce the supply of equity (because the institutions' post-tax return on equity is hit by the abolition of the tax credit on dividend distributions).

As even the most cautious company treasurers re-examine their capital structure in the light of this double whammy, which is unique to the UK, the bond salesmen will have a field day ­ as will those of us whose job it is to advise companies on how much they can safely borrow and how much it should cost.

Bill Robinson is head UK business economist in Financial Advisory Services at PricewaterhouseCoopers. He is a former special adviser to the Chancellor of the Exchequer.