Odd things are happening in corporate America. Anything with even the most tangential relationship to all things techy can raise equity at the sort of price at which investors are almost guaranteed to lose money. Everyone else seems to be buying their shares back. One explanation might be that equity capital is being redistributed from those companies that have little use for the stuff ­ not many good investment opportunities, in other words ­ to those companies in the vanguard of the 'new economy' that have plenty of use for it.

To the extent that investors are indeed offering free equity to companies, this argument has some merit. It is, however, a racing certainty that when the greater fool refuses to stump up, equity investors in Internet start-ups will lose their shirts. Fast-growing companies used to mean fast-growing profits. In the mid-1970s newly listed companies made returns on equity of about 18%. Now they make only 3%, compared with about 11% for the market as a whole. Most lose money and always will ­ for if history teaches us anything, it is that first movers in a technology are usually not the winners, and even if they are, investors in them are not. Be assured that since the Internet is such a potent force in lowering barriers to entry, this will be doubly true this time round. For the time being, though, and contrary to all the evidence, investors are convinced that new economy equals profits.

Irrationality, of course, cuts both ways. To be consistent, investors must also think that profitability in traditional companies is headed for oblivion. Perhaps this is why such companies in the US and elsewhere are buying back their shares at such a giddy pace. To keep up, they have to run increasingly fast ­ otherwise their share prices will fall. Retiring their equity is a splendid way of doing this because earnings per share are, obviously, boosted by having fewer shares; in other words, by changing the denominator. Given that the world of high-techery is so small, it should come as little surprise that, taken as a whole, American companies are buying some 2% of their shares back every year.

And herein lies a problem. On present trends, in 100 years time or thereabouts, corporate America will be financed almost entirely by debt. Perhaps 100 years is rather beyond the average investment time horizon, but still, the issue is an important one now. American and European companies are becoming more leveraged. Share repurchases are often financed with debt.

In America, debt now accounts for getting on for 60% of total capital. Between 1979 and last year the book value of net debt to market capitalisation has increased from 16.4% to 27.9% for America's 50 top companies, according to J.P. Morgan. Taken at market prices, debt to market capitalisation has fallen, but this is probably only because the market cap of the top companies has risen so far (this, you must understand, has nothing to do with a bubble ­ they really are just wonderful companies). For everyone else, the story is very different.

This is rather mysterious. There have always been good arguments for raising debt rather than equity: that interest payments are tax deductible whereas dividends are not, for example. But these have long been true, and they do not explain why companies are becoming more leveraged now. With the Dow, that repository of traditional companies, at such stratospheric levels, it would be stretching a point to say that, in the long run, this had much to do with the dismal value of their shares. Rather, it is because they have been raising more debt to buy back their shares. 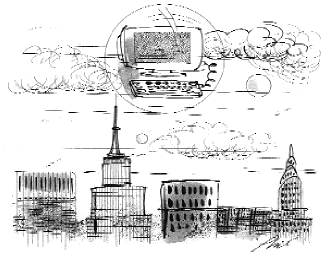 Why might this be? One reason is that, after nine years of expansion, investors have become insensitive to risk (and their love affair with high-techery seems to bear this out). The second reason is that companies' managers have every incentive to leverage their balance sheets as much as possible. That second reason is called stock options. In essence these provide an incentive for managers to sweat as much return from as little equity as possible because then their company's share price will rise. While the good times roll, stock options have created a huge incentive for firms' managers to borrow in order to buy back shares.

There are two very good reasons why this is not in shareholders' long-term interest. The first is that inflation is, at the very least, dormant. Why does this matter? Because debt is the promise to pay back a fixed sum in the future. Inflation erodes the real value of that debt. Much of the post-war era has been inflationary, so debt has been a relatively attractive option for companies. But what if companies can no longer rely on inflation to bail them out? Take the extreme example: deflation. This increases the real cost of debt. Moreover, as prices fall so do returns on assets financed with borrowed money, for companies must repay debts with declining profits. Even if the world is in a disinflationary, rather than a deflationary, era this might still make excess leverage in many industries unwise.

Look, for example, at Japan, an economy which relied on heady growth to sustain huge debts. Slow growth, meagre profits and a disinflationary environment have, for much of this decade, mauled many of the country's apparently best (but hugely leveraged) companies. Nor, because the stock market has languished for almost all of the 1990s, has it been cheap for companies to replace those debts with equity. Uniquely among rich countries, the equity risk premium in Japan has risen.

And this leads to the second reason. In a disinflationary environment in America and Europe, the equity risk premium has fallen sharply. Perhaps that is because a low inflationary environment is a relatively less risky one for equities since profits are less uncertain (though the Japanese experience seems to cast doubt on this). But equities in both Europe and America shares are more than a little generously valued; in America, indeed, they are, on some measures, more expensive than they have ever been. This is, of course, absolutely as it should be: America is clearly in a golden age.

But what if it were not? What if the stock market crashed, pulling domestic demand and America's economy down with it and causing a massive output gap and deflation? Surely many a company would be kicking itself for not having more equity?

Richard Cookson is banking and markets editor for The Economist, and writes on all manner of things connected with those two areas, including risk management.. Previously he wrote for Risk magazine.