The crisis to come

The crisis to come

Since the mid-1970s the English-speaking countries have had more than their fair share of financial crises. In the present decade it has been the turn of Asia to experience a big increase in financial instability. Continental Europe has, by contrast, been a calm oasis in a turbulent world. True, a rash of bad debts in property caused trouble in the early 1990s, especially in France. But on the whole, banks have behaved themselves and bail-outs have been few. Is this all about to change with the arrival of the euro? And are governments and central bankers in Europe up to the task of crisis management?

At the risk of over-generalisation, recent history suggests that highly regulated banking systems are stable, while deregulation tends to upset a delicate systemic balance. For example, in early post-war Britain, as in the rest of Europe, the banking system operated along the lines of a utility, with banks taking deposits from the public and lending the money to industry and commerce. Competition was restrained by a clearing bank cartel and the cultural ethos was essentially bureaucratic. Instability took place in the foreign exchange market rather than in banking, with sterling showing endemic weakness.

Liberalisation of the clearing bank system in the early 1970s then unleashed powerful competitive forces. In a loose monetary policy framework, banks over-extended themselves, notably in property. By mid-decade the authorities were forced to launch a lifeboat for troubled banks to prevent contagion into the upper reaches of the system.

A similar pattern has been perceptible elsewhere. When the Japanese Ministry of Finance ceased to provide administrative guidance on credit allocation to hitherto tightly regulated banks in the 1980s, poor credit judgements led to bad lending in property and elsewhere. The US, meanwhile, conforms marginally less well to this schema. Excessive lending to Latin America in the 1970s and early 1980s was, in part, an attempt to escape from excessive regulation in the home market. The savings and loan debacle, on the other hand, was a direct consequence of ill-judged deregulation. The Reagan administration encouraged the S & Ls to trade their way out of solvency problems ­ a disastrous precedent that was followed, with all too similar consequences, by the Japanese government in the 1990s.

Against that background, the striking feature of continental European banking is the survival of a highly regulated environment well into the present decade. Capital markets have been under-developed and banks have continued to play a disproportionate role in financial intermediation. But now, with the development of the single market and the arrival of the euro, financial institutions are experiencing a profound shock from liberalisation. All instinct suggests that an upheaval on this scale will cause some banks to founder, with potential systemic implications. 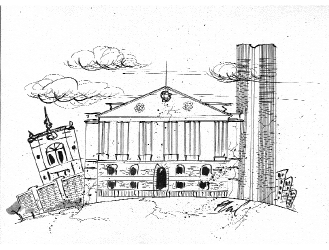 How could this arise? A pan-European banking market is, in one sense, less vulnerable than the purely national markets that existed beforehand. The collapse of an Irish bank, for example, is unlikely to pose a systemic threat for the eurozone as a whole. That said, deregulation usually leads to a profits crunch, so many banks will be less sound than hitherto. The Bank for International Settlements worries that banks may also be tempted to restore profitability by taking on higher-risk business. This would lead to a general weakening of bank balance sheets.

Moreover, many continental banks, with encouragement from their governments, are bent on domestic acquisitions and mergers with a view to becoming national champions capable of taking on the international competition. The institutions that emerge from this domestic consolidation may come to be considered too big to fail on a European basis. Certainly, greater cross-border activity will increase the scope for contagion. So, too, will the collapse of barriers between banking, securities and insurance.

The biggest trouble seems likely to arise where enlarged financial institutions conduct more of their business outside their own country than within. European Union supervision is based on the principle of home-country control. Internationalisation will make the home-country supervisor's job harder on a consolidated basis. Meanwhile, host-country supervisors will not be the primary recipient of information about difficulties at a foreign supervised bank on their own territory. The ability to detect nascent systemic problems will thus depend on the exchange of information and broader co-operation among national supervisors.

Multilateral bodies exist to foster such an exchange. But they are inherently bureaucratic. And in financial crises flexibility is at a premium. Such flexibility will inevitably be hard to achieve when different languages and national rivalries are present.

When it comes to the lender of last resort function, the new European Central Bank (ECB) has no legal powers to act. Banking supervision is still under the control of national authorities. The somewhat ambiguous provisions of the Maastricht Treaty may give the ECB power to sanction the provision liquidity to troubled institutions by national central banks. But that requires a relatively free flow of information from national banks to the ECB. At present there is no automatic or systematic ECB right to data of this kind. And there will be large conflicts of interest between the various authorities involved.

It is not difficult to envisage circumstances where a small home-country government will be reluctant to bail out a bank where the majority of the balance sheet lies abroad. Domestic politics would militate against the use of taxpayers' money to rescue mainly foreign depositors. And a bail-out might also lead to a breach of the Maastricht fiscal criteria. In place of the 'too big to fail' syndrome, we may have a new 'too big to save' problem.

Bank supervisors argue that they have all these difficulties in hand. A separation between monetary policymaking and banking supervision has anyway been a feature of many eurozone countries in the past. But with such profound and rapid change in both the institutional and market structures of European finance, the challenge for those in charge of risk management and internal control in commercial banks is huge, as is the challenge for supervision. If the eurozone escapes a financial crisis in the decade ahead it will be a remarkable achievement on the part of all concerned.

John Plender writes for the Financial Times. He is also chairman of Pensions & Investment Research Consultants, which advises institutional investors on corporate governance, and a member of the steering group of the government's Company Law Review.