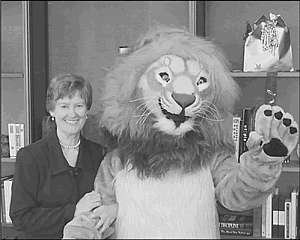 TBL: What do you consider your greatest achievement?

Conwell: I always think most achievements are extensions of, or are built upon, the work of one’s predecessors. That certainly is true in my case. There are three accomplishments that come immediately to mind.

The first is the Borough Advocacy Network, which builds on work done at The New York Public Library during the fiscal crisis of the 1970s. During that crisis, my predecessors created an advocacy initiative that involved staff working with individual library supporters and community agencies to invite local legislators into our branches, mount letter-writing campaigns, advocate at the State level in Albany, and speak at budget hearings at City Hall. The Borough Advocacy Network simply harnesses the strength of our supporters and volunteers in a more formal way. We now meet with them twice a year and communicate with them through e-mails and a newsletter, which is modeled on one that used to be done by a former director. The most recent result of this advocacy has been a roll-back in proposed City budget cuts and an additional sum to help us start building back from previous cuts.

The second is what we have come to call our building “spruce-up” program. In a system of our size (85 branches), we have achieved much return on investment by using modest sums of operating funds, along with some private or grant funding, to deal with deferred maintenance and to reorganize and freshen up our branches. This program complements full renovations that are funded by the City’s Capital Budget. Currently, 26 branches have undergone spruce-ups. Beyond the bang for the buck, we have learned lessons about managing smooth closedowns of branches; how and when to exercise the option of providing a temporary site; and how a clean, updated, welcoming environment attracts more patrons. After the spruce-up at our Mosholu Branch in the Bronx, for example, circulation went up 32 percent (compared to a 25 percent increase system-wide), and attendance increased by 21 percent (compared to a 14 percent increase system-wide).

Finally, we have just celebrated centennials of the first three branches built with funds donated to the City of New York by Andrew Carnegie. The Yorkville Branch, in Manhattan’s East 70s, was the first to celebrate its centennial in 2002. This was followed by Chatham Square in Chinatown and 125th Street in East Harlem. There will be 26 more celebrations between now and 2029, including Tottenville on Staten Island and Tompkins Square on the Lower East Side, both at the end of this year. We have designed a template for all the celebrations, including a brochure on the Carnegie branches and a framed copy of the original Carnegie letter of agreement that we hang in each branch. These celebrations are particularly dear to my heart since I love the history of the Library and of New York City. The celebrations highlight the fact that libraries, and their financial benefactors, make an investment in communities that lasts for generations.

TBL: What were your challenges in your current position?

Conwell: After working in various positions in the Library for 35 years, I became Director just before September 11, 2001. As tragic and difficult as that was, I was never as proud of the Library as I was on September 12th when we had every branch we could reach open for service. Also on that day, our Community Information Services staff immediately went into high gear to produce a Web site of sources to which people could go for essential information and to offer assistance. We titled the site NYPL Responds, and it really became the “go to” source, not only for New Yorkers, but also for the other two library systems, and for many other organizations, locally, nationally and internationally. Our branches themselves became oases and gathering places for neighborhood residents who wanted to communicate with relatives via e-mail, seek information about what had happened, attend programs, or simply be with other people in a familiar and comforting setting.

At this very challenging time, we also were being pushed to downsize our administrative structure. I felt that if we didn’t make this management change ourselves, someone else would come in and make it for us. So, an extended group of Branch Libraries managers took on the task of analyzing ourselves. Three of our staff members, who have Masters of Public Administration degrees along with their MLS degrees, and our resident “statistical” librarian were particularly helpful, and we got as much input as we could get from staff in general. We came up with a change plan called Customers First, through which we transferred many office staff members to public service units, consolidated 14 regions into 10 districts, centralized collection development, and formed various teams to focus on particular service areas. One of our teams, for example, works closely with schools.

TBL: Who are your heroes in real life?

Conwell: I was fortunate to be able to work under and learn from two of the best library leaders: Edwin Holmgren and Bernice MacDonald, who were Director and Deputy Director of The Branch Libraries for some 25 years. Almost everything I know about leadership and managing a library comes from them.

TBL: What were you able to accomplish due to grants and additional funding to your library?

Conwell: An exciting foundation-funded project, which we named “Click-on @ the Library,” offers free computer classes to the public. While the private funds will be phased out by December of 2004, this program has been so successful that we can’t, and don’t want to, discontinue it. Many of our staff members are becoming accomplished trainers, public demand is high, and we have more and more capacity to provide wireless technology. So, from “Basic Internet” to “File Management,” this service is becoming a part of our everyday lives (www.nypl.org/classes/branchclasses.cfm).

Private funding for our consumer health program, CHOICES (www.nypl.org/branch/choices/), also ends in December 2004. CHOICES provides enhanced reference assistance and access to current and authoritative sources of health information at all branch locations. This essential work has been integrated into our regular services under the leadership of staff at the Mid-Manhattan Health Information Center and is another example of how private funds can help us focus on a new service or start us in a new direction that becomes an integral part of what we do.

Recently, The Wallace Foundation announced a grant, Learning in Libraries, to the three library systems in New York City to support and expand core programs that help libraries serve as learning places for kids during their out-of-school time. With this grant, NYPL will be able to supplement funds for summer reading programs; offer staff management training; provide enrichment programs for kids; hire evaluation consultants to study the effectiveness of our staff training and pilot programs; mount a Homework Help Web site; and much more. Our challenge is to build in the capacity to sustain these programs in the future when additional funds are no longer available.

TBL: How do you see the funding mix for public libraries shifting? How have you worked with all levels of government as your pieces of the pie grow and/or diminish?

Conwell: After September 11th, New York City was immediately hit with budget cuts. In some ways, we were better prepared to handle them than in the past. Many of us had previous experience with such cuts, we had newly developed workload measures to assist us with decisions, and we had the results of user surveys, such as the one done for us by Baruch Professor, David Birdsell. The results of the cuts, while devastating, were at least as equitably distributed as we could make them. And, the advocacy initiatives that were designed in the 1970s to work with all levels of government still serve us well today.

In addition, our Board of Trustees mounted an unprecedented Emergency Campaign to raise $12 million in private funds for the Branch Libraries over a three-year period, primarily to protect the Library’s collections from such devastating cuts. The campaign is turning out to be a resounding success, and the grass roots part of the effort, called Take Out/Give Back, has raised over $70,000 to date!

TBL: Given the opportunity, how have you resolved any Internet access conundrums?

Conwell: In order to continue receiving certain federal funding, the Library is required to comply with the Children’s Internet Protection Act (CIPA) regarding filtering of all Internet-accessible computers. Under such programs as E-Rate and LSTA, our system requests as much as $14 million per year, although the final amount the Library receives varies drastically from year to year. After nearly a decade of providing unfiltered access with very few problems, the Trustees of the Library opted to install filters in order to protect this funding. An internal committee worked very hard to select the least burdensome approach for staff and users in order to maintain our patron’s First Amendment rights. An excellent resource regarding CIPA may be found at (www.nypl.org/pr/pubuse.cfm).

TBL: How important are digitization projects to your organization, and how did you allocate funds to undertake this initiative?

Conwell: We sought and received a grant from the Institute for Museum and Library Services in 2000 to begin digitizing our Picture Collection. This collection was established in 1914 in response to the demand for images created by the rise of visually oriented enterprises such as graphic arts publishing, filmmaking, theater, advertising, and the fashion industry. Since its inception, the Picture Collection has remained a key source of visual information and inspiration to New York’s large cultural and educational communities and, therefore, has been a significant contributor to the City’s economic health. By providing free access to more than 30,000 images, the Picture Collection Online (http://digital.nypl.org/mmpco/) has broadened its user base from New York City to the global community.

TBL: What do you think libraries can do/offer to make better funding of libraries a higher priority in our society?

Conwell: The recently released National Endowment for the Arts survey, Reading At Risk, A Survey of Literary Reading in America, calls attention to the downward trend in book consumption by Americans and the correlation between readers of literature and those who are socially and civically engaged. Adequately funded libraries are an obvious place where citizens can not only find informational sources and recreational reading but also come together for discourse on issues important to our society.

TBL: Are library schools doing enough to prepare librarians? How is your library training librarians?

Conwell: New York City is fortunate to have a number of library schools within the metropolitan area. Many of the students in these schools already work in the City’s libraries. At NYPL, we call these staff members “trainees” and provide them with scholarship support as well as internal training opportunities. We have also established a mentoring program for newly-hired staff, designed to last for the first two years of employment. Additionally, our Customers First change plan included a look at and reorganization of our well-established and highly regarded staff training program. On the recommendation of a consultant, we hired a training coordinator, worked on a better balance between centralized and local training, and designed a new two-tiered approach to teaching supervisory and management skills to new librarians. We also sought new training opportunities for our top level field managers and received a grant to provide customer service training for all staff. Overall, library schools provide a good framework for a new librarian, but employers need to continually offer staff development opportunities.

TBL: If you had the opportunity to do it all over again, would you still choose a career in this profession? Why or why not?

Conwell: I wrote a letter to my parents in May of 1967, just nine months after I started with the Library. In it I said, “I wonder at my good fortune – just happening to choose librarianship and NYPL.” I still feel that way today. I hope others just starting out in the profession will be lucky enough to be able to say that at the end of their careers.