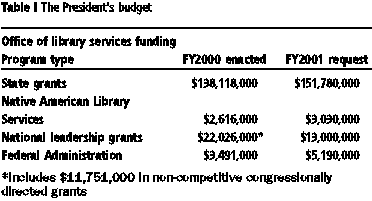 The budget request for IMLS has two major goals, which will be addressed through museum programs, library programs and collaborations between museums and libraries:

IMLS will collaborate with the National Science Foundation to provide linkages among digital library and museum resources for all Americans. IMLS grants to states support library services in every state, the District of Columbia and US territories, based on a five-year plan developed by the state and tailored to its individual needs that addresses the goals of using technology to expand access to information and service to those who may have difficulty using the library. National Leadership Grants enhance the quality of library services nationwide, improve access to information resources, and encourage collaboration between museums and libraries. Grants focus on education and training in library and information science; research in library and information science and demonstration projects; preservation or digitization of unique resources; and museum/library collaboration.

Other increases proposed in the FY2001 budget are $1,495,000 for the National Commission on Libraries and Information Science; an increase of $25 million for the Technology Literacy Challenge Fund, bringing the total request to $450 million; and an increase from $312.5 million to $1 billion for Community Technology Centers, which makes grants to public housing facilities, community centers, libraries and other community facilities to make educational technology available to residents of low-income and rural communities. The National Agricultural Library would receive a $2 million increase over FY2000, bringing the total from $19 to $21 million, and an additional $1.7 million is requested for renovation of the building.

As part of the Clinton-Gore administration's ongoing efforts to close the gap between Americans with access and those without access to new technologies and tools needed for economic success and advancement, the commerce department will award approximately $12.5 million in a new round of grants. Commerce Secretary William M. Daley noted that more than one-third of US growth stems from information technology industries. "access and training, therefore, become even more essential so that all Americans have the ability to participate and benefit from the new economy".

This grant program, formerly known as the telecommunications and information infrastructure assistance program (TIIAP), has been renamed the technology opportunities program (TOP) to better reflect the possibilities that new technologies present for economic advancement. The grants will be awarded to state, local, and tribal governments and to nonprofit entities. The administration hopes with these grants to extend the benefits of the Internet and other information technologies to everyone, especially those in underserved rural and urban communities. The grants will help to give disadvantaged populations, low-income persons, and the less educated access to information sources. This current set of grants is specifically encouraging projects developed by smaller, locally-based organizations projects involving partnerships among its four application areas - community networking and services; lifelong learning and the arts; health; and public safety.

In July 1999, the national telecommunications and information administration (NTIA), which administers the grant program, released findings of a major study that reported the gap between American information "haves" and "have nots" has widened significantly. Daley planned a 12-city tour for February to raise public awareness of the inequity. NTIA scheduled free regional technical assistance workshops for January and February to discuss the TOP funding priorities, application requirements, and lessons learned from previous TOP grantees. Since TOP started in 1994, it has provided more than $135 million in matching grants.