A subcontract supplier of precision turned parts to the aerospace industry and other sectors, Techno Group comprises two sister companies in Rugby and Hastings owned by Fred Moser and run by skilled management teams. Both companies can trace their roots back to large volume manufacture of turned parts on cam automatics going back to the 1970s. Having moved into computer controlled turning in the mid-1980s, they finally disposed of all their cam auto’s by the late 1990s, having replaced them with nearly 40 multi-axis CNC sliding-head and fixed-head mill/turning machines.

Both companies adopt a continuous improvement policy with regard to machinery purchases and are constantly upgrading to ensure that they stay up to date with the latest manufacturing technologies. Each company is progressing along similar lines. Common themes at both sites include accreditation to AS9100 aerospace quality management standard; the introduction, implementation and embedding of lean manufacturing practices; and the use of production management software, moving towards real-time machine monitoring and data capture to enable management teams at each site constantly to monitor key performance indicators and compare data common to both sites.

As part of the group growth strategy, Techno Group is increasing its prismatic machining capability, above that currently available using the driven tools on its turning machines, to include three-, four- and eventually five-axis machining centre capability.

Another management principle adopted at both sites is empowerment, training and internal promotion of staff at all levels. Kevan Kane, currently general manager at the group’s administrative headquarters, Rugby-based Technoset, takes on the role of Technoset managing director as from the beginning of April 2008. David McIlwain who started with Technoset in 1978, has been MD at Technoturn Hastings since the beginning of operations there in 1995 (Figure 1). 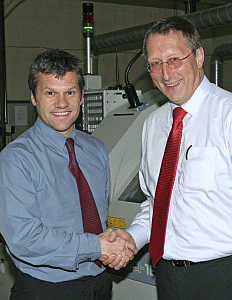 Figure 1 Kevan Kane (left) being congratulated on his appointment as Managing Director of Technoset by owner, Fred Moser

There, a team of four has been given responsibility for implementing lean manufacturing practices under training and guidance from the Manufacturing Advisory Service (MAS). project leader is Phillip Palmer, in his 11th year with the company, who is co-ordinating the problem-solving initiatives with management and shop floor staff and is responsible for internal reporting.

Initiatives have included revamping the storage of tooling and inspection equipment to save time and increase efficiency; and progressively extending periods of unmanned machining. Communication of intent and results with others in the factory has been enhanced by the simple measure of a redesigned screen saver on everyone’s PC giving up to date information.

So, successful have these measures been that Technoturn received from MAS the “2007 Best Practice Award” out of the 14 companies in the South East regional cluster.

In another example of personal development, apprentice Grant Seymore will be broadening his experience on a four-week exchange with Joe Whiteside, an apprentice at Star Micronics in Melbourne, Derbyshire. The company has supplied 10 of the 16 CNC sliding-head mill-turn centres in operation at Technoturn as well as six of the 11 sliding-head machines in service at Technoset (Figures 2-6). 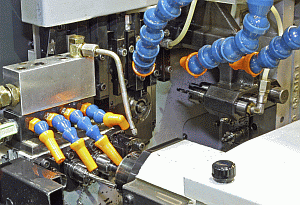 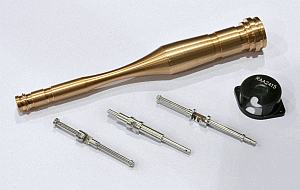 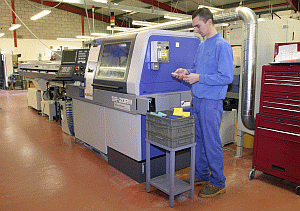 Figure 4 This Star SR-20RIII sliding-head lathe at Technoturn (with the latest FMB 3-36 bar magazine) and the SR-20RII immediately behind, have both been equipped with high-pressure coolant delivery, according to Machine Shop Manager, Gary Harrison (pictured) 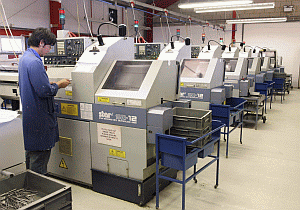 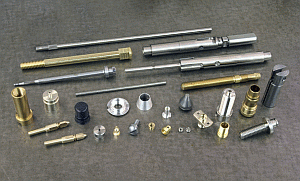 Figure 6 A selection of components mill-turned by Technoturn on its 16 sliding-headstock lathes, which include ten models from Star

Both companies also operate around half a dozen fixed-head lathes apiece for turning parts larger than 32 mm (the maximum capacity of sliding-head machines), all of them highly specified and with sub spindle, Y-axes and driven tooling. Technoset undertakes fixed-head bar work up to 65 mm diameter while Technoturn’s 51 mm bar capacity is increased by chucking of parts and billets up to 75 mm diameter.

Over 80 per cent of Technoset’s turnover derives from aerospace contracts. Accordingly, the company is building on its AS9100 credentials by working towards the Society of British Aircraft Company’s SC21 accreditation, a supply chain improvement programme for raising competitiveness in the aerospace and defence industries. With 7,000 subcontract suppliers in existence serving the UK aerospace sector, it is unsurprising that the society is striving for standardisation to maximise OTIF (on time in full) deliveries. The next challenge for Technoset will be to achieve six sigma.

Much of the work that the company undertakes is in free-issue, difficult to-machine materials such as S80 and S130 stainless steels, titanium, Inconel, Monel and many others. Some contracts require extremely tight tolerances of a few microns. One recent job put on a Star SR-10J required a component to be produced measuring 230 μm in diameter, +5 μm, −0. Mr Kane feels that they could hold even better than that, but such accuracies are difficult to measure outside a temperature-controlled environment.

Commented Mr Moser, “We are finding that aerospace customers are asking us to hold ever tighter limits, a request that we think is being driven by the need to manufacture more efficient, eco-friendly and quieter aircraft. We are also being asked to facilitate easier and simpler assembly of components and sub systems with other parts arriving from different sources and suppliers, which follows from the ever increasing globalisation of the supply chain.”

“The volume of work coming in is increasing all the time, as more and more people want to travel by air, including those in the BRIC (Brazil, Russia, India, China) and emerging Eastern European nations as their prosperity grows.”

He went on to say that the combined requirement for greater component complexity, higher accuracy, smaller volumes (typically 50- to 2,000-off) and faster deliveries all point towards the need for top-end, highly capable and reliable machine tools which the Star machines can provide. A majority of them at Rugby are fitted with high-pressure coolant delivery and swarf management to cope with the difficult materials machined and the need to keep the working area free from chips to maintain high-precision cutting.

Technoset adopts a policy of replacing machines regularly to upgrade the plant list and so take advantage of the latest innovations in machine capability and speed. Mr Moser suggests that modern CNC sliding-head lathes are around 25 per cent more productive than they were a decade ago.

He cited one of Star’s latest machines, an SR-10J, that shows this level of improvement over a model of similar capacity purchased in 1997 that has recently been replaced. In-cut time is broadly similar, although cutting tool advances have helped, but it is the 35 m/min rapids of the new machine that has lead to big savings in non-cutting times.

Owing to the complexity of the work and high value of the materials machined, there is little unattended running at Rugby, although advantage is taken of a ghost shift in the evenings whenever possible. A lot of use is made of in-process inspection and monitoring of parts and tools, as well as post inspection with statistical process control.

Unlike low-wage economies where labour is cheap, subcontractors in the UK have to produce parts automatically in one hit, right first time to be competitive. This is certainly the case at Technoset, which has seen the number of people employed for second-operations drop five-fold from 15 in the late 1990s to three this year.

Mr Kane commented that they put any part under 32 mm diameter onto their sliding-head lathes, even components that are shorter than their diameter, as they can generally be produced more quickly than on a fixed-head machine. Such is the versatility of sliding-head technology and its driven tooling capability that sometimes there is little or no turning required but a considerable amount of prismatic machining.

Technoset uses a range of sliding-head machines from different suppliers. Cost, though important, is not the main driver. It is the subcontractor’s policy to buy what it considers to be the best machine available for the applications that it has in mind for any new machine, and is aware that the various manufacturers are ahead in certain categories of machine at different times.

As a general comment about Star machines, however, Mr Moser believes that their strong points are capability, reliability – the subcontractor rarely has to call out a service engineer – and build quality. The latter translates into effortless, consistent, high-precision machining of tough and difficult-to-machine materials. Moreover, residual values are strong and there is a ready aftermarket when the time comes to sell on a machine for a newer, even more capable and productive model.

The range of contracts fulfilled by Technoturn is somewhat different, as only around a third is aerospace related. That is boosted, however, by a proportion of the connectors and fasteners it manufactures, which account for another third of output, going into the aerospace sector.

The remainder is general, high-quality commercial work. Batch size varies enormously from two- to two million-off and again, one-hit production is the norm, but at this site it continues around the clock, 7 days a week.

Some exotic materials such as nickel-silver and aluminium-bronze are machined and a third of throughput is stainless steel, but a wide range of more usual materials forms the remainder including brass, mild steel and aluminium.

Both Techno Group companies take environmental issues seriously, but at Technoturn, Mr McIlwain and the management team has taken a step ahead with the installation of a machine for spinning oil off the swarf. The oil is filtered and reused while the swarf, which is worth more in its de-oiled state, can be transported without leaking over the yard and elsewhere.

In addition, instead of using 200 l of trichloroethylene every month to clean its components, both companies have invested in cleaning and degreasing plants that consume just 250 l of iso-paraffin in a year, resulting in cleaner components and eliminating the use of expensive ozone-depleting solvents with their associated health and safety and disposal issues.

Drawing tolerances are generally more open at the Hastings company than at Technoset, so Mr McIlwain has a different approach to the operation of his turning machines. Long running jobs go onto any available machine, as cycle time does not vary much from model to model. In any case, he is more interested in on-time delivery to customers than in ratcheting up feeds and speeds to shave off the odd second and risk delaying a job and creating scrap.

Upgrading of the machines, although important, is not a priority either. The first CNC sliding-head lathe on the shop floor, a Star SA-16, is still in regular use despite having been installed ten years ago, although most of the plant is much younger than that. Commented Mr McIlwain, “We clean, oil and maintain all of our machines regularly, which is why we get long service out of them and parts of consistently good quality.”

The older machines are reserved for less-exacting contracts, such as turning a mild steel shaft for an ice cream scoop manufacturer in the UK which supplies them to the USA. This long-running job is an example of a contract that has been won back from China. Putting lower tolerance work with smaller profit margins onto a lathe that has long-since paid for itself makes financial sense and leaves the newer models free for machining higher quality components.

According to Mr Moser, the future for the Techno Group is continued growth, both organically at both sites and by acquisition when suitable opportunities arise. Expansion is already under way at Technoturn, where the 8,000 ft2 premises has been increased by 50 per cent by moving into the adjacent unit on the Churchfields Industrial Estate.

Initially, it will accommodate the company’s existing Daewoo Mynx VMC and a second, high-speed, twin-pallet Brother machining centre that will be delivered in April, immediately after the MACH 2008 exhibition where it will be on show. However, eventually the facility will be used to develop and improve the company’s milling and turning capabilities together with any other processes that become necessary to improve its customer service and satisfy the requirements of its growing and ever more demanding customer base.