Noise levels inside modern aircraft are relatively low because engines, the main source of external noise in flight, have become much quieter and the insulation and sound proofing materials in the cabin wall generally work quite well in damping noise.

There is, however, still room for improvement. The distinct frequency peaks of the “buzz saw” noise coming from the engine fans during take-off and climb can still be annoying for the passenger and the broadband noise from the “engines” exhaust and from the air streaming along the skin of the aircraft causes unpleasant sound levels during cruise.

Noise from the outside is transmitted as vibrations through the cabin structure, which consists mainly of the outer skin and frames, a glass wool thermal insulation layer and the trim panels. These plastic linings radiate the sound waves into the cabin. While noise in the frequency range above 500Hz is damped quite well, adding more sound proofing material to prevent the low- frequency buzz saw and broadband noise from reaching the passengers is not a viable option, because too much weight and bulk would be required.

The approach of the acoustics researchers at the EADS CRC in Ottobrunn and Suresnes therefore is to convert the trim panels into anti-noise elements by taking advantage of the effects of destructive wave interference. Since all noise-induced vibrations are waves with peaks and valleys, noise can be suppressed by creating additional waves in an opposite phase. Peaks and valleys thus add up to zero and cancel each other out. Technically, this is done by sensing the structural vibrations with acceleration sensors and, at the same time, by counter-vibrating the panels with suitable actuators, which results in reduced sound radiation.

Researchers at the CRC designed and built such actuators using the piezo- electric effect of certain ceramic materials. Just as bi-metallic switches bend when they are subjected to a change in temperature, piezo-ceramics bend when stimulated with an electrical current. While the resulting movement is small, piezo-actuators move instantaneously and fast and are thus able to create vibrations with the desired frequencies.

The acoustics specialists of the CRC in France and Germany cooperate closely in this project, while developing their different solutions in noise reduction work. This work is carried out and funded partly within the FACE project (Friendly Aircraft Cabin Environment) under the Technology Platform of the European Community's 5th Framework Programme.

“One solution to make the trim panels vibrate is to use active suspension elements, which replace the conventional, passive mounts attaching the panels to the fuselage structure. Every active element incorporates three actuator units and three acceleration sensors, an electrical power supply and the connection to a digital processor. Using the vibration data from the accelerometers in the suspension elements and on the trim panels themselves, the control unit calculates and sends the noise-canceling response to the actuators” acoustics expert Stephan Tewes (Figure 1) explains.The other solution is to integrate several piezo- actuators inside the panels' honeycomb sandwich structure during manufacturing. With acceleration sensors on the panels and with the actuators driven by control electronics, the noise transmissions are minimized with the counter-vibrations induced by local flexing of the trim panels. 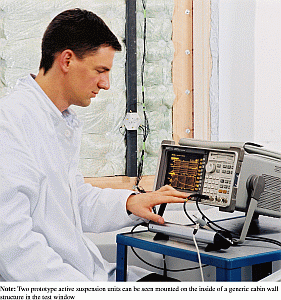 After extensive analysis and numerical simulations, “proof-of-concept” active suspensions and panels were built and tested in the CRC's acoustics laboratory in Ottobrunn. Specimens were fitted to a generic fuselage section in a window between the reverberation room (representing the outside), where powerful loudspeakers emit specific noise frequencies, and the anechoic room (representing the cabin side), where the remaining noise transmitted through the test panels was measured with an intensity probe. The effectiveness of reducing noise transmission by active panels and suspensions was so assessed, with both concepts providing good results. Reductions in radiated sound power of up to 20dB (down to 1 per cent of the initial level) for discrete frequencies and 10dB (down to 10 per cent) for broadband noises were measured.

“Active panels and active suspensions will be combined in our upcoming tests with more realistic structures and this combination could well result in an even better noise reduction” says researcher BenoiÃt Petitjean. “We are aiming for the best scientific solution, but we also consider low costs and meet all environmental, health and safety regulations” he adds.

Advancing from the proof-of-concept stage, researchers are presently in the process of assembling larger wall structure test sections made of carbon- fibre composites. Still within the FACE project, active suspension elements as well as curved active trim panels are going to be tested in the acoustics laboratory this year.