Scottish subcontractor Qualtronic has, historically, derived 80 per cent of its turnover from aerospace contracts, primarily the production of microwave transmission components, connector bodies, cable terminations and other instrumentation. Operations have involved three- and four-axis prismatic machining on Matsuura machining centres and multi-axis mill-turning on a variety of lathes.

In February 2004, the firm's stand at the Southern Manufacturing show, Thorpe Park, attracted the attention of a global supplier of mechanical and control products to many industries including the civil aircraft sector. Impressed with the sample components on display and with the knowledge of the engineers staffing the stand, the company placed a large order for stainless steel parts to go into a new passenger aircraft. One of the components needed five-axis machining to produce it economically.

A year previously, the Glenrothes subcontractor had bought a Nikken two-axis rotary/tilting table for its Matsuura MC-510VG three-axis vertical machining centre (VMC) to enable it to carry out close-tolerance, five-axis machining of various parts, so it was able to use this facility for the new aerospace application. 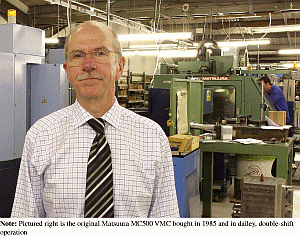 Said Qualtronic's Managing Director, Adrian Harper (Figure 4) who co- founded the company in 1984, “Matsuura applications engineers helped us to reduce the cycle time and tooling costs when machining these components by identifying improvements to the cutting cycles.”

“For example, what was being carried out in simultaneous 4-axis mode is now machined by interpolating the other rotary axis on the Nikken table as well. This makes it possible to tilt the component to allow access for a different cutter to perform more aggressive roughing, so the delicate mill is now required for only the finishing pass.”

Production of the components will increase significantly in 2008 and it was recognised some time ago that there would not be enough capacity on the firm's one five-axis facility. So in December 2007, a full five-axis Matsuura MAM72-25V twin-pallet VMC was installed to take over some of the machining (Figure 5). 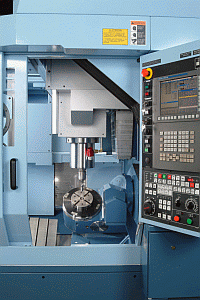 Significant advantages result from using the full five-axis machine rather than the MC-510VG with add-on compound table, despite the remarkable accuracies obtained with the latter configuration. The new machine has enabled improved surface finish to be achieved on certain features of the aerospace components and reduced overall cycle time by 40 per cent. This has been possible owing to the greater rigidity of the more modern machine, which allows full use to be made of the higher power, 15,000rpm spindle and the faster feed rates, both in cut and during rapid traverse.

At the same time, Matsuura applications engineers made a further improvement in the way that the five CNC axes are interpolated to allow a greater area of one of the cutters to contact the component, doubling the life of the consumable. Furthermore, the same cutter is now used to mill features that previously required a separate cutter, so one tool change has been eliminated from the cycle. A machine-mounted probe checks critical features before it leaves the fixture and every second component undergoes a functional check.

Now that the full five-axis Matsuura VMC is installed, other components will be manufactured under contracts that the subcontractor would have had to turn away before. One is the production of a surgical instrument for performing tracheostomies. The 316 stainless steel assembly contains around 30 parts, including a complex camera head and another component that can only be produced in one hit by five-axis interpolative machining.

Other jobs lined up for the new machine are destined for the offshore sector, which need relatively small parts machined from difficult materials.

Mr Harper sets great store by investing in the best quality plant, as he finds that customers will pay a premium for the high-precision components that can be machined. “Many subcontractors walk away from such close tolerance work and that is when we step in,” he said.

“But if you win that type of contract, you don't want to be worrying about the repeatability of your machine tools chasing microns is difficult enough so we always buy the best equipment available.”

Qualtronic now uses six Matsuura machining centres to the exclusion of all other makes. The oldest, an MC500 VMC, was installed in 1985 and is still in full production, despite having been in continuous use, 18h a day. The machine has stopped for unscheduled maintenance only five times in 22 years.

“We would be very unlikely to go elsewhere for prismatic metalcutting machines,” continued Mr Harper. “Matsuura machining centres (Figure 6) are in the top category for quality and accuracy, but just as important is the quality of back-up we receive.” 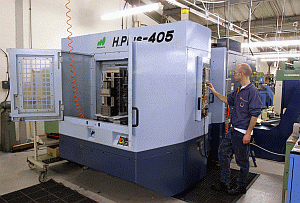 “The supplier is streets ahead of all other machine tool vendors we have dealt with over the last 20 years in terms of the service provided, be it routine maintenance, emergency call-out, training, applications or spares.”

“Even a replacement spindle for any of our machining centres is available ex-stock from Matsuura's Leicestershire headquarters and can be with us the same day.”

The trend over the coming years at the Glenrothes subcontractor will be to replace three- with five-axis machining centres. The rationale is that a greater variety of higher-added value work can be undertaken in fewer set-ups, which also improves component accuracy by reducing tolerance build-up. In addition, it means that fewer spindles are needed overall, minimising manual intervention and lowering labour costs.

Qualtronic moved locally to its current premises in May 2007, in so doing increasing factory space by a third to 20,000ft2. It has an enviable record for customer service, with 99.8 per cent of its 25 monthly deliveries correct and on time. It has the engineering expertise to help customers develop their designs to simplify manufacture, is strong in traditional shop floor skills and has a particularly stable workforce, three staff having been with the company for more than 20 years.