Cheltenham subcontractor, Pharma Tooling, which until the middle of 2007 could prismatically machine parts up to 750mm long in one clamping, has more than doubled its maximum component size capacity with the purchase of a new Hurco VMX64 vertical machining centre (Figure 1). It was supplied with a rotary turntable and high-pressure coolant delivery through the BT40 spindle. 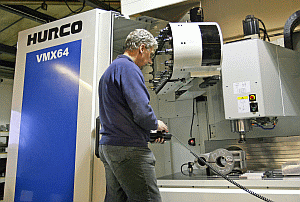 Said Owner and Managing Director, Phil Vines, “My plan is to grow the business and to do that, we have to be able to take on anything that comes through the door, 24 hours a day.”

“We can now machine bigger components within the Hurco's working envelope of over 1,600 x 850 x 750mm, and we also have the flexibility to produce smaller parts by setting up two or even three together on the table, using the 4th axis if required.”

“Additionally, the 18kW high-torque spindle and availability of through-tool coolant means that we can efficiently cut stainless steels including Duplex, as well as other tough alloys, which we are doing increasingly for customers in the offshore and other industries.”

Around one-third of Pharma Tooling's business is pharmaceutical- related. Blister pack tooling is regular work, which involves machining a 1.6m long, aluminium bedway that joins the forming and sealing sections in the production line. The bedway is now machined in one hit on the Hurco, rather than in two clampings as previously.

Aerospace work accounts for another third of turnover and is currently a particular focus for Pharma Tooling, which was granted AS9001 approval during 2007. The company is a member of the West of England Aerospace Forum and follows current good manufacturing practice guidelines throughout all stages of design and manufacture.

The Society of British Aerospace Companies has recently trained the subcontractor's 16 staff in lean manufacturing and capacity planning. The company is aiming to become a signatory to SC21, which is designed to accelerate the competitiveness of the aerospace and defence industry by raising the performance of its supply chains.

Most of the work put on the VMX64 so far has been either prototypes or small batches of 1- and 2-off. Some dimensional tolerances, especially for medical and aerospace applications, are tight at ^0.05mm, a level of accuracy that Renishaw component and tool probing helps to maintain.

All jobs for the Hurco are programmed on the shop floor. The ease and speed with which this is carried out using the proprietary Ultimax twin-screen control system was one of the principal reasons for Mr Vines selecting this machine tool manufacturer. With small batch work, fast turnaround is of the essence to ensure profitability. A 24h lead time from order to delivery is not unusual, particularly for pharmaceutical components (Figures 2 and 3). 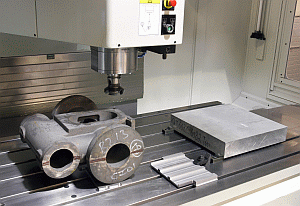 Figure 2 The components on the VMX64 table are (left) a cast iron valve for the oil industry, (right) an aluminium bed for the same contract, and (centre) a small aluminium part for another customer 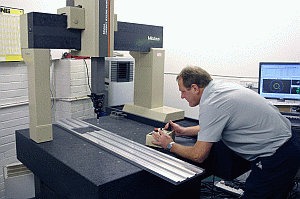 Luckily, Mr Vines was familiar with the benefits of Hurco machines and their Ultimax CNC system from his work at previous companies. The VMX64 is the first machining centre that he has acquired since he bought the Cheltenham subcontract firm from administration in 2003. There are eight pre-existing vertical and horizontal machining centres on site, all four-axis models, which are programmed off-line, batch size on these smaller machines being typically 50-off.

The capacity list also includes four CNC lathes and a new Robofil 300 wire EDM machine that was installed in 2007 at about the same time as the Hurco.