A 22 year-old graduate from the University of Manchester was recently named as the winner of the 2007 Sir Frank Whittle Award, organised by the North West Aerospace Alliance. 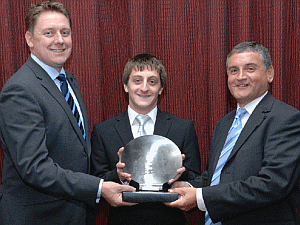 David, from Golcar, Huddersfield, graduated with a masters degree in engineering earlier this year and has remained at the University of Manchester studying for his doctorate in nuclear materials.

The Sir Frank Whittle Award, named in honour of the British jet engine pioneer, has been awarded annually to an outstanding North West graduate since its inauguration in 1999.

A further award, for the region's best “aerospace university” was received by Dr Thurai Rahulan on behalf of the University of Salford.

Almost 130 guests from the aerospace industry, educational institutions and sponsoring organisations attended the presentation, which was held at the Heron's Reach Hotel, Blackpool.

NWAA Chief Executive Officer Martin Right told the gathering that graduates and young people were a vital element of the knowledge base that was crucial in helping the North West aerospace cluster to keep driving forward, compete internationally, continue developing and remain sustainable.

He added: “We need to sell the aerospace industry and remedy some of the misconceptions of previous years. We need to ensure that young people, from junior school age upwards, realise that we are not a back street workshop industry we are exciting, we are high tech, we are science-based and that is our future.”

In addition to the NWAA and Rolls- Royce, sponsors of the awards event included BAE Systems, the Lancashire Learning and Skills Council, the National Skills Academy for Manufacturing and the University of Liverpool.