Turned parts subcontractor, Davromatic Precision, has achieved what it believes to be a world first by developing a measuring system for real- time, in-process quality control of components as they are mill-turned on its multi-axis CNC sliding-headstock lathes, of which there are five at the firm's Rugby facility, all supplied by Star Micronics GB.

Said Davromatic's Managing Director, Martin Ollis (Figure 3), “Being able to carry out 100 per cent inspection of critical dimensions, without handling the parts again, has given us the ability to offer customers a level of service and price that our competition is unable to match.” 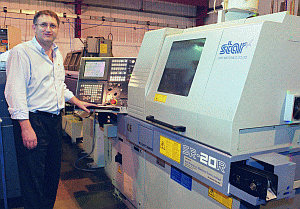 The initiative has paid dividends for Davromatic, which has been able to invest heavily in new plant. Its latest Star lathe, model SB-16D, was installed in April 2007 and the three machines before that, all Star SR-20RIIs with extensive driven tool and rear-working capabilities, were purchased within an 18-month period. The company specialises in work for the defence industry and also serves the, aerospace sector. Davromatic often wins contracts to supply high-precision components produced from tough or difficult-to- machine materials. This type of work tends to be problematic for sliding-head lathes, as they are often of relatively lightweight construction so arduous cutting cycles can cause loss of accuracy. Mr Ollis regards Star machines as the most robust on the market and best suited to machining tool steels, stainless steels and nickel alloys.

The first Star sliding-head lathe, an SR-20R, was installed at Davromatic in 2004, shortly after Mr Ollis won a contract from a well-known car manufacturer for the supply of high- tensile steel bolts in EN16T.

He discovered at the time that the installed weight of Star lathes is typically 25 per cent more than those offered by other vendors. By implication, he concluded that Star machines would be the most suitable for taking heavy cuts in tough metals, both in the main and counter spindle. This has proved to be the case in practice. When producing the steel bolts, for example, comparative cycle time trials showed the SR-20R to be 10 per cent faster than competitive machines.