Prodrive, believed to be the world's largest independent motorsport company, has used its experience in manufacturing components for its race and rally cars to produce lightweight panels for British satellites.

The British company, which is behind the Subaru World Rally Team and the Aston Martin Racing team, has produced nine panels for Surrey Satellite Technology Ltd (SSTL). These panels are major components of the satellite platform structure, which in turn house a densely populated suite of instrumentation and payload systems. Some of these panels are used in the build of a five-microsatellite constellation, which will provide an Earth observation high-resolution imaging capability. Other panels are used in the build of a satellite platform, which will carry an experimental payload to study the ionosphere and monitor the occurrence of lightning activity (Plate 1). 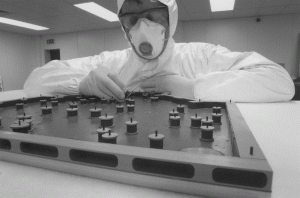 Plate 1 One of the satellite panels for SSTL being assembled at Prodrive's composite operation in Brackley, Northamptonshire, UK

Prodrive combined the skills of its machining and composites business to manufacture the satellite components. Each panel underwent three separate inspections during build and was thoroughly vibration tested prior to being signed off.

“We saw great synergy between our two businesses. Like us, Prodrive is used to developing high technology, high quality components and working to specific and immovable deadlines,” said Martin Day, quality management systems director at SSTL. “Prodrive were enthusiastic to take on a new challenge and successfully delivered a very high quality product within the specified deadlines.”

Tony Butcher, operations director at Prodrive, said: “Our race and rally components get the ultimate test nearly every weekend somewhere in the world and any failure can mean a non-finish. With no pits for repairs while in orbit, component failure is also not an option on a multi-million pound satellite.”