In what is believed to be a unique arrangement in the aerospace industry, Westland Transmissions, Yeovil, UK, – part of the AgustaWestland group, one of the largest helicopter manufacturers in the world – has recently signed an agreement with Exeter-based South West Metal Finishing, part of EIC Finishing Services to out-source electroplating requirements to enable Westland Transmissions to focus internally on its core competences.

In effect, this makes South West Metal Finishing an extension of Westland Transmissions' production process and, says Westland spokesman, Simon Paddock, the Partnership will help the company to respond appropriately to the helicopter repair and overhaul requirements of the Ministry of Defence, in particular, by guaranteeing turnaround times on the plating of critical “high level” transmission components. Westland Transmissions provides integrated support at its Yeovil facility to MoD-operated helicopters, and part of its remit is to strive to maximise flying times by minimising the time helicopters spend out of service.

Although some plating work will be handled by SWMF at its plants in Exeter and Bristol, the contract involved the introduction of a new, dedicated, state-of-the-art cadmium plating line on their Yeovil site – one of the few cadmium plants of its kind to be installed in the UK in the last few years. This line will handle a significant amount of Westland Transmission's overall plating throughput, as cadmium plating is still a vital requirement in the plating of helicopter transmission parts in order to meet strict aerospace industry approvals. Operated on a closed-loop system to meet the highest environmental standards, in line with IPPC regulations, the cadmium line utilises the best available techniques, with maximum emphasis on water conservation, effluent minimisation and energy efficiency. The plant was designed by Marquis Associates and built by Jacquet Weston Engineering.

The plant installed is probably the most environmentally advanced of its kind in Europe and one of the few cadmium plating plants to be installed in recent years. The plant is designed as a zero discharge unit with no connection to the foul sewer and the only point source emission to the air is the discharge of humid air. In addition to processing its own components, Westland also views the installation of the cadmium line as a major opportunity to enhance its repair and overhaul business, and will work with SWMF on seeking additional subcontract plating for the line from other companies.

SWMF has undertaken subcontract plating for Westland Transmission for a number of years, and the two companies have established a very close working relationship. This includes the setting up of process control, and fast collection and delivery procedures. A new computer system has also been installed recently to operate in conjunction with the cadmium and other SWMF operated plating lines, which will interface directly with Westland's in-house production control system (BAAN) and SWMF's own materials testing laboratory. The system will streamline production tracking and parts tracing procedures, including forecasting and the printing of internal documentation; it will also remove the need for purchase orders, enabling plating requirements to be integrated with Westland's forward planning.

One of the most progressive and successful surface treatment and finishing subcontractors in the UK, EIC Finishing Services comprises South West Metal Finishing, Revill Industrial Finishes, South West Metal Finishing (Yeovil) and Neptune Plating, and operates plating facilities in Exeter, Bristol as well as on its own Yeovil site. Revill Industrial Finishes, based near Exeter Airport, offers comprehensive high quality painting and powder coating services. EIC companies serve the automotive, marine, electronics and general engineering markets as well as defence and aerospace sectors and has recently added non – destructive testing to the list of processes on offer – these can be viewed in details on the EIC website: www.eicgroup.co.uk.

The group has gained a number of finishing industry awards for its pioneering and responsible approach to tackling the environmental problems that have faced the industry over the last few years. South West Metal Finishing was one of the first companies in its field to gain the ISO 14001 environmental quality standard and enjoys full IPPC compliance. NADCAP approved, SWMF also holds approvals from most international aviation companies, including Airbus UK, CAA, Pratt & Whitney, Rolls-Royce, and SNECMA Moteurs, as well as AgustaWestland.

Over the last few years EIC has developed into a “one stop shop” for quality sub contract surface engineering and operates a collection and delivery service throughout the UK and Europe by arrangement.

Westland Transmissions manufactures and refurbishes helicopter transmission and drive systems – vital components of the AgustaWestland range of helicopters. AgustaWestland is owned by Finmeccanica of Italy, and has primary operations in the UK, Italy and the USA.

Westland has been associated with the manufacture of aircraft since 1915 when the company was first formed at Yeovil. The company has more than 50 years experience in the production of helicopters and has supplied over 2,500 rotary wing aircraft worldwide.

Today, Westland is a global aerospace company, highly experienced experience in military helicopter markets. It has developed a broad range of capabilities as a prime contractor and a collaborative partner in major aerospace contracts covering aircraft production as well as logistics support and training for a growing number of international defence programmes. Its areas of helicopter expertise include rotor blade technology, avionics and mission systems integration, transmissions development and advanced training services for aircrew and ground crew.

AgustaWestland can satisfy the rotorcraft needs of both civil and military customers with integrated platform systems that encompass all the principal weight categories and missions. Systems on offer range from the innovative 2.5ton light single-engine “A119 Koala' to the 15ton three-engine multi-role “EH101”, now the benchmark in its class. Other machines include the record-selling light twin “A109 Power”, the “A129” combat helicopter, the multi-role “Super Lynx 300”, the new technology “AB139” and “BA609 Tiltrotor”, the “NH90” and the “Apache AH Mk1”.

Finish grinding of turbine components to tighter tolerances, without burning keywords Three varieties of land turbine component are currently produced by Viper* grinding on a Makino A55 horizontal machining centre at subcontractor, Teleflex Aerospace Manufacturing UK. Two are stage-one nozzle guide vanes for Siemens Industrial Turbomachinery AB in Finspong, Sweden, while the third is a shrouded turbine blade for Rolls-Royce in Derby, UK. To achieve the required tolerances and avoid burning, all have their finish grinding operation completed by wheels supplied by Saint-Gobain (Plate 2). 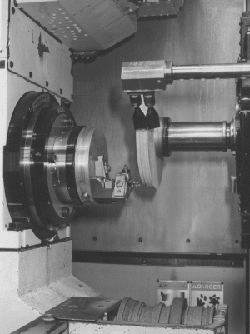 Plate 2 Working area of the Makino A55 at Teleflex, showing a Sirius wheel from Saint-Gobain being used to finish grind the fir tree root form of a shrouded turbine blade for Rolls-Royce, Derby. Diamond rolls for dressing the wheel are mounted on the rotary table below

The nozzle guide vanes are produced in two set-ups from nickel-based Inconel 939 alloy. The surface of these heat- sensitive components used to crack during the all-important final grinding operation after the previous wheel became clogged with sticky swarf. This not only led to surface cracking and porosity, but also made it difficult to hold fine edge features.

Said Phil Chadwick, Customer Service/ Quality manager at the Teleflex works in Dunnockshaw, near Burnley, UK, which is one of the first subcontractors in Europe up to use Viper grinding, “The solution was to replace the wheel for the final grinding operation with a Vortex wheel from Saint-Gobain. It is one of the most open-grained, aluminium oxide wheel on the market and is able to maintain a sharp, accurate profile with minimal heat generation, even when machining difficult metals”.

The porosity is naturally and evenly spaced, without using artificial pore inducers, in a patented manufacturing process at Saint-Gobain's Stafford factory, allowing coolant to be readily absorbed and diffused to the point of cutting. The temperature of the long alloy chips is, therefore, kept low, discouraging clogging of the cutting edge.

“You could physically see the cleaner cut after using the Vortex wheel”, commented John Armitage, Quality Compliance Leader at Teleflex. “The finer features of the guide vane did not drop off as previously and the cooler cut improved the surface finish”.

The shrouded turbine blade for Rolls- Royce's high pressure facility in Derby is made from a nickel-based, high temperature alloy casting and has its fir tree root form and shroud end ground in two successive, single-hit operations. For this component too, Saint-Gobain provides the wheel for the final grinding operation.

Called Sirius, it is another very porous, aluminium oxide wheel in a vitreous matrix (Plate 3). It is used by Rolls-Royce themselves for the last grinding pass on the turbine blade, which is also manufactured at Derby using identical Makino cells. A spokesman for Rolls-Royce said that the fir tree root requires radii as tight as 0.3 μ. The previous wheel tended to break down, struggled to hold tolerance and required frequent dressing, shortening wheel life. It also caused blueing on the surface of the component. 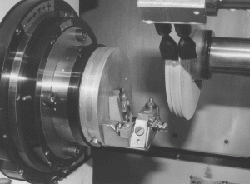 So the same type of Sirius wheel was specified for the process at Teleflex. It contacts the component at a surface speed of 45 m/s for only 10 s out of a total cycle time of 12 m, during which time it imparts the required fine profile to the root and shroud features, with negligible burning. Four interchangeable Erowa fixtures are employed to speed component changeover during production.

Continuous dressing of the grinding wheels during production is available as an option, but Phil Chadwick feels that high volume production is needed to justify the extra cost. At Dunnockshaw, the wheels are preset off the machine to minimise the amount of subsequent form dressing required when the wheel periodically visits the diamond rolls mounted on the rotary table beneath the workpiece.

Continued Phil, “The Viper project is helping us to grow our business. In addition to increasing our aerospace work, we aim also to manufacture in- house our medical division's components that are currently subcontracted out. We have an option on a second Makino A55 Viper machine, which we hope will be installed in 2006.”

The company's vision is to set up a two-machine, conveyor-fed cell with robot loading, five-axis debarring, washing and shop floor inspection by a co-ordinate measuring machine (CMM). If things go well, several such cells will be created and older production plant sold off.

Saint-Gobain products from the group's “Universal” grinding wheel range are used by Teleflex for general machining duties on its Elb grinders. Creep-feed and reciprocating surface grinding, which both involve a large contact area between wheel and component, account for 70 per cent of non-viper throughput and the subcontractor is currently evaluating Sirius wheels for these applications as well.

*Viper is an acronym for very impressive performance extreme removal. Developed by Rolls-Royce, it is capable of stock removal rates up to eight times those achievable when grinding nickel alloys conventionally using a plated CBN wheel. High pressure coolant at 70 bar has to be directed at the point of grinding to keep the component and chips cool.

For example, traditional grinding of nozzle guide vanes at Teleflex previously involved a cell containing ten machines and employing five operators to clamp every part once on each machine. Viper grinding requires only two set-ups on the Makino and one operator.

Repeatability has improved with Viper grinding owing to fewer clampings. As there are no longer repeated set-ups on different machines, cumulative error does not use up the drawing tolerance, so it is rare for a part to be out of tolerance and scrap is, therefore, minimal.