G R Booth, manufacturer of Brunswick precision carbide reamers and a major company in the design and manufacture of all types of special-purpose tooling, is reported to have cut cycle times by as much as 30 per cent due to a new five- axis CMC Helitronic Power tool and cutter grinder from Walter GB of Redditch due (Plate 1).

The company purchased its first Walter machine two years ago and, according to managing director Paul Briggs, it has more than proved its worth. 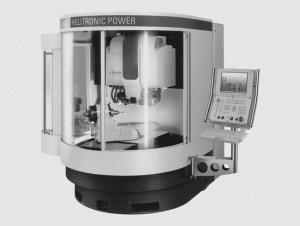 “The service and applications support we have received from Walter has also always been first class”, he says, “so when we decided to buy another cutter grinder, the decision was already made”.

G R Booth specialises in three areas of manufacture. First and foremost is its Brunswick reamer, now used by many blue chip companies including Airbus, Westland, Rolls-Royce and a number of Formula One teams. The company also produces a range of indexable inserts and solid carbide products.

“When we bought our first Walter, we had the intention of loading it with Brunswick reamers. We were finding it more difficult to find traditional skills and we wanted to enhance the quality of the product, so it seemed the logical route. However, once the machine was running, many new areas of business started to arise and, within six months of purchase, the machines capacity was full. We never got the opportunity to address the situation with the Brunswick reamers”.

Towards the end of 2004, however, orders at the Huddersfield plant grew to such a magnitude – particularly from the US – that the only way forward was to invest in another Walter, this time a five-axis Helitronic Power complete with Walter GBs Cyber Grinding three-dimensional simulation package.

“All of our existing machining programs for the Brunswick reamer are held in AutoCAD”, says Paul Briggs. “Using Cyber Grinding, files are automatically transferred to DXF format. As a result, Cyber Grinding has saved us a lot of time”.

Batch sizes for the Brunswick reamer range from 10- to 100-off. “The improvement in cycle times has been vast”, he says. “These products used to be produced on manual cutter grinder machines and I would estimate we have cut as much as 30 per cent from our cycle times”.

The five-axis Helitronic Power is a sturdy machine weighing in at 4.5 tonnes for unsurpassed rigidity and stability. Offering 11.5 kW of power, rapid traverse rates are 15 m/min in all linear axes and 120º/sec on the rotational axes. The machine can accommodate tools up to 350 mm long (300 mm for face grinding) and 320 mm diameter.

“Since it was installed in December, the Helitronic Power has proved an excellent acquisition. Were over the moon about it”.

Asked whether he would recommend the machine to others, Paul Briggs replies: “I already have. The company isnt a competitor so I thought, why not? I know for a fact the technology will not let them down”.