The Boeing 7E7 Dreamliner makes use of new passenger-pleasing attributes which are integral with the economics of the new aircraft which according to Boeing is designed to use 20 per cent less fuel than any other aircraft of its size. It will be available in three versions, as shown in Table I, the 7E7-3 and -8 due to make their first flights in 2007 with entry into service (EIS) the following year, and the -9 whose EIS may be in 2010 but that depends on the demand for this variant.

For some time the Boeing company has been occupied with improving intercontinental passenger satisfaction and yields by better matching seating and fares. These topics have been aired at recent exhibitions and seminars and a typical comment has noted the increase in business class products with the consequence, sometimes, of eliminating first class altogether. Also, an unintended result of increasing fares, etc., has meant that nearly half of intercontinental business passengers fly in economy class. This puts increasing emphasis on economy travel and in addition, whatever their reason for making the journey, some 80 per cent of economy traffic is paying some discounted fare. Economy class generates most of an airline's revenue with its profitability (revenue per square metre of cabin space) akin to business class and better than first class in every case studied 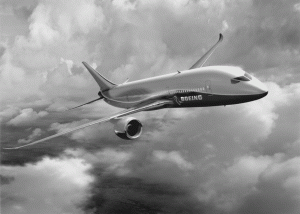 Some intercontinental airlines have a premium economy class with larger seating, this arrangement arguably, only serving a small proportion of the business travellers unwilling or unable to buy up to business class. It is notable that “economy” classes in service today vary by up to 2 in. of effective width per seat. The “solo economy” product (i.e. business traveller in economy) can be characterized by an eight-abreast 7E7 while a “family tourist” product would be a nine-abreast 7E7. This means that in an aft zone of the 7E7 one could gain eight seats over the solo economy configuration. Of course, carriers cannot routinely give economy passengers free upgrades to solo economy class. Financial success for an airline depends on finding the right class mix and booking history by fare category will provide a good basis for determining the appropriate proportion of seats to be configured in solo economy or family tourist.

Further, Boeing research has produced some surprises. The difference between the narrowest economy-class seat and the widest first-class seat is about 4in. Because of the advances in seat design and cushion technology, average leg-room on commercial jetliners has increased over the past 20 years. Boeing is the only commercial jetliner manufacturer whose product strategy offers increased comfort for longer-range flights. For short-range and medium-range flights, on-time performance can be the most significant comfort factor. Surveys show that passengers on a flight delayed by 1h or more feel dramatically less comfortable than those in an identical aircraft that departs on time. This negative impact also applies to perceptions of service, cabin cleanliness and quality.

When one comes to the topic of the “dreaded” middle seat, it is a valuable tool for improving passenger comfort, as explained here. When a middle seat is empty, the two passengers on either side become more comfortable – the comfort equivalent of providing them with an extra 7 in. of leg room, or a seat that is 4.25in. wider. Also, cabin layouts that employ rows of three-seat units maximize the opportunities for enhanced passenger comfort. In such a layout an aircraft must be 67 per cent full before the airline has to seat passengers adjacent to one another – a percentage that is very close to the average passenger load factor. That means that most passengers will experience comfort that is equivalent to a one-class upgrade.

In passenger surveys, the highest comfort levels are reported by passengers seated on the left-hand side of the aircraft with an adjacent empty seat and 7-8 rows back from a bulkhead in single-aisle aircraft or 10-12 rows back in twin-aisle aircraft. That distance from the bulkhead maximises the visual perception of spaciousness. The left-hand side of the aircraft factor is a mystery, but might be the result of right-handed passengers having both a window and unencumbered use of their right hand and arm.

A survey also found that personal space can be interchangeable. Passengers on a long flight in seats that were 17 in. wide reported higher comfort levels than passengers in 18.5 in. seats. The reason was that the airline increased the amount of leg room available to passengers in the narrow seats by 3 in. – slightly more than the Boeing Personal Space Model – indicates that it is required to achieve equivalent comfort. A version of this Space Model is freely available from Boeing to airlines to help them deliver consistent comfort throughout their fleets 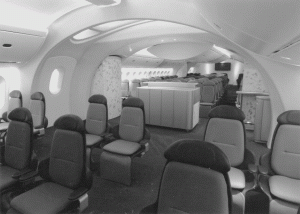 All the considerations noted and are reported to have been embodied in the internal design of the 7E7 together with the initial aspect of sweeping arches at the cabin entrance with dynamic lighting, more spacious luggage bins and electronic window shades whose transparency can be changed during the flight. The arches are repeated at selected locations in the interior, giving a sense of being in well-proportioned spaces. The luggage bins are claimed to be the largest in the industry and have sufficient capacity for man 11×16×22in: (28×40×55 cm) bag for each passenger. When such large capacity is not required it is possible to replace the centre-mounted bins with the simulated sky ceiling treatment which extends the feeling of spaciousness.

The 7E7 cabin is 35 cm wider at sedated eye level than other mid-size jetliners and consequently this provides 4 cm wider per seat than the competition. In an eight-abreast economy seating arrangement, the wider fuselage provides the room for the widest economy seats in the industry at 47 cm. The aisles are typically 55cm wide in economy class and 66 cm wide in business class. The 7E7's windows will be the largest on any commercial aircraft flying (48 cm tall, 28 cm wide), which give passengers a view to the horizon from any seat on the aircraft. The lighting is similarly advanced with the simulated cabin sky illuminated by LED arrays. Both brightness and colour can be controlled in flight by the crew. Flight attendants can give passengers a sense of daylight when desired and also a night time sky when required.

In general, the broad cabin and layout of the 7E7 makes the use of significantly larger lavatories viable in all classes of service – large enough for wheelchair access.

An improved cabin environment is a significant factor. 7E7 cabin height is 6,000 ft (1,830 m), that is some 2,000 ft less than most commercial jetliners flying today. The cabin is climate- controlled which means that humidity is higher than in other commercial jetliners, which helps to reduce the dryness of passenger's mouths and eyes. It has been stated by Boeing that virtually all aspects of the 7E7's interior enhance passengers' comfort and reconnects the passenger with the flying experience.