With the aerospace industry demanding more and more from its subcontract component manufacturers, Produmax knew that it would have to be highly competitive to win a new £1 million contract for aerospace components from Ronaldsway Aircraft based on the Isle of Man. So in order to tip the scales in its favour, Managing Director, Jeremy Ridyard decided the latest Series 3 Citizen M32-V CMC sliding head auto from NC Engineering of Watford, UK, which has added flexibility from two Y-axes operating on the turret and its gang tool slide, would provide the ideal mill/ turning solution for the parts he had to machine.

With over 30 employees, Produmax has nearly 40 years of experience in producing aerospace, medical and telecommunication components. With an annual turnover in excess of £3 million, aerospace has grown to account for up to 65 per cent of business at the company's headquarters in Otley, West Yorkshire, UK.

Keen to move the company forward Jeremy Ridyard, who was a key player in the recent management buy-out of the business, attributes its success to a policy of continual investment in line with financial growth. “Having invested around £300,000 a year for the last four years on machine tools, this has definitely enabled us to maintain a lead against our competitors”, he says.

Jeremy explains how Produmax tends to target the top 5 per cent of contracts in terms of precision and difficulty. “This is because we have very carefully structured the business around our machining capability, quality, service and delivery. The aerospace industry is now very cost-conscious and while we realised that any new machine had to have the capability to perform the task, it also had to exhibit high levels of efficiency and productivity gain.” He explains how the Citizen M32 has achieved this: “Its installation is a prime example of how we can grow our turnover and profitability through careful investment in first class production equipment”.

It is immediately apparent to any visitor that continuous improvement and teamwork are ingrained in the company's culture, a factor that had obviously impressed Ronaldsway Aircraft to place the £1 million contract for aerospace components. Although Produmax already houses an extensive precision machining capability which includes Citizen L20 and L32 sliding head machines alongside multi-pallet, five-axis vertical and four-axis horizontal machining centres, Jeremy could see that this contract demanded something extra special from its machine tools.

He said: “We investigated the different machines that were available and it was after considered opinion that the latest Series 3 Citizen M32-V offered us the best 'one-hit' mill/turn capability that we could obtain to achieve what the contract demanded.” He then explains how certain parts could not have been cost-effectively manufactured without the application of the additional Y-axis cross-feed capability to the turret. “As the contract is made up of over 1,000 components, flexibility as well as speed and ease of set-up were critical factors in our decision and obviously the ability to maintain quality and surface finish were also very important to the success of the project,” he says.

The Citizen M32-V is the latest addition to the M-Series of high performance sliding head machines from NC Engineering. As well as the two Y-axis movements also feature a new 32-bit control with faster processing, new high-speed macros and shorter computing times which means significantly reduced cycle times on parts up to 32 mm diameter.

The faster processing control also enables operations such as thread chasing to deploy high spindle speeds with accurate pitch control as well as high-speed rigid tapping. To ease the minds of setters, a fast cycling program checks automatically for syntax, geometric and format errors, which can be activated at the control without any movement of the machine axes.

Installed at the end of June 2003, the Citizen M32-V includes the Cool Blaster programmable 2,000 psi high pressure coolant unit with vapour extractor. It runs 24 h a day across 4 days of the week followed by single shifts on the remaining days. Parts are manufactured from a variety of aerospace materials including S143, 17-4PH, 15-5PH and S130 in addition to a spread of commercial and aerospace aluminium (Plate 3). 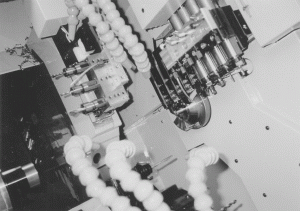 Here, Jeremy emphasises the importance of the machine's flexibility when he outlines that batches range from just five parts up to 5,000 and cycle times vary between 30 s and 15 min. “I am totally convinced we would never have won this contract if we hadn't bought the machine”, he says.

For front and back machining the Citizen M32's ten-station turret has power-driven tools in every position, and with multiple tool holders and half- indexing, can accommodate up to 80 tools. This means tools can be left “as set” in the machine to speed changeovers and the turret can also fulfil functions other than cutting, such as part handling and automatic in-process gauging of tools and parts. Its reliability to machine with three tools simultaneously means cycle times are reduced. For instance, while an outside diameter is turned with a gang tool, it is possible to machine internal features with a tool from the turret. Also, while front-working with a gang tool, tools in the turret can be simultaneously used for back working.

As Jeremy concludes: “Part of the Produmax ethos is to work in partnership with customers, to develop 'least-cost' solutions and we will invest in the best machine tools to produce their components and here, the Citizen M32-V certainly fits into that strategy”.