Central to a newly developed vane production cell was the initial installation by 600 Centre of Shepshed of two Fanuc Alpha T14iB four-axis Robodrills which cut location feature machining cycles for aero-engine blade restoration by over 30 per cent and considerably improved machining accuracy (Plate 1). 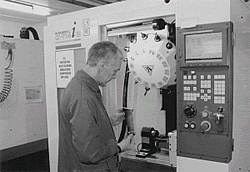 Indeed, such was the success that Airfoil Technologies International – UK (ATI) quickly purchased a third Robodrill that has transformed blade profile operations through the use of advanced scanning techniques, and the subsequent order for a fourth machine – this time a wide bed, four-axis Alpha T14JC model, has added to 600 Centre success by reducing machining times on 610 mm long mid-span blade shrouds by at least 50 per cent.

Based in Ripley, Derbyshire, and employing 300 people, ATI – UK repairs and restores blades predominantly used in civil aircraft engines. The machining facility covers a wide range of components including fan blades, compressor blades and vanes as well as rotating knife-edge seals and discs which are used by all the leading aero-engine builders.

This work tends to be generated by a combination of in-service deterioration and impact damage as well as through OEM and customer modifications and includes all aspects of inspection, repair and overhaul. Once the components are processed they are then certified ready for immediate installation into the engine.

In a typical week, ATI – UK will repair well over 5,000 blades and vanes which are machined from materials such as Jethete, titanium and aluminium in sizes that range from 25 mm2 up to some units which can be up to 1,000 mm in length.

One key aspect of the company's operation is the restoration of the end locating features of vanes which, in service, are subjected to high levels of vibration which leads to deterioration and wear as they rub against each other and repairs have to be carried out every 2 to 3 years. In order to cope with an ever-increasing volume of work, ATI – UK decided to develop a special vane cell which includes robotic TIG welding to build-up any worn surfaces and the two, 600 Centre supplied four-axis Robodrill T14JB vertical machining centres, which accurately re-machine the end fixings after welding.

Development Engineering Manager, Garry Sims, outlined the background to the project: “We decided to improve the efficiency and accuracy of our vane machining and follow our cellular manufacturing strategy where every single part is constantly on the move. We were finding our existing five-axis machining centre was at the limits of both its productivity and accuracy, so we decided to look for a faster, more precise and reliable method of machining.”

He follows on: “After investigating a number of different machining centres we finally selected the Fanuc Robodrill T14iB due to its capability and combination of short cycling, speed – with fast rapid traverses of 54 m/min and quick tool change – accuracy, rigidity, compactness and of course purchase price! The predicted performance of the machine and price combination was so good that we found we could actually justify purchasing two Robodrills, rather than one.”

Clever application engineering by 600 Centre in terms of the Nikken indexer and a specially-made trunnion table allows both the four-axis Robodrills to function as five-axis machines. As part of the application, two System 3R quick-fix pallets are mounted at 908 to each other, a vertical on the indexer spindle and a horizontal on the trunnion table. This ensures any demands on the operator are minimal, all that is required is mid-way through the cycle to transfer partly machined vanes from one station to the other. With this simple procedure, all six-sides of the end location blocks of the vanes can be totally machined.

Prior to re-machining, each vane is located in a workholding fixture which is then mounted on a pallet where three conical pins are utilised for accurate positioning relative to the aerofoil section. End locking screws are then tightened to secure the vane and the whole fixture is then filled with a low melting point alloy which solidifies in order to rigidly maintain the position of the vane. As the ends of the vane are still exposed, they can then be machined in a very rigid set-up after which, the workholding alloy is simply dissolved by placing the complete fixture in boiling water.

Once on the Robodrill, the end locations of the vane are re-machined. The process involves milling away much of the 1.52 mm thick weld deposit to around 0.38 mm on either side which recreates the original dimensions. Three different sizes of carbide end mills are used to profile the complicated dovetail-type end locations and in-cycle probing is introduced on key dimensions.

Owing to the set-up of the cell, one operator looks after both the Robodrills and the machines are run through 12 h shifts, 7 days a week to produce 36 variants of vane. As part of the application engineering, tooling and fixturing is standardised across the range, so the operator only has to call down a fresh program for the next vane type. Each blade is inspected on a co-ordinate measuring machine which is located adjacent to the cell.

As well as reducing the previous machining cycle times of between 25 and 30 min, depending on the type of vane, down to 15 and 20 min, respectively, the Robodrills have created further production advantages, as Garry added. “The rigidity and accuracy of the large spindle on the Robodrill has improved tool life by at least 25 per cent and machining accuracy and repeatability is almost unbelievable, with no tolerance drift or variance.”

He explains: “Being a Six Sigma company means we work to really high standards of precision and the Robodrills are proving well able to hold tolerances to ±0.005 mm, which is well in excess of the specified limits on these parts. What's more, the machines are exceptionally quiet in operation and they have both returned a payback in less than 2 years.”

Following the addition of the specially- developed Alpha T14iC four-axis model by the 600 Centre this replaced a large horizontal machining centre which used to re-machine 610 mm long mid-span shrouds on large fan blades. The machine was passed off at 600 Centre and delivered on a Tuesday, by Wednesday morning it was commissioned and in production the same afternoon.

The process involves facing one side and then manually adjusting re-setting for the other side of the shrouds which have been refurbished again using TIG welding techniques. While the components are quite large, the milled shroud tip area is only around 6 mm wide by 50 mm long so the 600 Centre solution allowed the machining of these protrusions to be carried out in a single, one- hit operation at least 50 per cent faster than could be achieved before.