According to USF the use of PMB in conjunction with the Vacu-Blast "Closed Circuit" system has become a recognised method of selectively removing paint from wings, fuselages and structural components, without damaging the aluminium or titanium substrate or underlying surface treatments such as anodising. This precision surface preparation task has been adopted as an integral part of standard inspection procedures of critical surface areas undertaken on many civil and military aircraft during repair and overhaul operations.

PMB enables layers of paint to be progressively removed by a skilled operator and also "blended" where necessary, to provide a smooth surface for subsequent repainting. As well as its use in aerospace, the technique is also said to be ideal for other paint removal situations that require a "delicate" approach (Plate 5). 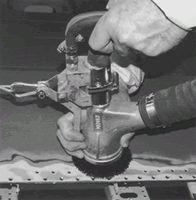 Plate 5 Plastic media blasting enables layers of paint to be progressively removed by a skilled operator and also "blended" where necessary, to provide a smooth surface for subsequent repainting

Another major advantage claimed of using a Closed-Circuit machine is its mobility, enabling it to be moved easily to any required location within a production or factory area.

With the Closed-Circuit system, the blast gun both delivers the abrasive blast media and recovers it simultaneously by vacuum, together with resultant dust and debris. The machine's mobile power-pack then automatically separates out reusable media and recycles it to the gun.

USF Vacu-Blast Closed-Circuit machines come in high-throughput pressure-fed and less intensive suction-fed versions, in a range of sizes to suit low and high capacity applications. They can be used with all types of abrasive blast media. Special blast guns are available for processing angular and profiled surfaces, edges and large flat areas of floor or decking. A special phosphor-bronze brush is also offered for cleaning hot welds.