Turboprop gets the Vacu-Blast treatment

Turboprop gets the Vacu-Blast treatment

The unusual Piaggio "P180 Avanti" executive aircraft (Plate 2), with its twin rear propellers and three wing design, is claimed to be the fastest turboprop powered plane in the world. Although the first prototype flight of the aircraft was in 1986, Piaggio Aero Industries, based in Genoa, Italy, has recently updated and relaunched it. 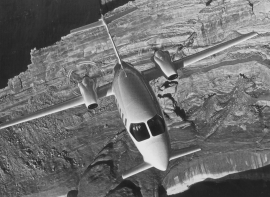 The P180 is one of a number of aircraft produced by Piaggio which utilise engine components processed in abrasive blasting machines manufactured by the UK-based USF Vacu-Blast International. The machines are also used by Piaggio to process parts for the Rolls-Royce "Viper" jet engine, which powers the "MB339" Aermacchi aircraft flown by the Italian Air Force "Frecce Tricolori" aerobatics team.

Piaggio's first Vacu-Blast® cabinet machine was introduced back in 1964 for cleaning turbine blades, and since then the company has bought a number of other cabinet machines as well as "closed-circuit" mobile blasting systems, for a variety of surface preparation, treatment and finishing operations.

The USF Vacu-Blast Ventus® abrasive blasting cabinet machine range is said to be one of the most comprehensive in the world, and offers over 230 manual, semiautomatic and automatic variants, covering all kinds of surface preparation, treatment and finishing tasks.